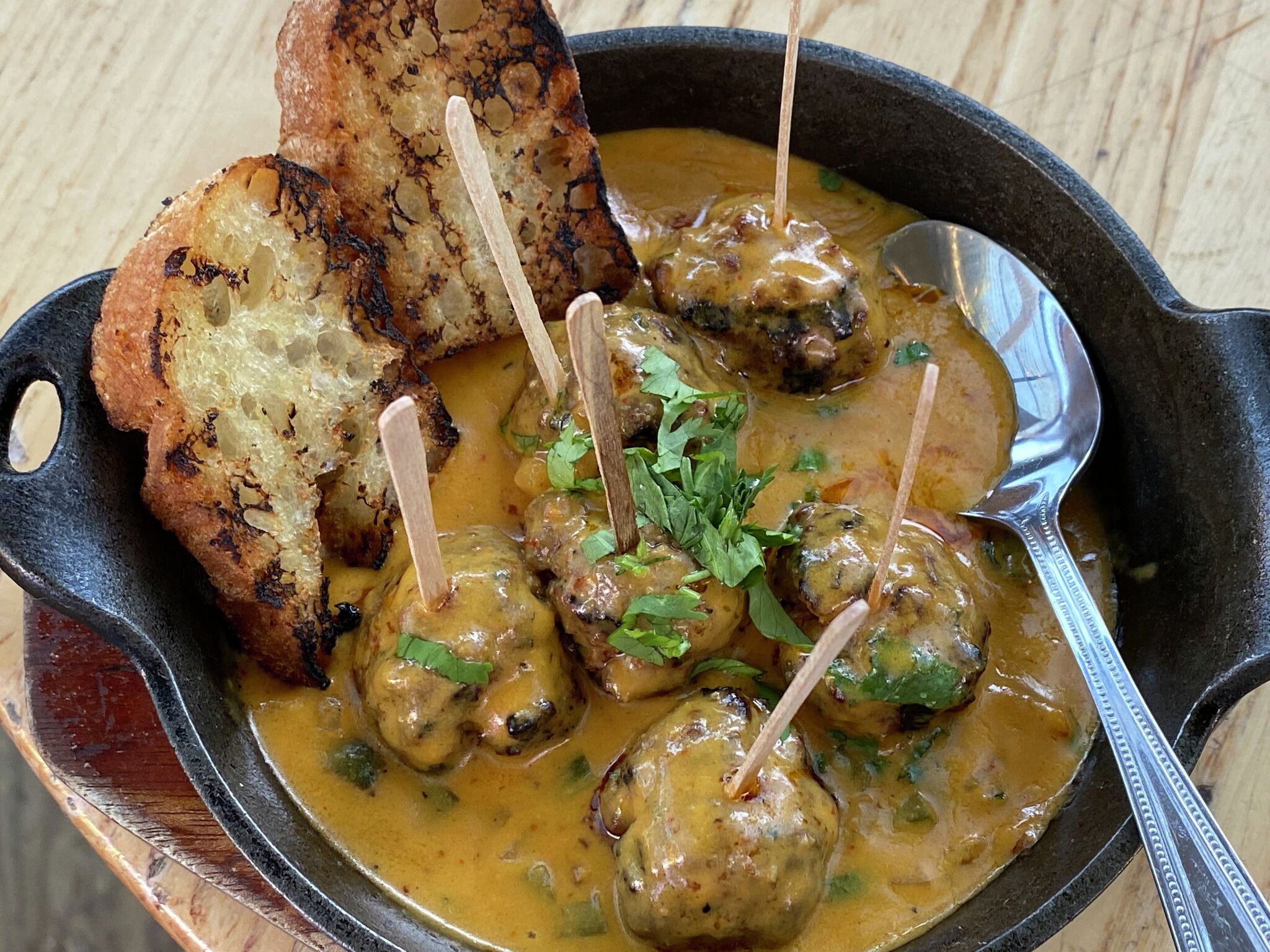 San Francisco is home to such a diverse spread of cultural dishes that there’s no way SFGATE’s food team could cover them all in one swoop. With the cost of living hitting our dining budgets the hardest, we sought to cover as many affordable appetizers as our stomachs would allow. Together, we tasted everything from playful Nepali tapas with spicy tamarind water, the crispiest patatas bravas imaginable, and even got the scoop behind a North Beach favorite in the form of a cheesy stuffed golden bell pepper.

If you’re a foodie at heart and want to keep your appetite satiated while on a budget, we got you. Here are some of the city’s tastiest appetizers that will be kind to your wallet while filling your belly.

There is no better place to be on a San Francisco summer evening than Red Window. The North Beach Spanish restaurant’s sun-soaked parklet and colorful plant-filled indoor seating are equally appealing, but on a recent visit, I got the best of both worlds: an indoor table right by the open window. While sipping on low-proof sherry cobblers with a friend, we snacked on a variety of tasty tapas: smoked salmon crostinis, crispy mushroom skewers, roasted carrots with salsa verde and chilled octopus with romesco and potatoes. The highlight, though, was the patatas bravas ($10). That’s because these are no ordinary patatas bravas.

Rather than the usual fried potato chunks, Red Window’s patatas bravas are actually made from a baked potato cake of 50 thinly-sliced layers, which is then cut into cubes and fried. Eight of these aesthetically-pleasing golden brown cubes are then presented to the lucky diner with a generous drizzle of aioli and peppery bravas sauce. The result is perhaps the crispiest bite of potato imaginable, each rectangular corner shattering in your mouth to reveal pillowy insides. To maximize the delectability, each bite should be dipped in as much sauce as possible (I don’t make the rules). The seafood rice dish we ordered as an entree was also delicious, but it’s not what I think about when I go home at night — it’s those impossibly beautiful, impeccably crispy little potatoes. That’s a winning appetizer in my book. — Madeline Wells

Deep in the outskirts of the Mission there’s a new cocktail bar, Madam Racecar, that sits in the former Asiento building. The muraled exterior features a galaxy of eclectic gizmos floating through different tentacles of blue, maroon and teal spirals that cover the entire facade. Past the visually stimulating exterior, Madam Racecar is owned by former Asiento proprietor Debi Cohn. Cohn, along with bar manager, Sven Forner, created a small but mighty menu of appetizers that pair extremely well with their killer cocktails. One that stood out was the Red Thai Curry Meatballs for $12.

The all-beef meatballs, which came speared with toothpicks for easy pick-and-plop-in-your-mouth-ability, were studded with spices that reminded me of a merguez sausage. The velvety red coconut curry had diced pickled jalapenos throughout, which conjured memories of a softer, more subtle version of ballpark nacho cheese. It was spicy. The meatballs were tender. It was an extreme pleasure to munch on while sipping the mezcal-focused Lion Oil cocktail that’s offered under the watchful eye of a delightfully quirky nebula of trinkets. — Nico Madrigal-Yankowski

Step inside Piroo on Polk Street, a new restaurant serving up Nepali flavors scented with garlic, ginger and cumin, to find an intimate dining experience with a handful of delicious appetizers, including the PaniPuri ($9). Eight crisp rounds are hallowed in the center and come stuffed with savory potato filling speckled with red onion. The kind waitress explained how to eat this interactive dish: swirl the carafe of tamarind-flavored water to blend all its spices, then pour the earthy liquid onto each delicious dome.

Every bite packed a satisfying crunch from the sturdy outer shell, followed by the soft, well-seasoned potatoes and plenty of warmth and brightness from the spicy liquid. It’s always fun to play with your food, and at Piroo, guests can choose the spice level of the tamarind water to pepper each flavorful round to their heart’s desire. I, of course, went with spicy. Piroo opened in March and is a welcome addition to the corner of Polk and Post streets, offering Nepali tapas, sweet and tart raspberry-ginger lemonade, and an extensive wine and craft beer list. Pro tip: Snag a window seat to enjoy your meal from one of the best spots indoors. — Steph Rodriguez

Like many success stories, this one was unintentional. Some 25 years ago at the vibrant Italian eatery Trattoria Contadina in North Beach, a couple of cooks in the kitchen began repurposing the Mediterranean ingredients at hand to recreate dishes from their native homes in Mexico and Guatemala. They sliced a golden pepper and stuffed it with three Italian cheeses (bel paese, asiago and mozzarella), simmered it until gooey and then topped in a homemade tomato cream. Even if parsed with a sharp knife, the bites of cheese-coated pepper pour from the fork triggering a swift two-hand performance with a slice of sourdough. The remaining bread soaks up the tomato cream to complete this antipasti with a near spotless plate.

The roasted bell pepper made its debut during informal staff dinners but quickly earned admirers. At first, however, there was apprehension if it should join the menu; although composed of Italian ingredients, this is nothing you’d find in Rome. The outlier has now become a predominant fixture on the Trattoria Contadina menu. Although you’d never find this appetizer in Italy, the fusion of culture and cuisine (with a touch of chance) makes this an unequivocally San Franciscan dish. — Silas Valentino

If you’re not a seafood fan, I know of one dish that just might change your mind. (It changed mine!) The original location of Brenda’s French Soul Food sits only a couple blocks from City Hall. When I told a few friends I was headed there, just the mention of the popular restaurant seemed to vicariously excite them. Upon arriving, I immediately saw why. Despite it being the busiest of lunch hours, Brenda’s employees made it feel like I was in the South with their hospitality, seating me right away and checking in consistently. With the skylights beaming down as Marvin Gaye and Tammi Terrell’s “Ain’t No Mountain High Enough” played in the background, I decided to order the crawfish beignet ($4.50 each, but I ordered two), aka the best beignet I’ve ever eaten.

Granted, I’m not well-versed when it comes to beignets, but my best bet is that Brenda’s ranks high among beignet connoisseurs. The crisp outer shell delivered big on savory pastry flavor, followed by a run-in with its softer insides. The cayenne seasoning perfectly peppered the seafood interior, and neither flavor overpowered the other. Its outer dough was never dry, yet held its structure until gracefully collapsing in on itself with every bite, with scallions and plenty of cheddar creating a pleasantly chewy texture. After finishing both, I was satisfied but eager to indulge in more soul food. And at the end of the day, isn’t that the goal of an appetizer? — Zach Zafran

Editor’s note: This article was corrected on July 7, 2022 to reflect that Madam Racecar is solely owned by Debi Cohn.