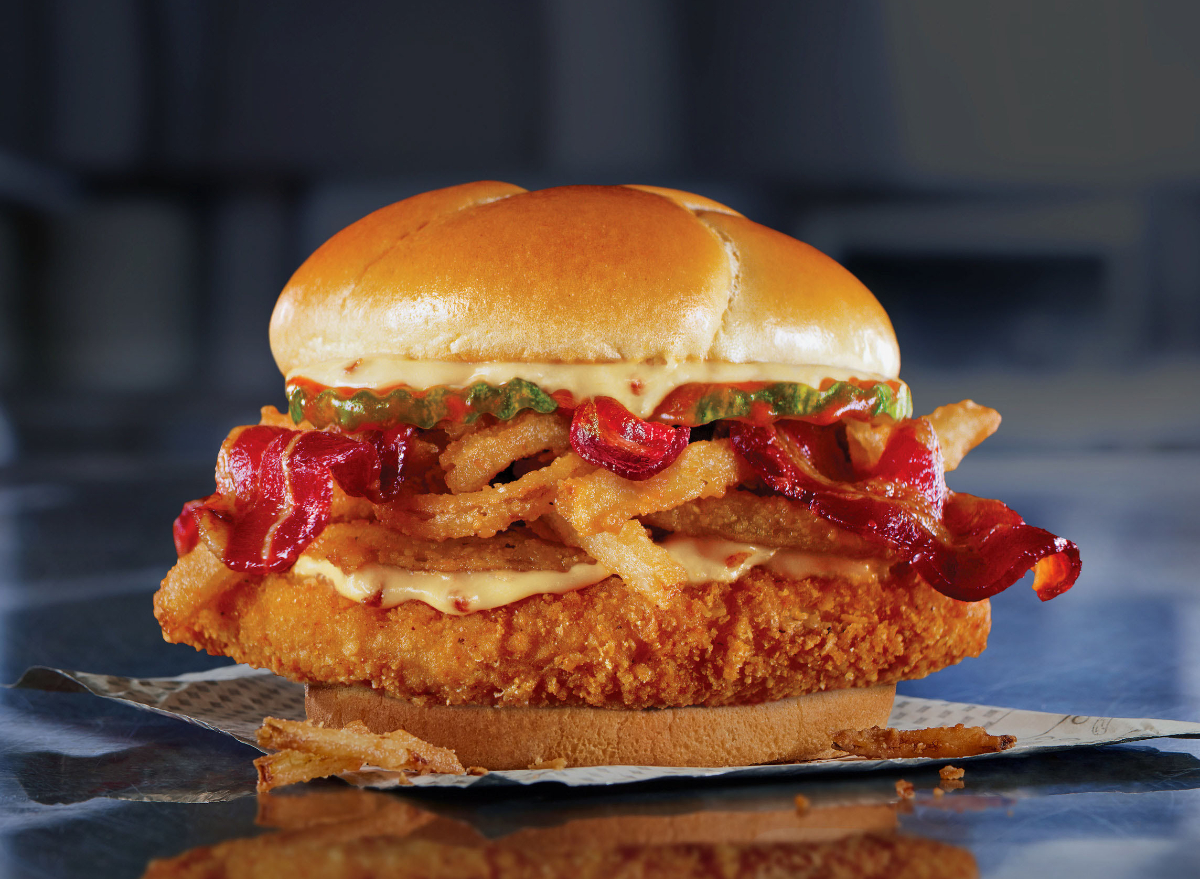 Like most Americans today, you are on the go and don’t have time to cook every meal. Too often, perhaps, you find yourself in your car, stomach grumbling, getting hangrier by the second. Your eyes dart around like a lion seeking its prey. However, unlike the lion in Africa, you’ve got choices a-plenty for a quick-and-easy meal.

With fast-casual dining establishments clustered along city streets and stuffed into shopping centers coast to coast, your only concern is deciding where to go. Suddenly, your eyes lock on a location, and in the time it takes you to sing along to Shawn Mendes’s “Holding Me Back” in your car, you’ve whipped through the drive-through and now have your hands on a steaming hot, savory sandwich. Easy breezy, right?

The question is, have you ever thought about the nutritional content of your sandwich selection? Is it the right choice for your particular health needs or fitness goals? Do you even know how many calories you consume each time you dine out?

Registered dietitians Karen Smith, Amy Shapiro, and Stephanie McBurnett would say, NOPE! We teamed up with these three experts to examine the nutritional content of a bevy of sandwiches currently residing on fast-food menus nationwide and rank them from bad to worst. They also offer some alternative options for healthier choices.

RELATED: 10 Fast-Food Burgers To Stay Away from Right Now, According to RDs

When you hear “farmhouse,” you might instantly think healthy and hearty. Well, you’d be right about the second part. This breakfast sandwich features a cheesy hash brown bagel stacked with two (not one!) eggs, bacon, ham, cheese and cream cheese would definitely be considered hearty (Read: large and plentiful). So, unless you’re a farmer working in the field burning all those hearty calories, Smith says you should avoid starting your day with this breakfast sandwich.

“Choosing this for your first meal of the day means you will consume more saturated fat—the type of fat associated with increased risk of heart disease, insulin resistance, and type 2 diabetes—than the American Heart Association recommends to consume in an entire day,” says Smith, who works at the Barnard Medical Center in Washington D.C. and is also a certified diabetes care and education specialist. “In addition, there is an abysmal amount of fiber, which helps lower cholesterol and feed good gut microbes, since every ingredient from the eggs to the meat to the multiple types of cheese is an animal-based food and has zero fiber. The measly 3 grams of fiber comes from the highly refined bagel and grease-laden hash browns.”

Instead, Smith suggests choosing steel-cut oats with strawberries and pecans (Panera Bread serves this before 10:30 a.m.) or making yourself a hummus or avocado and veggie sandwich, like this one, at home and eating it with a side of fresh fruit.

Del Taco may have gone where most Mexican fast food restaurants have not with its newly launched tortas (a.k.a. sandwiches), but should they have? These three new tortas served on 7-inch toasted rolls pack plenty of calories and fat, especially the Chicken BLT Epic Torta made with grilled chicken, bacon, ranch, cheddar, shredded lettuce, and pico de gallo.6254a4d1642c605c54bf1cab17d50f1e

“These sandwiches contain none of the foods that the World Health Organization defines as being part of a healthy dietary pattern—fruits, vegetables, legumes, whole grains, and nuts—unless you count the small amounts of lettuce and pico de gallo, added to them mostly as a garnish,” Smith says.

If you’re trying to reduce sodium in your diet, the Chicken BLT is not for you. Shapiro, the founder of Real Nutrition NYC, warns, “This sandwich contains more than the recommended amount of sodium for the day and is high in saturated fat and carbs, all raising the risk for possible disease. It is also very high in fat and carbs, which can lead to increased risk for high cholesterol and triglycerides.”

A better option, according to Smith, would be a veggie-filled (lettuce, tomatoes, onions, and jalapeño peppers) black bean burrito from Taco Bell; hold the cheese, sour cream, and meat, and add seasoned rice. With guacamole, the total fat is 11 grams and without is 9 grams, she says.

Zaxby’s Signature Club Sandwich hit the market earlier this year. This modified version of the brand’s Signature Sandwich adds two slices of bacon and American cheese to the mix with a choice of Zax sauce or Spicy Zax sauce. It clocks in at a whopping 820 calories with 46 grams of fat and 52 grams of processed low-fiber carbs, which, Shapiro warns, can lead to increased cholesterol and weight gain.

Smith suggests a healthier option would be a house-made black bean or another type of veggie burger. Skip the cheese and mayo, and sub lettuce, tomato, onion, ketchup and/or mustard. Bonus points if mushrooms are available as a topping!

This sandwich is stacked with grass-fed beef, aged white cheddar, pickled red onions and horseradish sauce and served on an artisan ciabatta bread. According to Shapiro, this sandwich contains almost a full day’s worth of calories for some individuals and is very high in fat and saturated fat, which can raise cholesterol levels and lead to heart disease. Additionally, it is a high-carb food that’s low in fiber, which can promote blood sugar irregularity and health precautions down the road.

Stephanie McBurnett, registered dietitian and Physicians Committee nutrition educator, points to the sodium content as a concern. “The sodium content in this sandwich may wreak havoc on your body and blood pressure,” she warns. “The American Heart Association states that excessive sodium levels over 2,300 milligrams per day may increase blood pressure and cause swelling, puffiness, and bloating.”

Instead, McBurnett suggests to “hold the cheese and add veggies to reduce the amount of sodium in the sandwich. Or, better, opt for the tempeh bacon, sprout, and tomato sandwich loaded with healthy fiber and much less sodium.”

The mother of all chicken sandwiches, this selection boasts crispy chicken smothered in a beer-flavored cheese sauce swimming with bacon pieces and topped with bacon slices, spicy pickles, and crispy onions. Talk about taking a crunch out of your diet goals. According to McBurnett, this fast-food selection is so high in saturated fat, cholesterol, and sodium that if she were your mother, she would not let you eat it!

“This sandwich even has trans fats, which the FDA has deemed no longer ‘Generally Recognized As Safe’ due to their effect on raising LDL cholesterol,” she says.

Instead, you could “86” the bacon strips and cheese sauce if you want to lower the bad-for-you ingredients. But, because the chicken breast alone has 29% saturated fat, you are better off switching to this rainbow hummus sandwich, McBurnett suggests.

“This deli sandwich should come with a warning label because it has almost three times the recommended amount of saturated fat you should consume in one day!” McBurnett warns. “High saturated fat intake puts you at higher risk for type 2 diabetes, obesity, and cardiovascular disease.”

McBurnett recommends skipping the mayo, bacon, and cheddar cheese to reduce the saturated fat of this sandwich, or simply skip it altogether.

“I know why they named this sandwich the Ch’King because the calories and sodium amount are king-sized,” McBurnett says. “Just in this sandwich alone, you are consuming over half the recommended calories for a full day [based on a 2,000-calorie per day diet] and double the amount of sodium than what you should consume each day.”

Instead, opt for a Burger King salad, which will dramatically lower your overall caloric and sodium intake, McBurnett says.

Subway’s online menu description says this is the kind of sandwich you’d get from an Italian grandma. Loaded with meatballs drenched in marinara sauce, The Boss also stacks mozzarella with pepperoni and comes on Italian Herbs & Cheese bread.

Shapiro flat-out says this sandwich is “too high in everything including calories, fat, and sodium. This is an unhealthy choice and should be avoided if you have any health goals in mind.”

To reduce the sodium, she recommends removing the cheese and pepperoni. “But, by switching to a salad, or these barbecue style portobellos, your blood pressure will benefit most.”