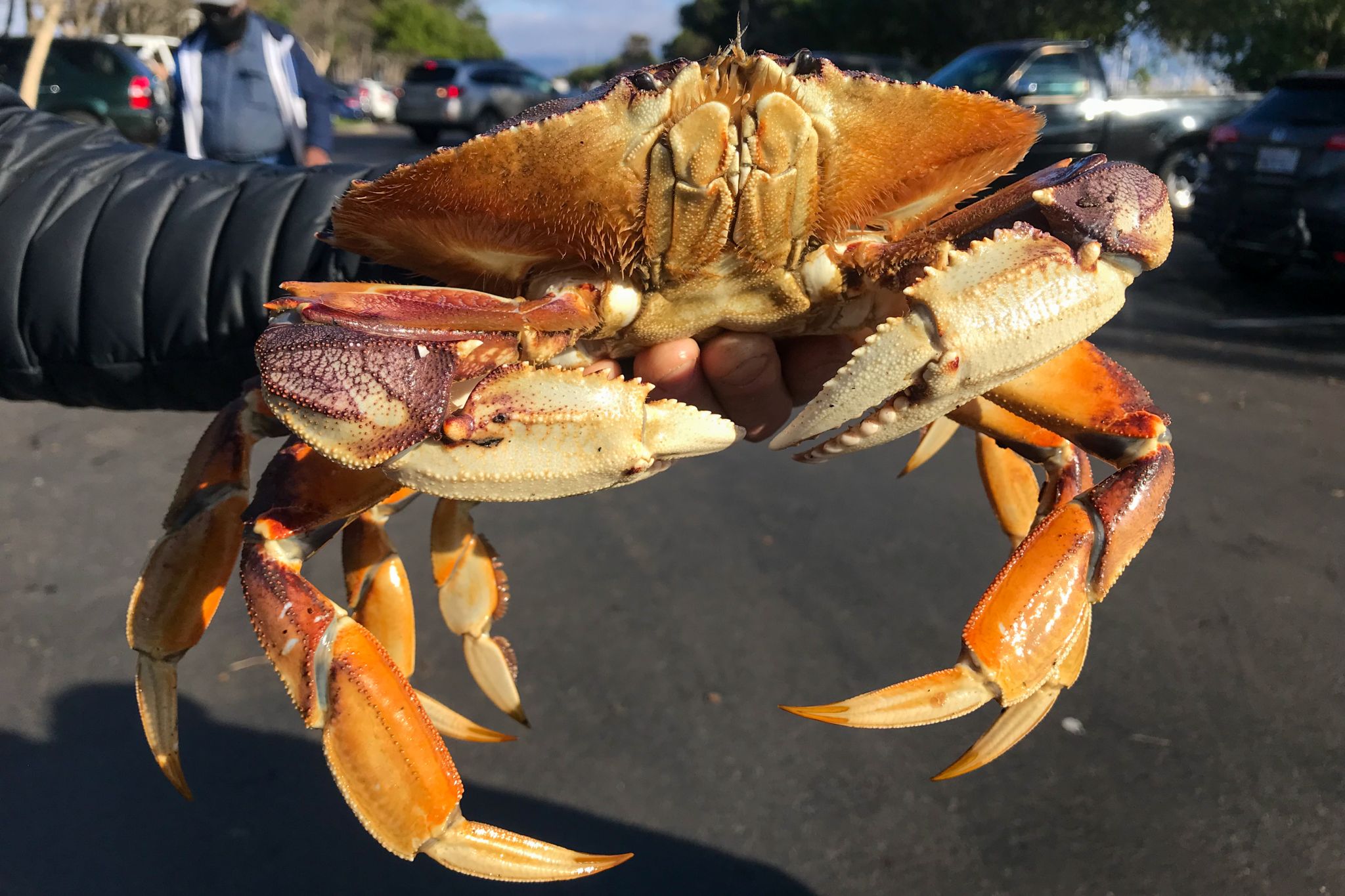 As I peered down at the disemboweled crustacean on the Ikea cutting board in front of me, I wondered what the hell I had gotten myself into.

A thick layer of steam shrouded the kitchen of my tiny San Francisco studio apartment in a seafood-scented haze. My tools were laid out on the counter like an assortment of surgical instruments in a high-stakes game of “Operation”: Tongs. A bottle of Kosher salt. A stainless steel mallet. An oyster shucking knife. I was already wearing a pair of Level 5 cut-resistant gloves.

The echoing, chintzy synth of Paul McCartney’s “Wonderful Christmastime” played from my laptop in an attempt to set a festive mood. With each “ding dong” becoming more distracting than the last, I shut it off, unable to concentrate.

I focused my attention on its eyes. Oh God, its eyes. They bulged from the freshly-removed top shell of its angry red carcass, as if to say, “How could you do this to me?”

Just then, my boyfriend came in and started to wiggle the creature’s claws, imitating Mr. Krabs’ laugh for comedic effect. I slapped him away.

“Whoa, crabzilla over here,” he joked.

But I had willingly volunteered myself for this endeavor at the behest of my editor, who insisted that I experience a true Bay Area holiday tradition firsthand: killing, cooking, cleaning, and eating a Dungeness crab with melted butter and Mexican beer over a tablecloth of newspaper.

The problem? I’m an ex-vegetarian who grew up in Iowa, and I’d never cooked crab in my life. A bigger problem could have been acquiring the prized holiday centerpiece, as Dungeness crab season has been delayed in the region for the fifth consecutive year. (The California Department of Fish and Wildlife announced on Wednesday that it’s expected to open up on Dec. 29.)

But once again, my editor had a line, which is how I found myself wandering through the parking lot of the Emeryville Marina on a recent Saturday morning.

With a 12-quart Igloo ice chest in hand, I observed a couple of joggers and dog walkers and sailboats floating along the docks — a promising sign.

But there was no obvious queue. No fishers in sight. It was like heading into a crab speakeasy.

My ears perked up when I overheard a man’s voice asking someone for a reservation number. Jim Penn, a lifelong fisherman based in Martinez, stood on the bed of his truck, while a handful of people surrounded him on the pavement below carrying their own ice coolers. Every so often, he’d reach into an 82-gallon tub behind him and retrieve one of the live crabs inside, extending its wriggling body toward one of the customers.

“Thank you, Mr. Crab!” a little boy in a Spider-Man shirt said to Penn, who grinned in response. He didn’t seem to mind the new title.

I joined the line next to Constantine Mouratidis, who drove here from Oakland. Originally from British Columbia, he said he always ate crab for Thanksgiving growing up. Katrina Lopez, also from the East Bay, told me she planned to boil and freeze her crab and make gumbo with it for Christmas.

“It’s hearty, it’s tasty, and it brings my family together. And more people want to come celebrate with us when we do have it,” she said with a laugh. “We eat it as often as possible.”

Brian Lee, who moved to Richmond’s Marina Bay a decade ago, proudly showed off his bounty to me: two jumbo Dungeness crabs and two smaller ones that seemed to cower in their presence. He said his favorite way to serve crab is “stir-fried, with lots of garlic and dried chili peppers.”

“I don’t know how it became a tradition in the Bay Area, but it’s always been a staple in Black and Asian communities,” he said. “We just grew up with it.”

What makes the dish special to him is the ritual of it. Unlike ham or turkey, it’s not an entree that’s simply prepared, cut into and eaten.

“With crab, you have to work at it. You take your time with it,” he said. “You know when everyone sits down to eat a big meal and it gets all quiet? With crab, you crack the shell, take a bite, talk. It brings people together in that way, I think.”

All of the customers said they come to this parking lot just about every time they receive an email from Penn. He and his son Hayden, a former professional baseball player, are the owner-operators of PTZ Fishing, which has a mailing list of hundreds of people from all over the bay. Penn sends out an alert whenever they have a fresh batch of crab, and usually receives an overwhelming number of requests in response.

“Right now, especially, it’s really hard to find it,” said Penn. “My buddy sent me a picture the other day — it’s $22 a pound at Costco just to buy it frozen.”

Penn insists that his own crab is not only cheaper at approximately $10 per pound, but it’s also better quality. Crabs are usually sold to customers on the same day they were caught, if not the next.

“And I can tell you, there is definitely a difference,” he said.

Today’s crab was fished from the waters of Fort Bragg — north of the Sonoma-Mendocino county border, where commercial crabbing is permitted — and Penn’s crew left at 3 a.m. the day before and returned at 8 p.m. that evening with 650 pounds of it. He said this was sparse in comparison to catches from previous seasons, where they’ve brought home 800 to 1,000 pounds of crab. But after missing the Thanksgiving market this year — which was postponed to protect endangered whales from becoming ensnared in fishing nets during migration — he didn’t want his customers to lose out on Christmas, too.

“It’s a big event for a lot of people. It’s not just a meal,” he said, adding that he has fond memories of going to the Colombo Club with his own family for crab feeds when he moved to the Bay Area in 2002. “We’re carrying on something that’s always been very prevalent here in the bay.”

Penn drops one of the crabs into my ice chest with a soft plunk. After I shut the lid, I try to ignore the fact that I can hear it crawling around inside as I call a Lyft and mentally prepare myself for the 14-mile journey back to my apartment.

Surprisingly, the driver says nothing about my captive stowaway. I look out the window and attempt to avoid the strange feeling swirling around in my gut that I recognize is guilt. “Crabs are just bugs of the sea,” I thought, reminding myself of a similar line from the David Foster Wallace essay “Consider the Lobster.”

At home, I plastered my kitchen table with the Sunday New York Times and gently set the crab on top of a feature spread about TikTok influencers. When it came time to do the deed, I dawdled, watching the same how-to YouTube videos over and over again. Somewhere deep down, I hoped they would serve as a kind of exposure therapy.

I knew that smashing the crab’s shell open on the corner of my countertop prior to steaming it was supposedly the more humane way to do it, but when I tried to pick up the crab’s hind legs like a purse, as one video from author Becky Selengut instructed me, it writhed in my grasp and I nearly dropped it onto the floor.

It was time for my backup plan. One of my neighbors, Alec Hawley, had kindly suggested that I bless the crab and thank nature for its beauty and sustenance before quickly stabbing it through the head with a knife.

I turned to my boyfriend. “Any nice words for the crab?”

“Hope you taste good,” he said.

I removed the crab from the ice chest again, and it now appeared to be in a stasis from the cold. I set it down on the newspaper belly-side-up, and held the knife inches away from the apron  — the pyramid-shaped flap near its tail. I pantomimed how I would plunge the knife through its shell once, twice.

Then, squinting my eyes, I went for it.

I heard a crunch.

I had missed, stabbing it in the leg.

Humanity was clearly out the window at this point, so I quickly tried again, this time successfully killing it. The crab’s legs wavered slightly as if it were doing bicycle crunches in slo-mo, then fell. A grayish liquid oozed over the newspaper and bold text that read “Meet the culture drivers of 2021.”

I submerged the crab in a pot with a steamer basket and set a timer for 15 minutes. Then, I peeled the gold foil from a bottle of Modelo and took a giant swig. The worst was over, or so I thought.

When the timer went off, I lifted the glass lid, which was dripping with condensation. I removed the ruby-colored creature with tongs and placed it in a colander in my sink, running cold water over its body as steam rose and clouded my windows.

Once the crab had cooled down, I flipped it over and removed the apron. A snotty, purple globule came with it that slightly resembled an earthworm.

“This is a rite of passage,” I said aloud to no one in particular.

Then, it came time to remove the top shell. As I tugged it open, it made a crunch that sounded somewhere between a snapping branch and a soda can that had just been cracked open.

At this point, I was making vague guttural noises of disgust. Inside, I saw a black mushy sac near the crab’s rear and a dark yellow substance that kind of looked like mustard. As I removed the soft gray gills, the jaws and intestines, I had a flashback to the time I had to dissect a frog in 10th grade biology class. “This is what you people call a delicacy?” I thought.

Then, the YouTube video informed me I had to break the crab in half “like a book” before twisting its legs off in sections.
After a few minutes of swearing and peeling, I collected my bounty and returned it to the kitchen table. That’s when I cracked open the tip of one leg and dug some of the meat out, sneaking a bite.

The flavor was juicy and sweet, with a delicate texture that dissipated on my taste buds. My eyes rolled back in my head and I uttered something incomprehensible before handing a morsel of the savory meat over to my boyfriend, who had a similar response. We sat down to eat the rest of the crab, crouching over snapped-off bits of shell and dipping the meat in melted butter with a side of fresh sourdough and Caesar salad. I nearly forgot the mildly traumatizing process that brought me to this moment as I thought of what Lee had told me earlier — that eating Dungeness crab was a process innately savored, but more importantly, it was an experience best shared with others.

As we laughed and chatted, it dawned on us: We may have found a new holiday tradition.