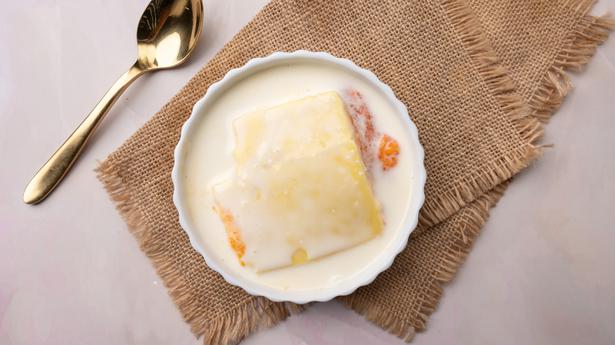 Guess what is reigning in Hyderabad’s meetha scene? It is not an ice cream flavour, nor a mithai, not even a chocolate-based preparation; it is an assembled dish and is not Indian at all. Apricot delight is the star dessert at weddings, parties and even after a traditional Telugu meal. More restaurants are including this dessert on their menu. Food trend trackers note that the first eatery in Hyderabad to introduce this ‘glorified Indian style dessert’ is Spicy Venue in Banjara Hills; it was first introduced as a kitty party special in 2001. In the last couple of years, the different versions of this dessert with the same name at several restaurants in the city made the owners of Spicy Venue file for trademark of the dessert’s name.

Not that Hyderabad needed an introduction to apricot. Khubani ka meetha made from dried apricots has been a traditional favourite at celebrations. So what is new about apricot delight, you may wonder. Sampath Thumula, owner of Spicy Venue explains the origins of his apricot delight: “With constant requests for something new and different, my father late L Ravinder Kumar created this dessert.” Until recent times no one had the name Apricot delight on their menu but when the dessert started appearing on menus of eateries that serve Arabian dishes, chaat and at cafes, Sampath asked his legal team to file for a trademark in 2020.

A simple search results in at least five restaurants across the city offering the dessert.

Sampath explains “Of late, many restaurants have been making their own versions of the dessert calling it ‘Apricot delight’. Since it is a simple dessert many others are also copying the dessert itself and putting it on their menu with the same name. I wanted to protect the originality of the dessert and decided to apply for a trademark.”

Ravinder K, head of Sampath’s legal team explains, “Trademarking the name of a dish includes everything about the dish, from ingredients to how it is prepared. Patenting is for intellectual properties that benefit mankind. It is only valid for 20 years. So, I suggested to my client Sampath that he apply for trademark of the name of the dish.”

What is apricot delight?

Apricot delight is made with puree of apricots that have been soaked overnight in water. The soaked apricots are cooked with sugar and spread between slices of sponge cake. Runny custard, cream and milk are then poured over it.

Many restaurants replace custard and cream and condensed milk to further enhance the sweetness quotient of this dessert.  Variations to the recipe range from adding dry nuts/ fruits or replacing the cake sponge with chenna (a sweet with flattened paneer).

Whatever the avatar or name of the final dish, clearly Hyderabadis love their apricot-based desserts.