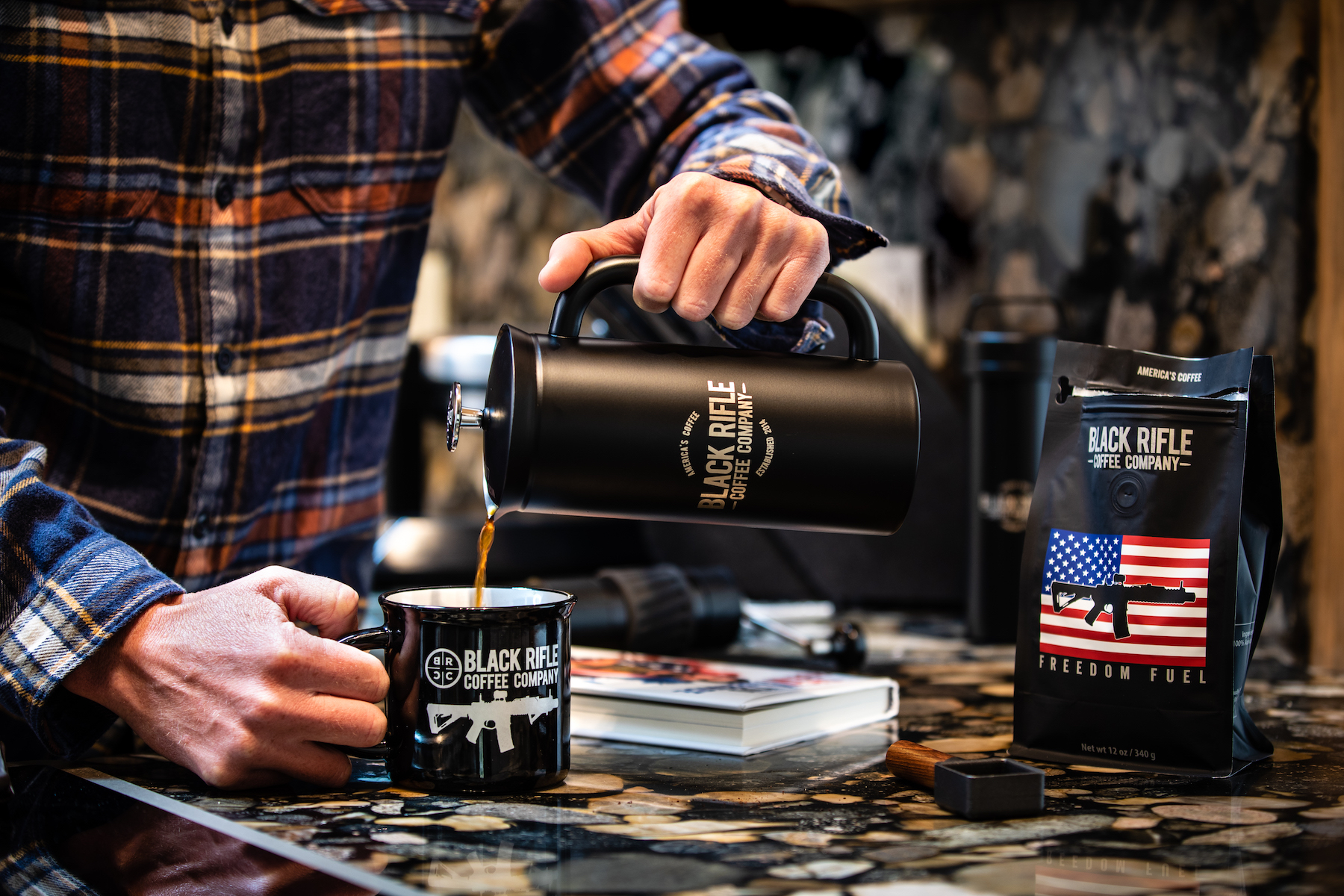 The founder and CEO of veteran-owned Black Rifle Coffee Company has received copious hate mail, social media backlash and disparaging phone calls in the wake of a New York Times’ article profiling the company, which paints itself as an organization not only serving up a basic cup of joe, but with an extra shot of patriotism delivered by military veterans.

Hafer and his colleagues hoped the article, which ran July 14, would give them the opportunity to distance Black Rifle from right-wing fringe groups and individuals who’ve adopted its merchandise as their own. The piece would be the company’s chance to denounce racism, hatred, bigotry and antisemitism from its brand once and for all, arguing that the vitriol never aligned with the firm’s mission.

Instead, pundits and trolls alike immediately took Black Rifle’s latest message to mean it was shutting out all conservative voices, something Hafer says has been unreasonably conflated.

“You can taste the bigotry,” an unidentified man says, exhaling with satisfaction after sipping from a supposed cup of Black Rifle Coffee in a fake commercial the company’s IT department stumbled upon last week. In the mock advertisement, which is seemingly intended to associate the brand more closely with the very people Hafer is publicly pushing away, the man says that the coffee gets “you in the right headspace before oppressing minorities.”

Now, the seven-year-old organization, which is “pro-constitution, pro-individuality,” is doing what it can to make sure its employees are taken care of since it expects the hostility to ramp up from angry fans and hecklers who aim to disparage or threaten Black Rifle and its patrons online and even at home.

“These aren’t our customers,” Hafer said in an interview Wednesday. “These are people that are making very illogical, irrational statements about the company that are misleading,” he said, referring to the relentless harassment and racist rhetoric he’s seen cropping up on Twitter.

“I don’t participate in the daily dialogue of what’s happening, you know, in the fringe aspects of Twitter,” he added. “I participate in real conversations with real people as I’m serving coffee at my coffee shop; those are the people I talk to, people that I can put a face to a name.”

Hafer says he’s not been one to engage in a culture war or political statements when promoting his coffee. Yet in a 2018 video, Hafer and Mat Best, the company’s vice president, team up to parody opposing political viewpoints. Dubbed “Conservative Comes Out,” which has received 3.4 million views on YouTube, Best and Hafer use extreme satire to depict a son “coming out” — not as gay, but as a supporter of the Second Amendment and other conservative causes. The depiction quickly turns into chaos when Hafer, playing the role of Best’s liberal father, and the remaining members of the progressive family become hysterical, slamming a cat to its death and pouring gasoline on one another in response to conservative viewpoints. One member even threatens to blow himself up with a suicide vest.

After years of hyping up a certain gun-toting, unruffled machismo leaning heavily on the founders’ military experience and veteran status to build its fan base — a version of the “tactical lifestyle” that’s hugely popular with paramilitary and ultranationalist groups — did Black Rifle ultimately mislead the type of clientele they serve?

Hafer said he doesn’t see it that way because, at its core, Black Rifle is about brewing good coffee and supporting veterans and first responders.

“We always do that with an eye toward inspiring, educating and entertaining, and we always take care of our community,” a company spokesperson said. “It’s what we’ve always done and will continue to do.”

“We’re a group of guys that we’ve been working overseas the majority of our adult lives; we’re veterans from the special operations community,” added Hafer, a former Green Beret and contractor for the CIA who served in Afghanistan and Iraq.

“We just looked at what we were doing as, ‘This is the type of content that we want to see. It’s funny, it’s irreverent,'” he said.

Hafer and his team don’t connect to a single stereotype, either. Hafer sees himself as the pro-vet, pro-law enforcement, pro-Second Amendment rights guy who also wears argyle socks and Birkenstocks and drives a Volvo.

“[Our message is] not meant to be like, ‘No, you can’t, drink a vanilla latte if you’re a Republican!’ That’s absurd,” Hafer said. “If you think you have to conform to these humorous, exaggerated stereotypes, because that’s how you think people actually live? Like, wow, how isolated and alone and miserable that person must be.”

He added, “We’re not engaged in the war of words. We’re more concerned with how funny our videos are — whether or not they’re making a political point.”

Not Just a Brouhaha over Brew

Despite the executive’s assertions that Black Rifle is apolitical, the company has waded into the political fray often at a time when politics and identity have become increasingly merged.

In 2017, for instance, Black Rifle touted a “Make Covfefe Great Again” T-shirt, which was a combination of then-President Donald Trump’s popular “Make America Great Again” slogan and his viral “covfefe” tweet, which looks a little like “coffee” — a presumed typo made by the president that quickly became a meme.

Though the shirt has been removed from the company’s website, the spokesperson said it wasn’t an endorsement of a political view, just a play on the meme meant to be humorous.

But then came a time when the company had to deliberately state what kind of followers wouldn’t be tolerated: extremists.

In November 2020, Black Rifle publicly disavowed any support or sponsorship of Kyle Rittenhouse, a 17-year-old Illinois resident who traveled to Kenosha, Wisconsin, where he shot and killed two people during a Black Lives Matter protest. In his post-jail photo, Rittenhouse donned a shirt with Black Rifle’s logo. “We’re not in the business of profiting from tragedy,” Hafer said in a video statement at the time.

Another instance was the Jan. 6 U.S. Capitol attack. Black Rifle’s branding made a splash when Eric Munchel, first known as one of the “zip-tie guys,” sported a company hat.

“Oh, [expletive], here we go again,” Hafer told The New York Times, describing his thinking upon seeing the photos of Munchel before he was formally identified.

In the Rittenhouse case, Hafer drew a line in the sand to distance Black Rifle from extremist views. The company kept quiet in regard to Munchel, but still got a heaping of backlash from the incident. Hafer made his position known again in the Times article, specifically calling out racists and the Proud Boys, a neo-fascist group of males who often show up to rallies, gatherings or protests to oppose liberal or progressive groups.

“The misinformation that’s being put out is that I have somehow connected those two groups with conservatives,” he told Military.com. Hafer, who is Jewish, has received antisemitic remarks too, which he’s openly condemned.

“I don’t believe conservatives are either racist or anti-Semites, I was merely stating these groups don’t have a place in my company,” Hafer said. “I don’t know how you can actually interpret that from the story even as you’re reading it, but it’s not [for] me to kind of weigh in on people’s literacy levels.”

The company spokesperson said it’s the third time that hate mail; doxxing, or publishing private and identifying information on specific people; and trolling have come to rear their ugly heads. The spokesperson asked not to be identified because of the threats that company employees are facing.

In some cases, staff members’ official photos have been pulled into Reddit chat threads or on Twitter, where trolls mock and make discriminatory remarks about their appearance or race. Other times, employees receive the same cruel email hundreds of times in their inbox.

“A lot of focus right now is support for our internal team members who’ve been sifting through this stuff,” the spokesperson said. “[That they] are taken care of, have any resources they may need.”

The organization has yet to see evidence of coordinated online attacks — but in an era of disinformation and misinformation, Black Rifle isn’t naive to groups concocting some type of scheme.

“Anything associated with any of these extremist groups, that’s just not who we are,” the spokesperson said.

Related: ‘Beijing Biden Is Not My President:’ Troops’ Social Media Posts in Spotlight After Capitol Riots

© Copyright 2021 Military.com. All rights reserved. This material may not be published, broadcast, rewritten or redistributed.