Buying an iced coffee can be hit and miss. Although it is absurdly simple on paper – coffee served over ice and stirred with milk – there are all manner of variables that can affect quality. So, perhaps it’s best you just make your own. I spoke to Stuart Wilson, the founder of Whitstable-based speciality roastery Lost Sheep Coffee and Lynsey Harley of the Fife roastery and Edinburgh cafe Modern Standard, on how to make the perfect version at home.

You have three choices here, but the foundation of each is the right sort of bean. “I would recommend a Brazilian or a Colombian,” says Wilson. “You want a nice, sweet, full-bodied coffee … preferably single origin.” This is important. Coffee blends – which is to say a mixture of coffee from different countries – are typically designed to be brewed hot. When combined with heated milk, their natural sugars are brought to the fore. If you use a blend to make iced coffee, this process doesn’t occur and the finished product might be more acidic than you expect. Wilson’s advice is to “get the purest, most fulfilling flavour in its simplest form, because then there’s less to go wrong”. Also important: don’t buy pre-ground coffee from supermarkets. The quality is poor, the grind isn’t fine enough for espresso, and it will be staler than if you buy direct from a roaster.

The easiest option: capsules
If you are in a hurry, the quickest way to make an iced coffee is to use a Nespresso (or equivalent) machine. Plenty of specialty roasters make Nespresso-compatible pods, many of which are now, thankfully, compostable.

The expensive option: espresso machine
If you are lucky enough to have an espresso machine at home, you can also get your shot of hot coffee this way. The key here is consistency. When Wilson makes an espresso, the process is exact: “We weigh out exactly 18.5 grams of freshly ground coffee, and then tamp it softly and evenly. We would then time the espresso extraction, a good starting point is 30 seconds, and weigh the espresso extraction at the end, to ensure that we have 30 grams of espresso”.

The longest option: cold brew
If neither of these are available, you can try making your own cold brew. This requires a lot more time, because cold water won’t dissolve the coffee’s solubles as much or as quickly as hot water. You may also want to choose a different type of bean for this method since, as Harley points out: “You’ll probably want light to medium roasts, as anything darker might be too bitter”.

The recipe is simple, though: take your cafetière, add 120g of coarsely ground coffee per litre of cold water, stir (but definitely do not plunge), and leave in the fridge for 24 hours. After that, you can plunge it, or feed it through a filter, then decant it into a jug or pot. This is your cold brew coffee. But remember, as Wilson says, this will be weaker than an espresso extraction, so use a double shot for the iced coffee.

Now, theoretically, you have chosen and prepared the perfect type of coffee in the perfect way, which means it should be sweet enough to drink as is. But if you do need to add sugar, do so when you are pouring the hot coffee. If you’re using a cold brew, put sugar in the glass before the coffee. If you’re using a capsule or an espresso machine, sweeten the drink before you tip it into the glass.

Good news, the hardest part is over. Wilson describes the rest of the process as simply: “Coffee in, ice over the top, milk, stir,” but let’s break that down a bit. Your shot of (hot, unless you’ve cold brewed) coffee goes in the bottom of a glass. Now it’s time to add the ice. You want to fill the glass between a third and a half with ice, to cool the coffee down. Your first few cubes will melt quickly, because of the heat of the coffee. The alternative method is to blend the ice, but this has its own pitfalls. As Harley says: “Blended drinks just change the dilution of the coffee, so blending the ice with the milk and espresso turns it more into a slushie. If people want to blend the ice, they might want to consider increasing their espresso, maybe adding another double, so that once blended it tastes more balanced. But I’m more of a cube purist. I like just to have a chilled drink, and not a blended one.”

Now you top up the glass with milk. Again, personal preference comes before anything else here, so feel free to experiment with what works for you, but Wilson thinks that “full-fat milk” gives a more full-bodied flavour. But milk alternatives will work just as well. If you’re non-dairy, Harley suggests avoiding soy milk, since “the acidity in the coffee can often split soy and that’s not ideal”. Instead, she says, “Oat milk works well cold, and it adds a really lovely biscuity flavour to the iced coffees. Coconut milk is another good substitute, and it’s a good summer flavour, too.”

Your coffee is almost ready. The final step, according to Wilson, is to stir. “I’m not talking electric whisks,” he says. “I’m talking a good four or five full stirs around the cup. What you want to do is get the coffee, the milk and the ice to combine and chill down hard, and then you get that really nice, ice coldness all the way through.” 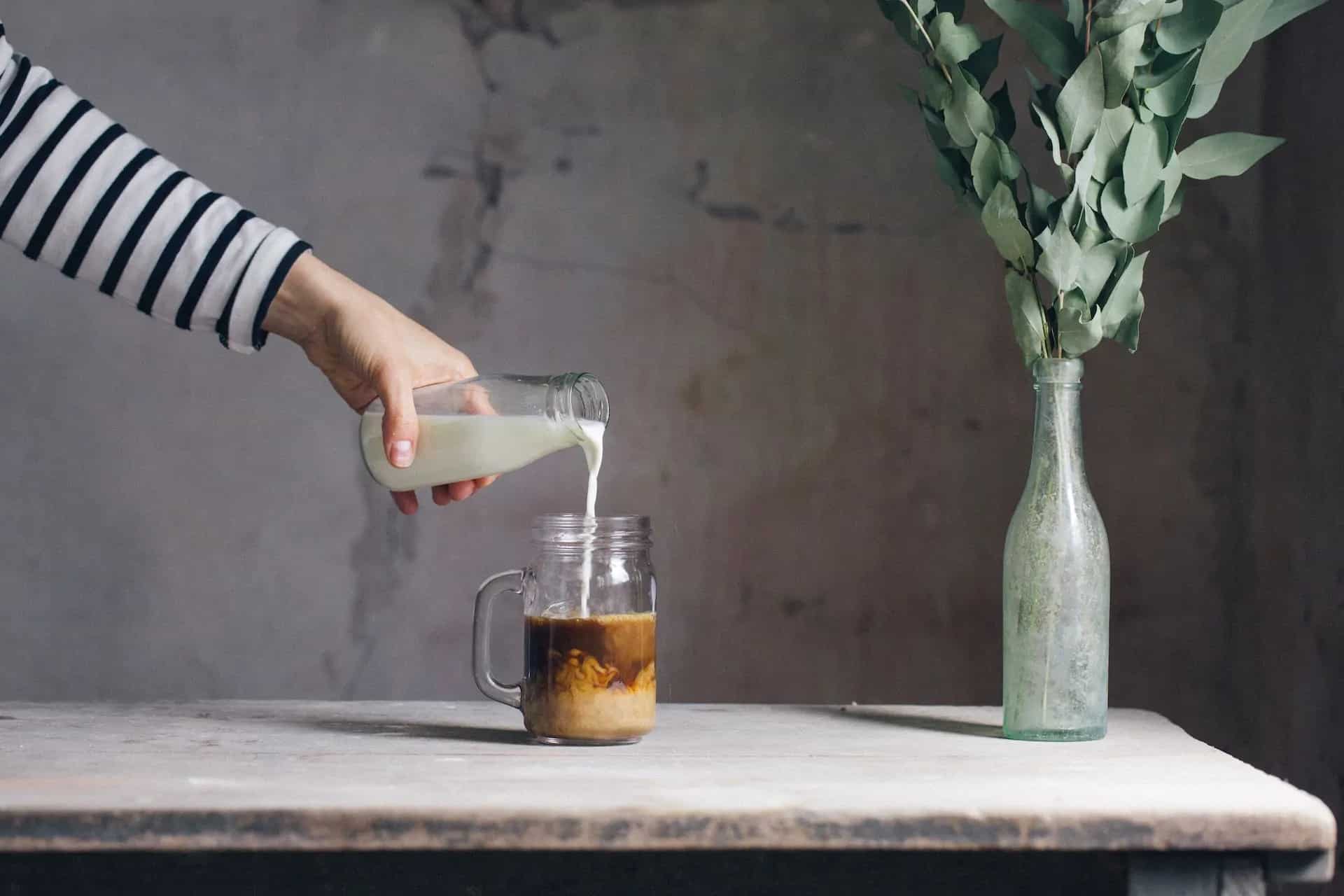