When cooking, I like to use inactive time to my advantage. These two recipes exemplify that approach perfectly: while the pork chops are absorbing their spice rub, you can shift gears and cut up the onion and radicchio that will be served alongside. Later, while the chops rest, you turn to the sauce. With the prawn dish, while the rice is simmering away, the cook has freedom to make the tomato-kimchi mixture. Every minute of the recipe is bringing you one step closer to the finishing line, because, at the end of the day, all we really want to do is to eat.

A bit of sugar mixed into the salt helps these chops brown during their relatively short cook time, and while they rest, make the wilted greens (which are actually red) in the drippings. It’s a dead-simple combination that adds up: salty, savoury, meaty, sweet and a touch bitter. If you want to scale this up to make enough for four, there are a couple ways to do it: bust out a second frying pan and cook the chops in two pans simultaneously, then go down to one when it’s time to wilt the radicchio; or wipe out the pan, add another three tablespoons of oil and cook the second batch of chops in the same pan before moving on to the greens.

Mix the salt and sugar in a small bowl. Lightly pound the pork chops with a meat mallet, rolling pin or the heel of your hand until they’re about 1cm thick. Pat dry, then season all over with the salt-sugar mixture. Let the chops sit while you prep the radicchio and onion.

Trim the radicchio and separate it into individual leaves. Cut the leaves into irregular 7½cm-10cm pieces. Thinly slice the onion crossways, then separate into rings.

Set a large, cast-iron frying pan over medium–high heat for two minutes. Pour in three tablespoons of oil (you need enough to thoroughly coat the surface, so add more if needed), then carefully slip the pork chops into the pan. Press down to ensure that the centre of each chop is making good contact with the hot oil and the pan and cook, turning every minute, for five to six minutes in all, until very well browned with some charred spots on the fattiest areas. The flesh will still be a little pink – if you like yours more well done, add a minute or two to the cooking time. Transfer to a large plate to rest.

Carefully pour off the fat from the frying pan and wipe out any burnt bits. Return the pan to medium heat and add the remaining tablespoon of oil. Add the onion, season with salt and cook, stirring occasionally, for about four minutes, until the onion rings are floppy and lightly browned. Add the radicchio in batches, tossing the leaves in the hot pan and letting them wilt before adding more, until all the radicchio is in the pan. Season with salt and cook, tossing, for three or four minutes, just until the leaves are wilted and tender but the thickest part of the rib still has a little bite to it.

Squeeze in the juice of one lemon half, toss again to combine, then tip the radicchio on to a platter and drizzle a little honey over the top. Slice the chops against the grain, lay them on the leaves and drizzle with any resting juices. Season with flaky salt and serve with the remaining lemon half and mustard for dragging the pork through.

Kimchi and butter complement each other like hot sauce and soured cream. The push-pull of spice, tang and sweet richness is the foundation of this abundantly umami-ish, saucy, bouncy and extremely easy dinner. The spicier your kimchi, the hotter the sauce will be – add a few dashes of hot sauce if you want to amp it up even more at the end.

Put the rice in a fine-mesh strainer and rinse under cold running water for about a minute, until it mostly runs clear. Drain, then put the rice and 310ml water in a small saucepan and set it over a medium–high heat. As soon as the liquid is at a simmer, turn the heat to medium–low, cover the pan and cook for about 18 minutes, until the rice is tender and the water has been absorbed.

Meanwhile, roughly chop the kimchi. Melt the butter in a medium saucepan over medium heat until it foams, then add the kimchi and any of its juices and cook, stirring occasionally, for three minutes, until the liquid is simmering. Add the tomatoes and simmer gently, stirring occasionally, for three to four minutes, until the tomatoes are starting to collapse and their skins are wrinkled. Press gently on the tomatoes with the back of a spoon so they split and release their juices, then simmer for three minutes more, until the sauce thickens.

Add the prawns to the sauce, lower the heat and cook very gently, stirring occasionally, for five minutes, until just opaque: don’t boil the prawns – cooking them slowly like this keeps them tender and juicy. Taste the sauce and season with salt if needed (between the kimchi and the naturally salty prawns, you may not need any additional seasoning).

December 3, 2022
Plant-based meat is the star of this veggie chili recipe : NPR 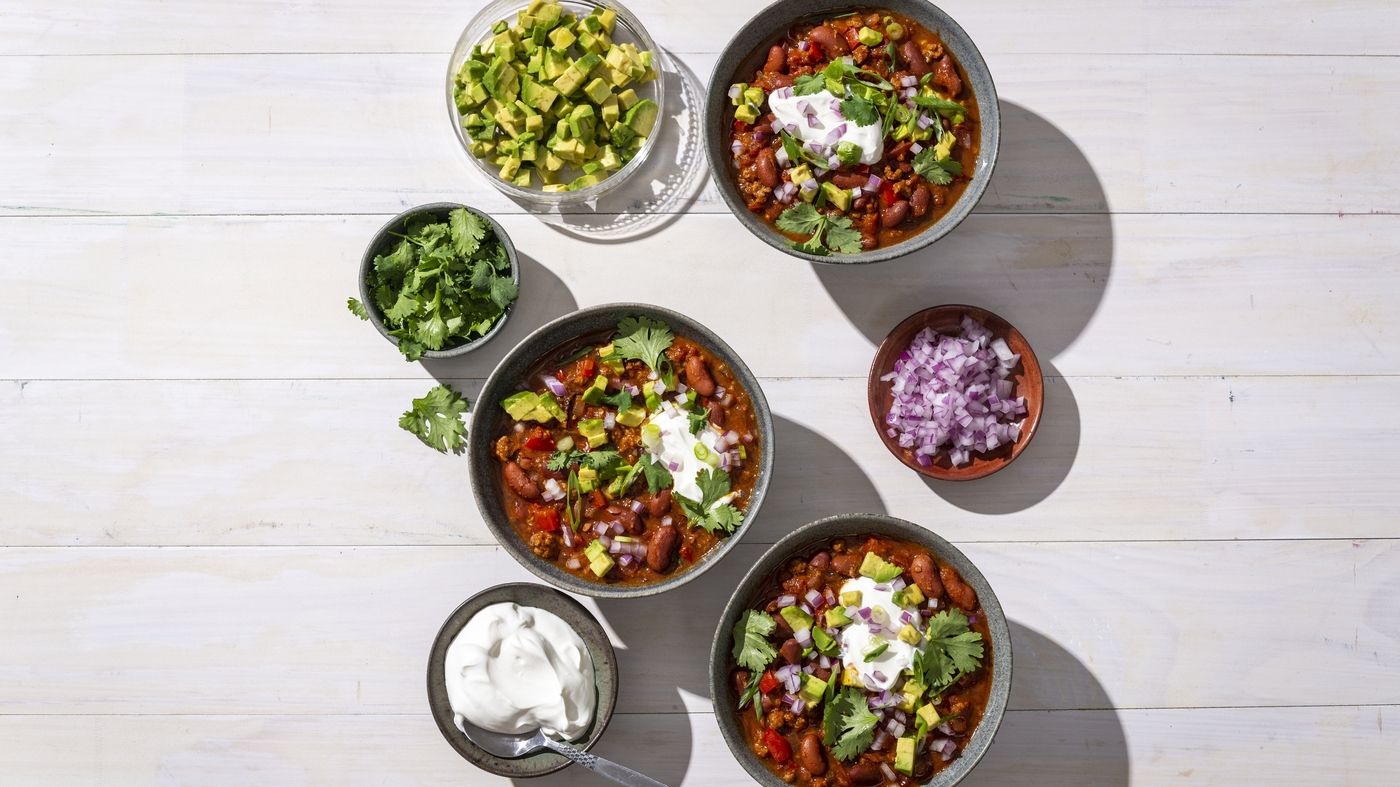 Plant-based meat is the star of this veggie chili recipe : NPR