Skip to content
I was riding on the light rail a few weeks ago on my way to Pisgat Ze’ev when I passed a stone building with a sign for Efendi, a Turkish restaurant with a large sign advertising that is kosher. When I was offered the chance to visit, I was happy to say yes.

There are several things that are a little strange about this restaurant. It is right on the main road between Jerusalem and Pisgat Ze’ev, just north of the “white statue” near the Hebrew University on Mount Scopus. To get to the restaurant I had to make a U-turn on the busy highway, but thankfully there is a small parking lot next to the restaurant.

The design of Efendi is Middle Eastern, with lots of arches, and carved stone. It would be at home in Istanbul or Cairo. But the first person to greet me was the manager, Aaron Bakshi, wearing the haredi uniform of a black kippah, black pants and a white shirt. Bakshi told me the restaurant is mehadrin, and the owners opened it because they both like Turkish food, which is hard to find in Jerusalem.

The next strange, or at least unique thing about the restaurant is that the leather-bound menus are offered in either Hebrew or Arabic, but not in English. Bakshi assured me an English version is in the works. The co-owners are longtime business partners, a Jew and an Arab.

The Arab owner, Barhoum Wazwaz from Beit Hanina, said he bought the restaurant over a year ago and took a year to renovate. It opened four months ago. 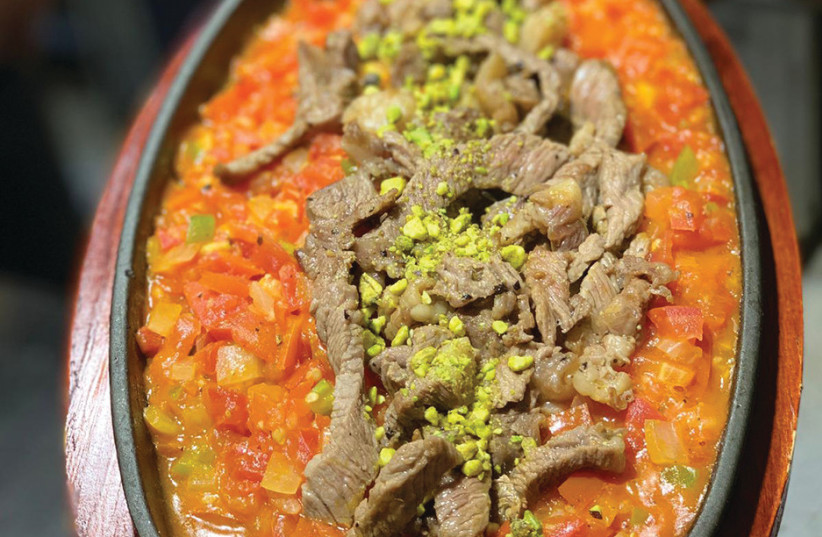 “I am in love with Turkish food, and I travel to Turkey a lot,” he said. “My partner also loves Turkish food, so we said yalla, let’s go for it.”

The menus are in Hebrew and Arabic to encourage both Jews and Arabs from nearby Beit Hanina or other neighborhoods to patronize the restaurant. The chef is Samer Ghatet, a well-known Arab chef who also judges international food competitions.

My daughter and I arrived for an early dinner, and we were the only customers. The staff seemed happy to see us, and smiled broadly when I spoke to them in Arabic. Samer suggested we try the unique Turkish dishes, although there are also steaks, grilled pargiyot and schnitzel.

The laffa bread is baked fresh in a tabun oven and came out steaming with both black and white sesame seeds. Despite intentions to cut back on carbs after the holidays, I was not able to withstand the temptation. Along with the bread was a selection of standard salads, although the matbuha stood out as especially good.

For her main course, my daughter received two long, thin kebabs on a bed of eggplant topped with tehina (NIS 80). The kebab was good but not really anything special.

My dish, however, was very special. It was called Altizimli Istanbul and was chunks of lamb in a spicy tomato sauce topped with pistachio nuts (NIS 120). While I’ve visited Turkey several times, I was not able to taste any meat dishes because of kashrut. This was a good opportunity to try authentic Turkish food.

“How spicy do you like it?” Samer called out from the kitchen in Arabic.

“I’m Ashkenazi,” I answered, and he laughed.

The dish was served piping hot, in both meanings of the word, and was delicious. The tomato sauce was enhanced with garlic, onions and hot peppers, and the lamb was perfectly cooked. It was a special dish that I would be happy to go back for.

We finished our meal with sweet mint tea.