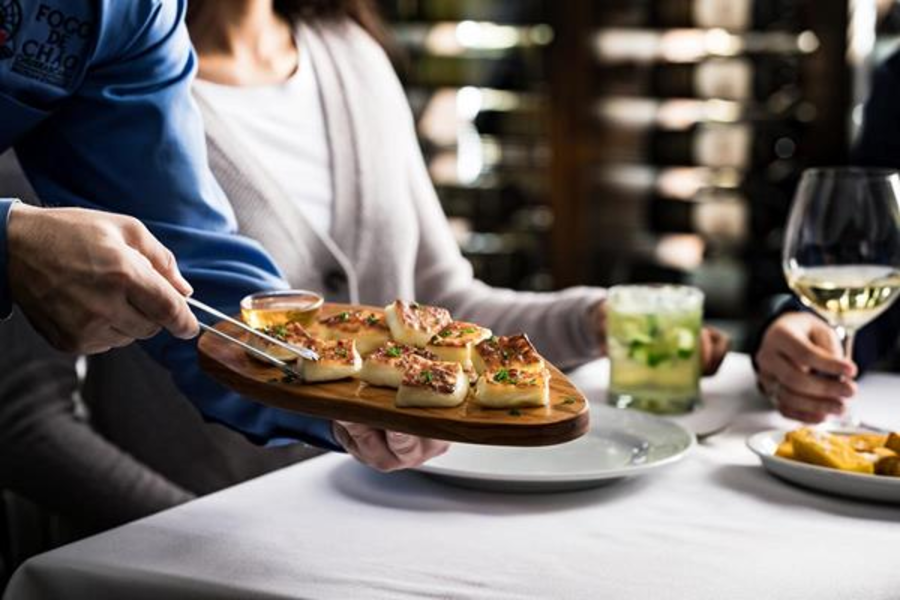 Fogo de Chão is a wonderland for carnivores. The rotating skewers of churrasco—or Brazilian-style barbecue sliced to order—have become synonymous with the chain. Each cut of meat is coated in sea salt and paraded around the room, leaving a mouthwatering aroma that fills the dining room.

Despite this, on a recent trip to a Los Angeles location of the churrascaria, I discovered that the prized meats are not the best bite to eat at Fogo. And no, I’m not here to say the signature pao de queijo, or bouncy Brazilian cheese bread, is either (although it is delicious). The best thing to order a la carte is the queijo assado—or grilled cheese.

Queijo assado is made with coalho, a squeaky cheese that’s salty and firm enough to hold up in flames, while still externally browning into a masterpiece. The one at Fogo de Chão is dressed in a malagueta-infused honey, which is both subtly spicy and florally sweet. The cheese is sourced in the U.S. and the flavor is fresh. The result is a dish that hits all the right notes: fragrant, melty, simultaneously gooey, and chewy. Each component works in tandem to create an experience unlike any other I’ve had at the Brazilian steakhouse.

“We launched [the queijo assado] during the summer of 2019. It was supposed to be just a seasonal item just to try—but it was such a success that we kept it on the menu,” explains Vanderlei Melchior, an area manager for DC and Baltimore’s Fogo de Chão locations. The queijo assado marks what feels like a shift in Fogo de Chão’s formula. The a la carte and marketplace items at Fogo always felt like a bonus. Now, however, it can be the star of the meal.

“As a company, we’ve been evolving in the last few years, trying to add more value and more options for those choosing just the market table—to have more wholesome foods,” Melchior says. Instead of eating one’s weight in cuts of beef, the option to fill up on salads, hummus, seafood, and cheese is available.

The move is strategic. Lifestyle changes are abundant, and more and more people are turning to plant-based diets or cutting back on red meat. In the 2021 Food & Health Survey conducted by the International Food Information Council, one in four adults reported consuming more plant-based proteins than they had in the previous year. Panda Express, KFC, Burger King, and White Castle have all rolled out their own versions of plant-based entrees. Eleven Madison Park made waves by revealing an entirely vegan menu. It doesn’t matter if it’s fast food or fine-dining—the options are now available.

“We really [want] to eliminate the veto vote,” Melchior begins. “If you have a group of five or six people like, ‘Where are we going to dine today?’ Maybe 10 years ago, if one person in the group had a craving for seafood or fish, we wouldn’t be an option.” According to Melchior, and the expanding menu at Fogo, that is no longer the case.

In addition to the queijo assado, the marketplace items feature seasonal ingredients, like marinated feta, a roasted beet and orange salad, and seasonally inspired hummus. There’s more seafood to choose from for pescatrians: shrimp cocktail, salmon, and chilled lobster are all on the menu. Diets that forego red meat are no longer an afterthought.

Of course, vegetarian dishes are not limited to only vegetarian diners. The queijo assado can be the crown jewel on top of a meal mostly composed of meat—a welcomed reprieve from salty beef, charred ribs, and flame-kissed chicken wings.