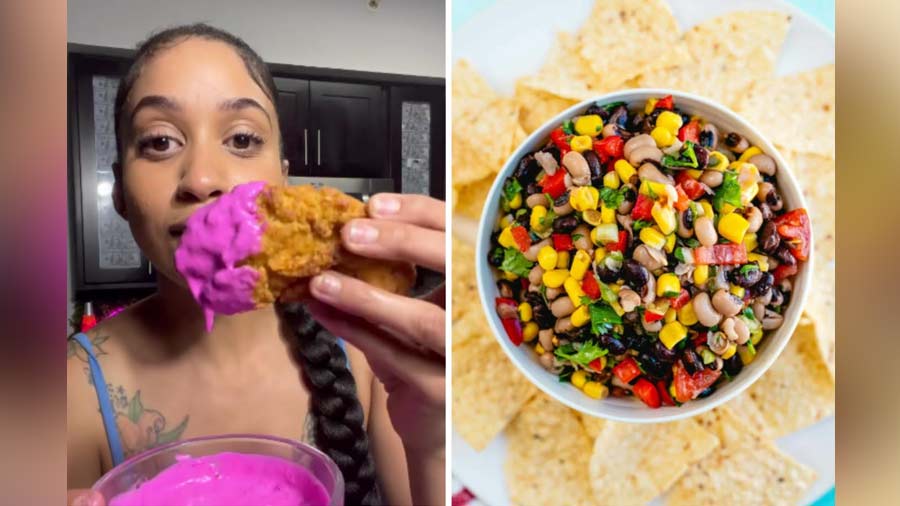 Two of the biggest (and brightest) summer food trends are in the soup. Chef Pii’s Pink Sauce which caused a frenzy across social media for its chic, millennial pink base is being called out for being potentially hazardous. Cowboy caviar has made Twitter mad because apparently, the Instagram-approved salad appropriates a popular Mexican salad.

Here’s breaking down the two debates that are taking the food world by storm at the moment.

When Veronica Shaw aka Chef Pii first dropped the Pink Sauce on her social media sometime in June, its hype spread across Instagram and Tik Tok like wildfire. The Florida chef refused to tell followers how her gorgeous dipping sauce tasted or what it was actually made of. Shaw was seen drizzling it over a number of foods, from chicken tenders and burgers to tacos and corn.

By late June, her followers had started questioning the consistency of the sauce’s colour. While it appeared a striking millennial pink in some of the videos, in other videos it seemed much paler. Chef Pii attributed the difference in hues to the different lighting in each video and also the ratio of ingredients (since it was being made in small batches by her). Soon after, she revealed that the Pink Sauce is made with dragon fruit, sunflower seed oil, honey, chilli and garlic.

Shaw started shipping out the sauce to customers in early July. While some customers complained of sloppy packaging, some buyers reported that the sauce smelled “rotten”. Shaw was quick to offer a refund to those who received damaged bottles, but this raised bigger questions.

Users noticed some substantial discrepancies on the sauce’s nutritional label, especially pertaining to serving quantities. However, their biggest concern was the shelf life of the hot-selling condiment. Given that the Pink Sauce contains milk and is only made with natural preservatives, buyers worried whether it was safe to ship unrefrigerated. Shaw insisted that the sauce should only be refrigerated upon opening.

how do i know pink sauce isn’t just pepto bismol

“The Pink Sauce has only been a product for 20 days, literally. We have been going through trial and error just like any other business,” Shaw said in an interview recently.

Most fans urged her to obtain a licence, fix the labels and correct any production-related errors before putting it out in the market.

The United States Food and Drug Administration (FDA) requires condiment manufacturers to obtain food facility registration. Needless to say, as Chef Pii’s followers pointed out, the candy-coloured sauce wasn’t FDA-approved. “What do you mean FDA-approved? I don’t sell medical products. The Pink Sauce is not a medical product. The Pink Sauce doesn’t contribute to your health. I’ve never said that. Did I?” she said during a live stream.

Pink sauce lady who doesn’t know what the F in FDA stands for https://t.co/3stXxnrT3s

The ‘F’ in FDA stands for food and her followers were justifiably left confused over her comments. Twitter as a whole has been quite captivated by the drama over Pink Sauce.

I’m absolutely obsessed with the Pink Sauce lore.. I just can’t believe it

If you see every other YouTube chef whipping up cowboy caviar on their channels, that’s because the salad is the ultimate summer food. Also known as Texas caviar, this corn and bean salsa originated in the 1940s in Dallas and can be used as a dressing and an appetiser. A woman named Helen Corbitt — who hailed from New York originally — first served the dish at a Houston country club. But the salad got its name when she served it again at the Driskill Hotel in Austin. Corbitt’s original recipe was made using black-eyed peas, onions, and garlic packed in oil and vinegar and served cold, and noticeably did not include corn and beans.

The cold salad was cheekily named ‘caviar’ (owing to the similarity between caviar and the salad’s main ingredient, the black-eyed peas). When Instagram food enthusiast Bria Lemirande made the cowboy caviar a few weeks ago the recipe went viral. Followers raved about the addition of bell peppers, red onion, beans, corn and feta cheese into the mix.

Cultural appropriation claims soon followed as Twitter termed it a “pico de gallo but colonised”. Many also deemed the trend as a gentrified Mexican corn salsa.

Getting on tiktok is starting to make me angry. “Spa Water” is and always will be Agua Fresca. “Cowboy caviar” is just Pico de Gallo with corn and black beans. Influencers are doing too much. Y’all need to take several seats.

This is not the first time viral food trends have borrowed elements from Latinx culture and rebranded them. One of the most relevant examples would be the recent spa water trend, which is essentially agua fresca — a popular Mexican beverage made with watermelon, cantaloupe and strawberries by blending them with water, sugar and lime juice.

“Spa water”, “cowboy caviar,” all of these are foods that were taken from non-european cultures, stripped of their context & repackaged as original (white) creations.

This is how colonization happens. When native foods/concepts are rebranded for white consumption & profit.

Twitter obviously has much to say about appropriated cowboy caviar.