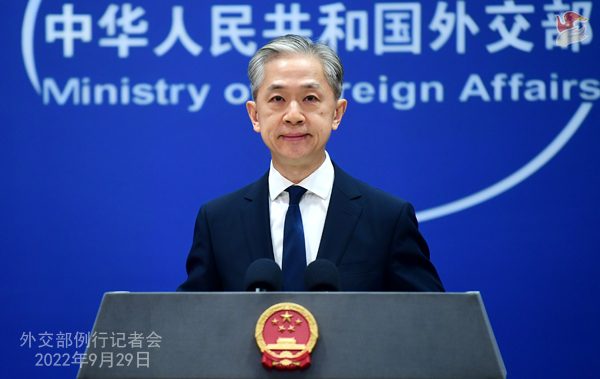 AFP: According to Pakistani police, a Chinese national was shot dead in Karachi. Could you offer any information of the suspect? Does he have any connection with Baloch separatists?

Wang Wenbin: We express condolences for the victim and sympathies to the injured. To my knowledge, the victim you mentioned was not a Chinese citizen.

CCTV: Today is the International Day of Awareness of Food Loss and Waste designated by the UN. Can you talk about China’s measures, achievements and contribution in reducing food waste?

Wang Wenbin: To quote an ancient Chinese adage, “Among governing priorities, food comes first.” Ensuring food supply has always been the top governing priority in China. For the Chinese government, reducing food loss and waste is an important pathway towards food security. President Xi Jinping personally advocated the “Clean Plate” campaign to foster strong social awareness of cherishing food and ending waste. China has enhanced regulatory and institutional functions, including adopting the Law on Food Waste, to provide rules for consumers and the catering industry. China has upgraded the infrastructure and equipment for grain production, built more than 60 million hectares of high-quality, well-equipped farmland with high and stable yield, and reduced the mechanical loss of grain harvest by optimizing agricultural machinery and equipment, which enabled China to reduce the waste of wheat harvested in summer this year by 1.25 billion kilograms. China has promoted advanced and applicable technologies including pest control, green storage and moderate processing of bulk grain and oil. The grain loss rate from diseases and pests is kept under five percent. China has actively engaged in international cooperation in reducing food loss and waste. We held the International Conference on Food Loss and Waste in September last year, which was attended by more than 50 countries and international organizations. The Jinan Initiative of the International Food Loss Conference was issued as part of the effort to build international consensus on this front. China listed food security as one of the eight priority areas of cooperation in the Global Development Initiative it proposed, and is working with all parties to proceed with relevant practical cooperation and measures. China has also put forward an initiative on international food security cooperation during the G20 meeting, offering China’s solution for the global food security challenge.

Food conservation and food loss reduction is a common task of the international community that requires joint efforts of all countries. According to the latest statistics of the World Food Program, 345 million people are facing acute food insecurity in 82 countries. UN Secretary-General António Guterres warned that 1.6 billion people cannot be sure of getting enough to eat and nearly 250 million are on the brink of famine. Under the impact of COVID-19, climate change and geopolitical conflicts, the world is undergoing mounting pressure of food shortage and low-income countries are struggling with hunger.

The way food waste is dealt with in some developed countries, however, has been regrettable. Their per capita food waste ranks among the top in the world, mainly caused by consumption patterns. The waste of resources and environmental pollution in these countries as a result of overproduction is even more shocking. Take the US as an example. Each year, US food overproduction consumes 140 million acres of agricultural land, 22 billion tonnes of blue water, 350 million kilograms of pesticides, and 6,350 million kilograms of fertilizer, amounting to a staggering waste of resources.

China is ready to share experience with all parties, actively advance the Global Development Initiative, engage in international cooperation on reducing food loss and waste and jointly uphold global food security. We once again urge developed countries to fulfill their international obligations. We can all contribute to the 2030 Agenda for Sustainable Development and the goals of Zero Hunger and No Poverty by minimizing food loss and waste. 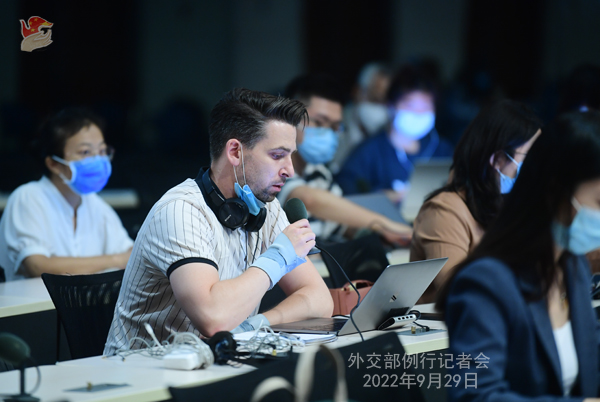 People’s Daily: We have noted that the BRICS cooperation mechanism held a series of meetings in September, including meetings of tourism ministers and energy ministers. Can you share more information?

Wang Wenbin: China is the BRICS chair for 2022. Since the beginning of this year, China has fulfilled its duty as the BRICS chair in real earnest and made every effort to advance BRICS cooperation across the board. We have so far successfully held nearly 130 meetings and events. In September alone, we held a number of ministerial meetings, including the meetings of tourism ministers, energy ministers and disaster management ministers.

In the rest of the year, China will host more than 30 BRICS meetings and events. We are ready to work with other BRICS members to implement the outcomes and consensus reached at the 14th BRICS Summit in June, make unremitting efforts to deepen solidarity and cooperation among emerging markets and developing countries, and bring more stability and positive energy to world peace and development.

Xinhua News Agency: Tensions between Palestine and Israel have risen with recurring clashes in East Jerusalem, especially around the al-Aqsa mosque. Do you have any comment?

Wang Wenbin: China is deeply concerned about the heightened tensions in Jerusalem. We oppose any action to unilaterally alter the historical status quo of Jerusalem and call on relevant parties, notably Israel, to stay calm and exercise restraint in order to prevent the situation from getting out of control.

The root cause of the recurrence of Palestine-Israel conflict lies in the long absence of the implementation of the two-state solution. The international community needs to act with a stronger sense of urgency and facilitate the early resumption of peace talks between Palestine and Israel on the basis of the two-state solution so that peace could prevail as early as possible between the two sides.

Yonhap News Agency: Today marks the 50th anniversary of the normalization of relations between China and Japan. What’s your comment?

Wang Wenbin: Today marks the 50th anniversary of the normalization of China-Japan relations. President Xi Jinping and Premier Li Keqiang have both exchanged congratulatory messages with Japanese Prime Minister Fumio Kishida. Leaders of both countries commented positively on the major historic significance of the normalization of ties and the achievements of bilateral ties over the past 50 years, and envisioned the way forward for China-Japan ties.

The 50th anniversary is an important milestone in the course of China-Japan relations. Half a century ago, with extraordinary strategic vision and political courage, the then Chinese and Japanese leaders made the political decision of normalizing ties and opened a new chapter in bilateral relations. Over the past five decades, the two sides have concluded four political documents and reached a series of important common understandings, laying the political and legal foundation for bilateral relations. Exchange and cooperation in various sectors have come a long way, which not only delivered important benefits to both peoples, but also contributed to regional and global peace, stability, development and prosperity.

Our world is going through major changes unseen in a century. As bilateral relations embark on the next 50-year journey, both sides need to follow the guidance of the important common understandings between our leaders, adhere to the principles established in the four political documents, renew the original aspiration behind the normalization of ties, stay committed to peace and friendship, expand mutually-beneficial cooperation, manage differences well, and work together to build a China-Japan relationship that meets the call of the new era. 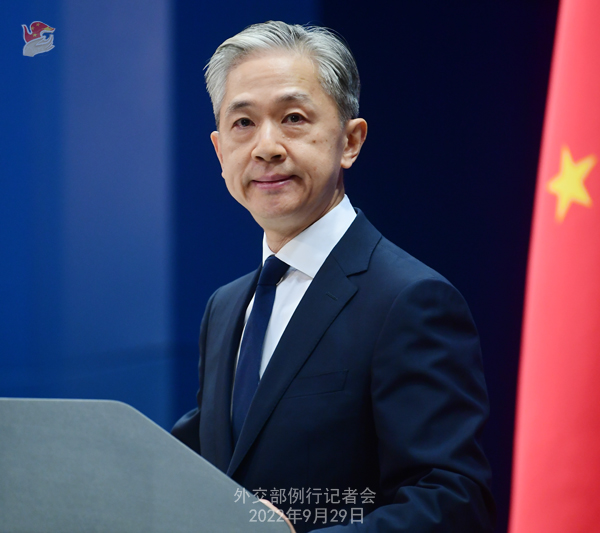