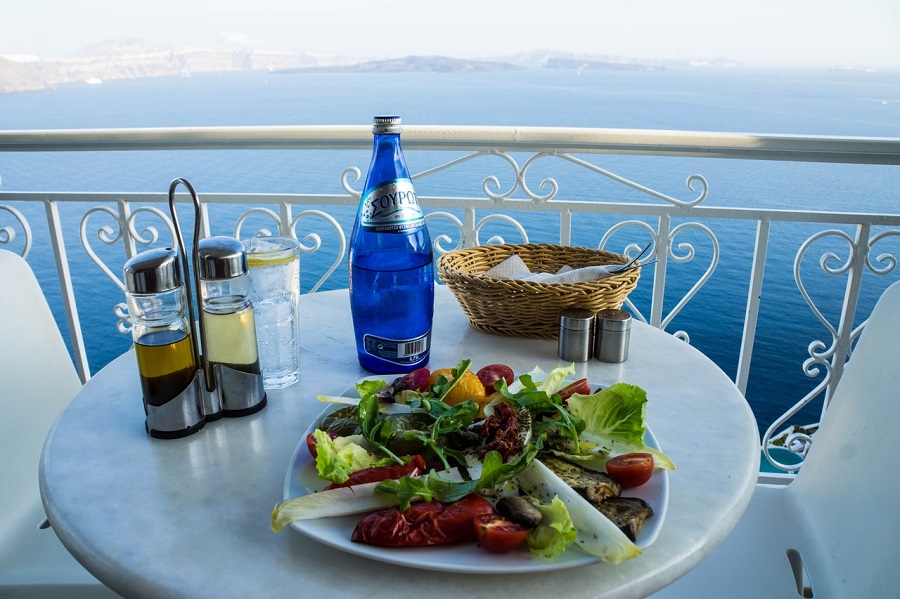 Greece offers vegetarians a large variety of highly nutritional, tasty dishes to choose from. Using fresh ingredients, prepared with age-old recipes, Greek cuisine is full of delightful surprises for which your taste buds will be thankful.

Greek cuisine is based on fresh seasonal vegetables and fruit, grains, legumes, and greens—the perfect combination for vegetarians and vegans.

Across Greece, you will find a large variety of wholesome and flavorful but meat-free dishes for your palate to savor. It goes to show that Greek food is not just souvlaki, moussakas, or a lamb being roasted on a spit.

Vegetarianism as a practice, the idea of nonviolence to animals, has its roots in ancient Greece as well as ancient Indian civilizations. Ancient Greek historian Plutarch could be considered the first outspoken vegetarian in the West, as he believed that it was “immoral” to eat animal flesh.

In his book Morals, Plutarch has a chapter on meat-eating in which he writes that since man has access to so many fresh fruits, vegetables, and nuts, the fact that he is forcing himself to eat bloody animal flesh while “trying to cover the taste of blood with thousands of spices” is inconceivable.

Appetizers, salads, and dips for vegetarians

Choriatiki is a very popular Greek salad which is made with freshly cut thick wedges of tomatoes, cucumber and onion slices, feta cheese, delicious olives, virgin olive oil, and flavorful, crushed, dried oregano leaves; it’s the perfect starter that will whet your appetite for the main course.

Dakos salad is a Cretan salad, which contains a piece of round water-dampened barley rusk topped with chopped fresh tomatoes, crumbled feta or myzithra cheese, olive slices, capers and a sprinkle of dried oregano (Useful tip: Allow the juices to soak the rusk for a few minutes, then taste).

It is highly recommended that one try the following tempting mezedes (appetizers or side dishes): fried or grilled vegetables or cheese, including such delicacies as fried tomato balls, green vegetable patties, and saganaki cheese (fried feta or hard yellow cheese). Sliced zucchini can be boiled or fried.  Zucchini is also used to make delicious patties (mixed with herbs and/or cheese). The sweet-tasting fried slices of eggplant and the rice and herb—stuffed zucchini blossoms are two must-try dishes, mostly served in the summer and autumn.

Accompany your vegetarian appetisers with some great-tasting dips:

Main courses in Greece for vegetarians

Pulses are cooked in hot nourishing soups in the winter; they are also great in salads mixed with herbs and vegetables in the summer.

Northern Greece yields top quality pulses, as the soil is rich in potassium, an element that makes them more flavorful and contributes to shorter boiling times. These include: beans from Lake Prespes area; lentils from Voio, Kozani; yellow split peas from Feneos, Korinthia and from Santorini; lentils from Eglouvi, Lefkada; and chickpeas from Larisa or Grevena. These are all well-known, top quality produce on account of each area’s favorable microclimate.

Olive oil has always been a product precious to Greeks, one that has been considered sacred since ancient times.

Ladera dishes are colorful and flavorful. Vegetables are cooked either fresh or dried in the pot at low to medium temperatures, so as to best retain their shape and flavor.

Below are some tasty Greek vegetarian dishes for you to try.

Pies hold a special place in the country’s cuisine, as they are among the oldest, simplest, and most delicious dishes one can find in Greece.

There are so many variations of ”pites,” as they are known in Greek, that it may be nearly impossible to determine precisely how many different kinds of Greek pies there are out there.

Pies are very popular among Greeks, and they come in all sorts of variations: savory, sweet, dressed with phyllo sheet or flaky pastry (called ‘sfoliata’), round, triangular or coil-shaped with either few ingredients or more elaborate ones.

Age-old household management rules point towards the optimum use of seasonal produce, resulting in a large variety of tasty creations. Pies can be served as a main or side dish or as a healthy and tasty snack during the day.

Pie filling variations depend only on the maker’s imagination and the local bounty of nature. Practically everything can be included in a pie: cheese, greens, pasta, rice, trachanas, and vegetables, among other things. Greek ingenuity has led to a large number of pie creations: cheese pie, spinach pie, leek pie, nettle pie, mushroom pie, onion pie, cabbage pie, potato pie, pasta pie, pumpkin pie, and many more.

You can find Greek pasta in many a shape and size; some types contain milk and eggs. They can be a simple yet very tasty mixture of durum wheat or semolina, water, and salt.

The pasta-making tradition is kept alive mostly by women living in the countryside (who usually prepare the pasta and allow it to dry out in the sun during the summer). They also participate in regional cooperatives, producing and selling a large variety of artisan pasta.

Such regional co-ops exist all over Greece on the mainland and islands alike. In these co-ops, you will find popular Greek pasta such as: