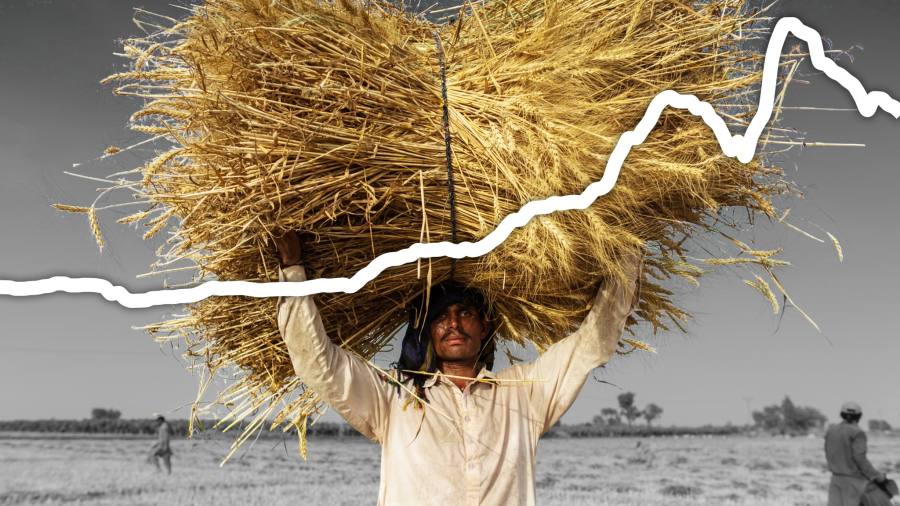 Has the high price of food passed a peak? Even before the UN-brokered grain deal between Kyiv and Moscow gave the green light last week for shipments to leave Ukraine’s Black Sea ports, food commodity prices had been plummeting. Fears of recession, a bumper harvest in Russia and hopes of revived grain trade flows have pushed prices lower.

But the price declines do not mean the food crisis is over. Analysts say the underlying factors that drove markets higher are unchanged. The ongoing war is only one of a multitude of problems that could sustain higher hunger rates for many years to come.

The Ukraine conflict came at a time when food prices were already being pushed upwards by a range of factors — mainly droughts affecting key crop-producing countries and supply chains dealing with the residual effects of the pandemic. In poorer countries whose economies have been left in tatters by Covid-19 lockdowns, the war only exacerbated a grim situation.

“What sets this global food crisis apart from previous similar situations is that there are multiple major causes behind it,” says Cary Fowler, US special envoy for food security.

The true impact of this combination of factors will only become apparent next year, analysts say. “I’m more worried about 2023 than 2022,” says one.

Storm clouds on the horizon

The war has undoubtedly been a big drag on global food production. With Ukraine’s ports blockaded and capacity on alternative routes limited, export volumes are significantly down. In June, the country exported just under 1mn tonnes of wheat, corn and barley — 40 per cent lower than the same month in 2021, according to Ukraine’s agriculture ministry.

Ukraine’s harvest started this month and growers are scrambling for storage for the new crop. But if farmers cannot sell their grains, it will have a knock-on effect into 2023 because they will not have funds to pay for seeds and fertiliser for the next season. They may not even have a crop, warns an international food policy official.

The high commodity prices seen in late spring may have incentivised greater production elsewhere. But that will be offset by the surge in input costs for many farmers, especially fertilisers and diesel used for transportation and farm equipment.

Food policy officials warn that soaring energy prices, which are expected to rise further over the winter, have also hit production of nitrogen fertiliser, a key crop nutrient.

“If we don’t sort out [the issue with] agricultural inputs — in particular fertilisers — then the crisis of affordability will turn into a crisis of availability come next year,” warns Arif Husain, chief economist at the UN World Food Programme.

So far, the main concern about food has been grain supplies, especially the wheat and vegetable oils of which Ukraine is a large exporter. But some analysts are concerned about the price of rice, the cornerstone of diets across Asia.

For now, there are high levels of inventories in leading producing countries such as India, Thailand and Vietnam. However, there are worries about export restrictions, if the high cost of wheat prompts more consumers to turn to rice as a substitute.

Only about 10 per cent of total global production of the grain is exported, so a restriction by any one exporter can have an outsized impact on international prices.

In 2007-08 export restrictions imposed by India and Vietnam, combined with panic buying by large rice importers such as the Philippines, led to prices more than doubling.

“We are monitoring rice prices closely,” say analysts at Nomura, the Japanese investment bank. “If rising wheat prices lead to substitution towards rice, this could lower existing stocks, trigger restrictions by key producers and lead to higher rice prices over time.”

Long before Russia invaded Ukraine, food insecurity was at record levels. Due to the pandemic, droughts and other regional conflicts, just under 770mn went hungry in 2021 — the highest number since 2006, according to the UN Food and Agriculture Organization.

The FAO predicts the war in Ukraine will increase the number of undernourished people by up to 13mn this year and another 17mn in 2023. According to the World Bank, for every 1 percentage point increase in food prices, an additional 10mn people are expected to fall into extreme poverty.

Across much of Africa, the Middle East and central Asia, consumption of staples outweighs production. It is countries in these regions that are most exposed to global price rises, according to commodity data group Gro Intelligence. Many emerging economies are facing the additional burden of a decline in their currencies on top of rising food prices.

The impact on countries in the Middle East and Africa that depend on imports from Ukraine and Russia has been stark. Egypt has turned to the IMF for aid, inflation in Turkey has surged to almost 80 per cent while the World Bank has described the crisis in Lebanon as one of the most severe of the past 100 years.

Even countries that do not buy from Russia or Ukraine but are high net importers of agricultural commodities are facing higher import costs. The prices of staple foods such as bread, pasta and cooking oils have been rising fastest. A loaf of bread in Bulgaria cost almost 50 per cent more in June than it did a year earlier. Cooking oils in Spain are almost twice as expensive now as they were a year ago and sugar prices in Poland have risen 40 per cent.

In lower-income countries where food makes up a large portion of consumer spending, cutting back to compensate for rising costs of living is much harder. In Egypt, where food and non-alcoholic drinks account for more than a third of household spending, people are facing food price rises of 24 per cent. In Ethiopia, where the budget on food is even higher, food inflation is 38 per cent.

“If you live in a country where, on a good day, you spend upwards of 50 to 60 per cent of your disposable income on food, there’s not much space left after that to deal with a shock of this magnitude,” says Husain.

In Africa especially “there is a risk of famine next year”, says Gilbert Houngbo, president of the UN International Fund for Agricultural Development. This in turn “could create social unrest and mass economic migration”, he adds.

Food price spikes in 2007-08 and 2010-11 each resulted in riots around the world, and sky-high food prices were a key factor in the unrest that recently gripped Sri Lanka. Other worst-affected governments have so far managed to keep a lid on social unrest by using subsidies.

“That’s provided a Band-Aid,” says Michael Pond, analyst at Barclays, “but at some point, the pressure might be so strong that governments can’t provide that Band-Aid. And that’s where things could boil over.”

No return to normal

Not everyone thinks the crisis will become more severe. Earlier this month, Morgan Stanley issued an optimistic report on the future of food prices, suggesting increases in 2023 will be lower than expected. Increased grain production by farmers, including in Ukraine as tensions ease, will temper food inflation, the report said.

Yet while some international traders are hopeful that the reopening of the Black Sea trading route for Ukrainian grains could signal the start of a “de facto ceasefire”, there is still uncertainty over Russia’s intentions. It is continuing to attack areas around Ukrainian ports.

And even if the war ended tomorrow, Ukraine’s agricultural and port infrastructure need to be rebuilt and the waters off its coastline demined. The country’s farmers may not be able or willing to come back to work on their land.

Many western government officials and analysts expect the current food crisis to last years, with the war coming on top of climate change, the pandemic and other conflicts around the world. “Any one of these factors that have pushed food inflation [higher] could continue,” says Pond.

Diversifying import sources among countries that were reliant on Ukraine for grains and vegetable oils means that prices will remain elevated for longer, and the story will be similar in energy, says Laura Wellesley, senior research fellow at Chatham House. “The overall picture looks like one of tightening supply and high prices, without any likelihood of let-up any time soon.”

Consumers may need to get used to permanently higher food prices, economists warn. Capital Economics forecasts that market levels will “remain at historically high prices” due to the increased volatility in the weather. “It’s undeniable that we’re seeing lower yields and harvests” over the past few years due to the growing impact of climate change, says Caroline Bain, chief commodities economist at the research firm.

Some analysts wonder whether the conflict has started a process of dismantling a trade system designed to deliver low-cost goods, including food commodities, to all corners of the globe.

Wellesley says that the global food trading system that allowed countries to access all kinds of foods is not set to return to normal any time soon. “That in turn likely means continued high food and fertiliser prices and a reconfiguration of trade dependencies, perhaps with a greater focus on more regional supply chains.”