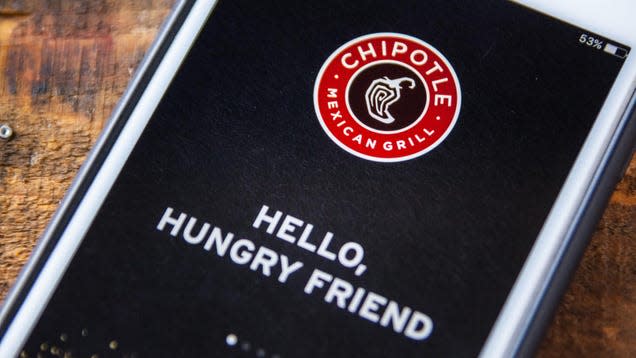 TikTok is, once again, ruining everything. Sometimes people ask in the comments why we cover TikTok so much—well, dear reader, here’s your proof that what happens on that app can create real and sometimes devastating changes to the way we go about our daily lives. Next time you try to order tacos from the Chipotle app and can’t, blame TikTok.

We’re no strangers to the Chipotle hacks—back in April, staff writer Dennis Lee tried to get a burrito for just $2 as someone on TikTok claimed to have done. Not only did it not work (Lee was charged $8.60), it wasn’t even tasty. The trouble, it seems, is that when ordering in person, the human behind the register can see through your scheme and detect your true motivations. Either that or they just assume that you want a full-sized burrito and will charge you for such.

Most recently, TikTok users like @jonserranoo have been trying a new hack that involves ordering a taco specifically through the mobile app. Our buddy Jon orders a single taco and orders a side of rice, a side of beans, a side of fajita veggies, a side of salsa, a side of guac (which costs only $1 with a taco), and a side of tortilla, which in this video appears to be the size of a burrito wrapper. The total ends up being around $4.50, about half the cost of a typical Chipotle burrito. Seems like a pretty good deal.

Chipotle quickly caught on to the scheme, according to Insider, and on September 7 sent around an email to managers saying that taco orders will be disabled from the app until further notice. Customers can still order tacos in person, but the chances of getting away with the hack are much lower when the customer and employee must look each other in the eye during the transaction.

How social media is changing the way we order food

Of course, the biggest incentive for Chipotle to crack down on this hack is because it costs the company money. But these “hacked” orders create other issues, too. Their elaborate nature, designed to exploit various loopholes in the ordering process, can also create a holdup on other orders.

It’s for this reason that so many Starbucks baristas are speaking out against social media accounts sharing ultra-complicated drink orders to create designer coffees with names like “Gringotts Dragon Frappuccino” and “Triple Threat Latte.” When a barista has to put time into these over-the-top drinks, it takes attention away from every other customer and doesn’t always leave the baristas in the best mood—trust me, you don’t want an irked barista making your coffee.

Apps are also a matter of accessibility. Folks who have difficulty hearing or speaking, for instance, rely on that kind of technology to place their food orders without a communication barrier. When a TikTok hack leads to the removal of this ordering option, it’s more than just a slight annoyance to a large population of customers.

Hacks have become such a part of the culture that some fast food restaurants, like McDonald’s, have even released their own “hacked” menus. But whether it’s coming from TikTok or the restaurant itself, what these hacks are missing is what the restaurant is actually good at. There’s a reason McDonald’s is still selling the Big Mac decades after it was introduced to the menu—it’s good exactly the way it is. These major corporations go through countless rounds of testing to determine what we, the consumers, will enjoy the most. Why don’t we just forget about social media clout, trust the process, and leave the hacks behind?