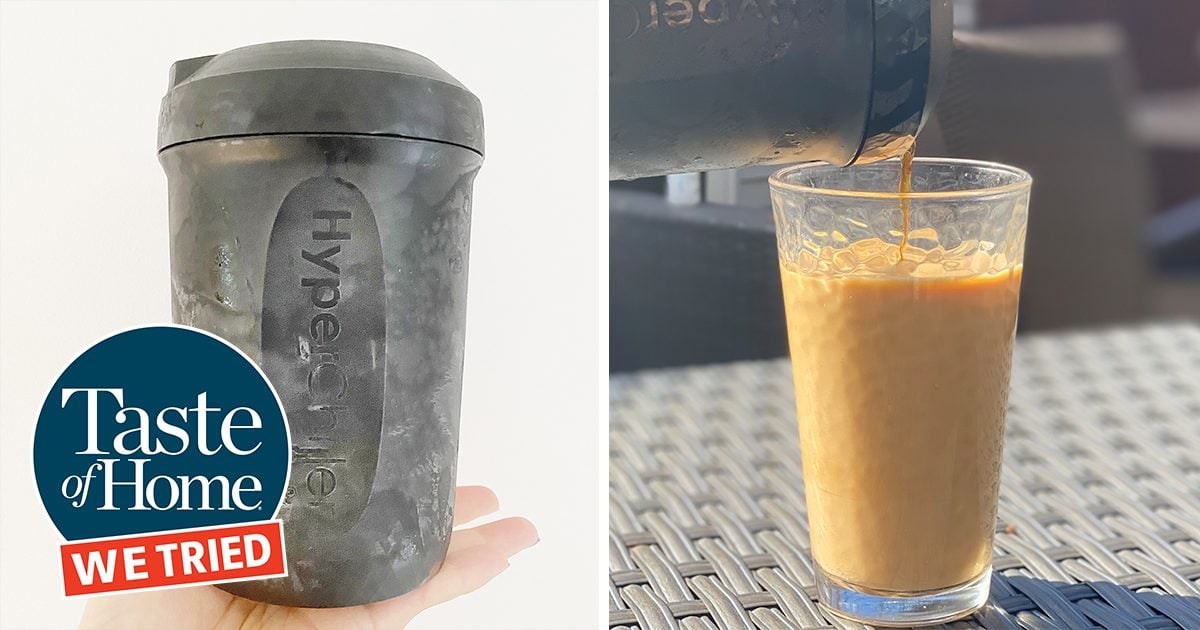 The HyperChiller promises to chill coffee, wine, tea and other drinks in one minute or less—so we tried it.

I look forward to iced coffee weather each year, but the idea of a watered-down drink from the inevitable melting ice cube has historically been a roadblock to my caffeinated satisfaction. That is, until now.

In my never-ending pursuit of the best coffee products and gadgets, I found the HyperChiller. It’s an ice cube-free way to instantly turn even the hottest coffee into a chilly summer sip—and it’s brilliant. Plus, it works on every type of drink you want to chill. I tried it on tea, cocktails and even an heirloom gazpacho soup recipe.

The HyperChiller will chill your coffee in 60 seconds or less. It’s a cordless, chemical-free wonder that uses the simplicity of regular ice in a new format to almost instantly chill even the hottest fresh brews. The patented design has made it a popular Amazon kitchen prep product that has earned an impressive 13,000 reviews (and counting).

It works by pouring coffee of any temperature into a pre-frozen chamber that surrounds every drop with Arctic-cold temperatures. You can use it with most drip machines, coffeemakers with grinders built-in, and the best single serve coffee makers. (It can even be used in a pinch to chill wine!) Plus, it’s affordable and makes a brilliant addition to any on-the-go meal or picnic that may benefit from a cool beverage without the worry of ice cubes diluting oh-so-important flavors.

How We Tested It

While I’m not entirely proud of drinking two to three cups of coffee each day, that is the reality and I heartily switch to iced coffee and cold brew styles when the weather gets a bit warm. Iced coffee recipes are just fun to sip, aren’t they? I figured I’d give the HyperChiller a shot just the way the brand suggests, by freezing its inner chamber and then brewing the coffee right into it (I placed it under my NutriBullet Brew Choice K-cup). Good news: laziness totally wins this round of delicious coffee!

Seriously, all I had to do was fill the HyperChiller with a little water, screw the cap back on and pop it in the freezer overnight. By the time I woke up in the morning all I had to do was take the frozen capsule and place it beneath the brewer where I normally put my travel mug. That’s basically it! I just let the K-cup brew directly into the Hyperchiller and waited for a full minute. Then I poured the magically very cold coffee into my oversized glass with a splash of my favorite coffee creamer, stuck a straw in it and carried on with life.

It almost seemed wrong that it was THAT easy, so I repeated the process several more times over the next few days almost hoping to find a fault with this thing. It just continued to impress me, though. I also tried it on iced herbal teas, a couple of fun weekend cocktails and my grandmother’s gazpacho recipe that started with room-temperature tomatoes.

If you’re not convinced by the 13,000+ Amazon reviews and impressive ratings, you’ll love that the HyperChiller is a cordless wonder that requires nothing more than a little water and some time in the freezer. It’s also an affordable item that makes a thoughtful summer hostess gift or practical graduation gift for iced coffee lovers.

What We Liked About the Hyperchiller:

What to Consider About the Hyperchiller:

How tall is the HyperChiller?

The product is 6.75-inches tall, so it easily fits below the drip spouts of most coffee makers with ease. The only exception is the Keurig Mini, which is simply too short to fit the HyperChiller. In that case, you can brew it into a typical coffee mug and pour it into your HyperChiller.

How much liquid can the HyperChiller hold?

It can hold 12.5 ounces at a time. That’s enough for a large iced coffee drink or two oversized white wine pours.

How do you clean the HyperChiller?

All the parts are dishwasher-safe. You can also clean them by hand with soapy water and a sponge.

What Other Reviewers Had to Say

“My son loves cold coffee but doesn’t like the process or taste of trying to cool it the traditional way,” shares Monica, a verified Amazon purchaser. “Instead, he would go buy a cold coffee, so when I saw this I got it for him as a gift. He called me the other day just to tell me how much he loves this chiller. He says it works perfectly to give him instantly cold coffee. All he has to do is pour his fresh-brewed coffee into the chiller, and it is immediately turned into ready-to-drink cold coffee. He told me I really scored with this gift.”

Another verified Amazon purchaser raves about how much better the HyperChiller makes iced tea. “This product works exactly as described to chill whatever beverage you want without diluting it by pouring over ice. I love iced tea, but one of my biggest beefs is either having to chill it by diluting it or waiting it out in the fridge for hours. I’m the only iced tea drinker in my family so making an entire pitcher doesn’t make sense when I only want a glass occasionally. With the Hyperchiller V2, the problem is happily solved. It lives in my freezer until needed.”

If you’re as obsessed with iced coffee as I am, and you hate the watered-down taste melted ice cubes leave behind, the HyperChiller is a total must-buy. It’s ideal for those who are low on time and patience and demand almost-instant gratification. The patented design means there’s really nothing else like it on the market, so don’t waste your time looking for dupes or no-name knock-offs.

Where to Buy the Hyperchiller

Head to Amazon to buy the HyperChiller, where it has over 10,000 5-star reviews (and counting) and ships fast and free for Amazon Prime members. You’ll want to hurry up, though, because summer is rapidly approaching—and you’d hate to go back to ice cubes.

Want more fun product picks and money-saving deals from our shopping experts and Test Kitchen? Sign up for the Stuff We Love newsletter. 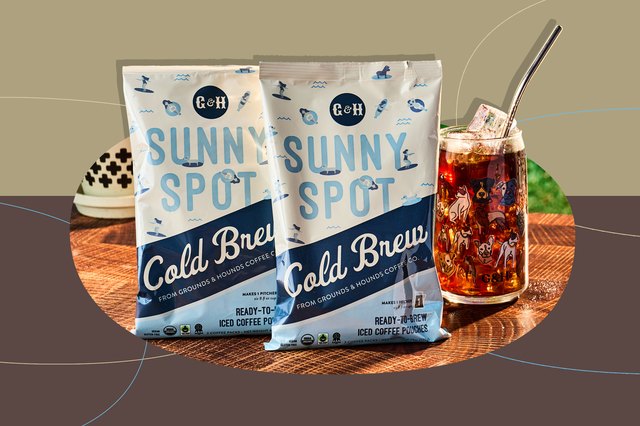 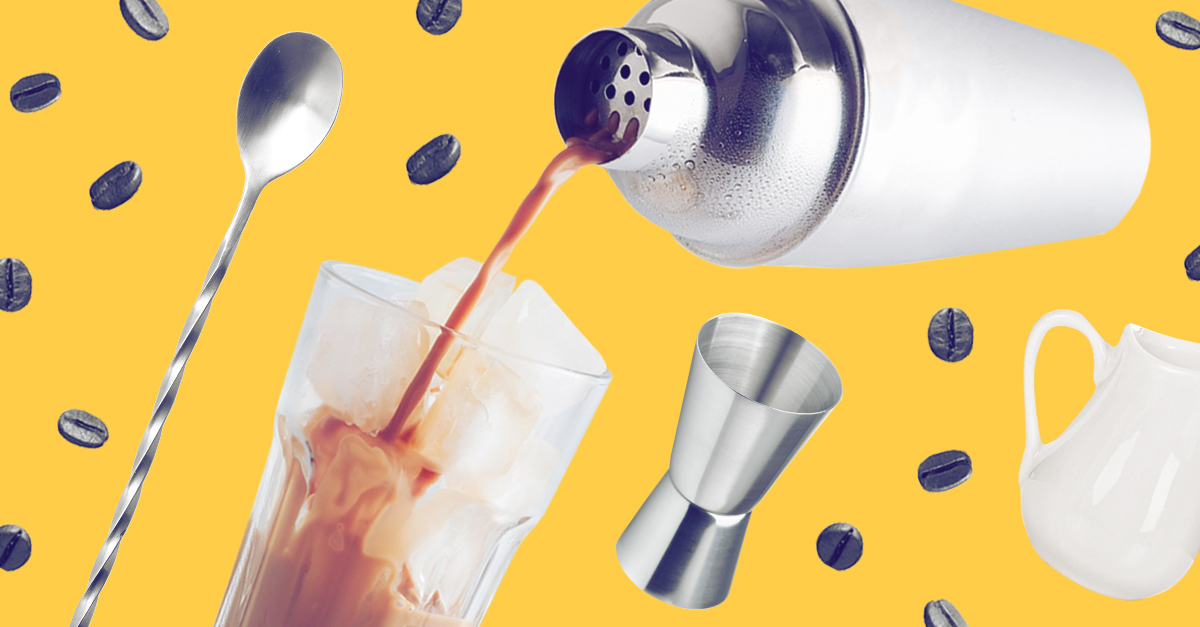