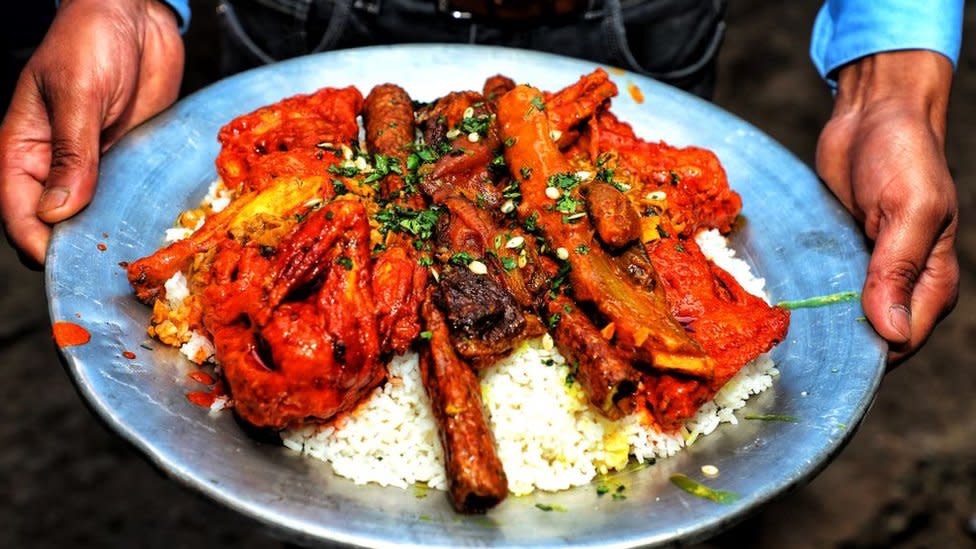 Food has again turned political in India as right-wing politicians call for meat shops to be shut in the capital Delhi during the Hindu festival of Navratri. But the insistence on casting India, or even Hindus, as vegetarian, ignores the country’s long and intricate relationship with meat.

“If other communities respect the Hindu festival and welcome the decision, we will also show respect when their festivals will be celebrated,” Parvesh Verma, a Delhi MP from the Bharatiya Janata Party (BJP) which governs India, said.

He suggested closing shops across India through the nine-day festival – which began on 2 April – during which many Hindus fast and abstain from eating meat.

The opposition – including Delhi’s government, led by the Aam Aadmi Party – has bristled at the suggestion. It’s the first of its kind in the food-loving capital, famous for its buttery sweet chicken curry and smoky, melt-in-the-mouth kebabs.

Mr Verma seems to be ignoring the fact that Ramadan is already under way and meat is a big part of the iftar or evening meal with which Muslims break their fast. But he also appears to believe that meat shops are owned and mostly frequented by Muslims – and that all Hindus across India, or even Delhi, celebrate Navratri.

History, data and lived experience all contradict him. The Indian diet, in its sheer range and ingenuity, defies the easy categories – Hindu or Muslim, vegetarian or non-vegetarian – that the right-wing thrives upon.

“It’s deeply unfortunate because Indian traditions are more complex than that,” says Vikram Doctor, an editor at The Economic Times who writes extensively about the country’s food.

“India has a very old meat-eating tradition and a very deep vegetarian tradition, which is also important. But I am often forced into taking a position [to defend one over the other].”

The irony, he adds, is that it’s the progressives who defend meat-eating in India, unlike in the West where the left often argues for less meat on the table, and more sustainable, climate-friendly food habits.

“In India, vegetarianism is being weaponised by the right,” Mr Doctor says.

Until now, the battle over food was largely restricted to beef. Hindus consider the cow sacred and its slaughter has long been banned in most Indian states.

But the war on beef has intensified since Prime Minister Narendra Modi’s Hindu nationalist government swept to power in 2014. His party has shuttered slaughterhouses in stronghold states and Hindu right-wing groups have lynched Muslim cattle farmers.

There is a visible effect – when beef does appear on menus in cities such as Delhi now, it’s often described as just “meat”; upscale meat sellers – who offer imported pork ribs and lamb shanks – don’t stock it; and those who eat beef sometimes half-jokingly whisper the word.

This runs counter to the fact that while many upper-caste Hindus do not eat beef, millions of Dalits (formerly untouchables), Muslims and Christians across India do. It’s also a popular meat across communities in the southern state of Kerala where only a minority avoid it for religious reasons.

Game meat was integral to Indian diets since 70,000BC, says Manoshi Bhattacharya, a clinical nutritionist who has researched Indian dietary traditions.

History suggests that beef and wild boar were consumed widely in ancient India as far back as the Indus valley civilisation. Animal and cow sacrifices were common in the Vedic era, between 1500 and 500BC – the meat was offered to the gods and then consumed at feasts.

So, it wasn’t Muslim kings or invading armies that brought meat-eating to India, as the right-wing often suggests. Rather, existing diets changed in response to new empires, trade and agriculture. Over centuries, beef and then meat disappeared from the diets of brahmins and certain other upper-castes. The reasons vary but religion was not the only driver.

Dr Bhattacharya says her research shows that brahmins in southern India ate meat at least until the 16th Century. In the north, they gave it up, along with some other upper-castes, only in the late 19th Century.

She believes colonialism, which altered land use, agriculture patterns and trade, and wrought famines, played a big role in the making of the modern Indian diet – a predominance of rice, wheat and dals.

But as with every rule in Indian cuisine, there is an exception – some brahmin communities still eat meat. Kashmiri Pandits are famed for their rogan josh, a rich gravy of lamb or goat meat cooked with a heavy dose of red chillies; in Bengal and along the southern Konkan coast, a variety of fresh fish is eaten in brahmin homes.

Today, beef is the least popular of all the so-called non-vegetarian staples on offer – fish is at the top, followed by chicken, mutton and finally, beef, according to data from India’s National Sample Survey last year.

It’s hard to pin down exactly how much meat Indians consume. When asked if they are vegetarian, 39% said yes to a Pew survey and 81% said they eat meat, but with restrictions – either they don’t eat certain meats or avoid meat on certain days of the week.

But government surveys give a lower number – just a quarter of rural households and a fifth of urban ones reported having eaten meat (or fish) over the previous week, according to the 2021 survey. This doesn’t necessarily mean that the rest are vegetarian, only that they hadn’t eaten any meat in the seven days before the survey. Experts say surveys also routinely underestimate meat-eating because people of lower castes might be more reluctant to disclose it.

“We are vegetarians who ‘also’ eat meat,” Dr Bhattacharya says.

And that is Mr Doctor’s point as well – India, he says, is one of the only cultures in the world where vegetarianism was adopted early on among the elite, even as others continued eating meat.

The result is a diverse and delectable table which includes meat without always making it the hero of the meal.

Mr Doctor, who lives in Goa, says he would describe the local food as “semi-vegetarian”. A favourite example is a pumpkin curry laced with dried prawns, which he says is both nutritious and delicious.

“When people come to Goa, all they want is meat. But Goans don’t eat a lot of meat. Even Catholic food here is a lot of pulses with a little bit of meat or dried fish.”

He says there are many such examples – a popular Dalit recipe in the southern state of Tamil Nadu cooks green beans with dried offal to “bulk up” an otherwise vegetarian meal.

But he fears these clever and sustainable cooking traditions are disappearing – “You will not find semi-vegetarian foods on restaurant menus.”

He’s right – as someone from Hyderabad, a city famed for its Muslim cuisine, the dishes I count among my favourites are hard to find elsewhere – dalcha, a spicy soup of lentils and vegetables stewed with lamb; or tomato kut, eggs cooked and soaking in a thick, tangy tomato gravy.

Given India’s rich vegetarian repertoire – with its healthy dose of meat and seafood on the side – Mr Doctor believes we have an opportunity to craft a healthier, more climate-friendly eating tradition.

“India’s vegetarian traditions should be celebrated,” Mr Doctor says. “But what [they] are doing is forcing them on people – and that convinces no-one.”