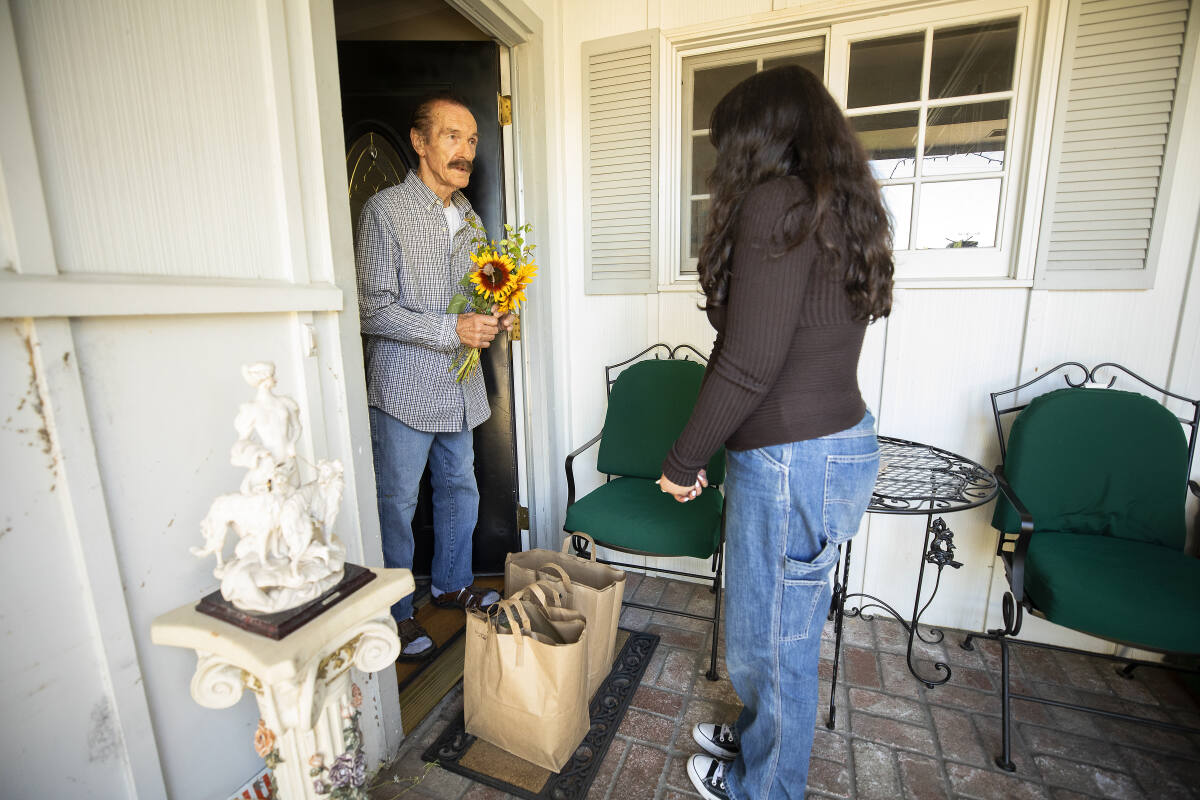 Every Friday after school, Elise Curtis jumps into a car, her mom, Tambra, at the wheel, and hightails it to Ceres Community Project not far from her home near Santa Rosa’s Spring Lake. There is barely enough time to get from Maria Carrillo High School to Ceres and load her precious cargo of food fresh from the kitchen. But Elise rarely misses a week.

For the next hour, mom and daughter drive through town to knock on doors and deliver healthy meals to people with serious, often life-threatening, illnesses. The soft-spoken teen may, for some grateful recipients, be the only other person they see that day. Making it a warm and personal encounter is essential. Elise loves the one-on-one interaction, however brief, even if few words are spoken.

Elise, 16, is the only youth under 18 in the team of volunteers who deliver meals through Ceres, founded 15 years ago by Cathryn Couch to teach young volunteers to cook nourishing meals for people in the community with cancer and other serious health conditions.

Most on the delivery team are retirees. But when when the pandemic hit two years ago, Elise, then a freshman, wanted to stay engaged in volunteering, something she had done since she was 8 and served as a puppy petter for Canine Companions, the service dog training program headquartered in Santa Rosa.

Delivering Ceres meals was one volunteer option still open, and Tambra Curtis, an attorney in the Sonoma County Counsel’s office, was willing to team up and drive, even though it means she sometimes uses vacation time or has to make up work hours later.

For Elise, it sometimes means saying no to friends who want to hang out at the mall on a carefree Friday afternoon. On Friday nights when the Carrillo Pumas have a game, it’s a squeeze for Elise, who also is a cheerleader. She just makes it work.

“I don’t regret being here,” she said on a recent afternoon, seated under a tree in the Ceres garden, which was flush with tomatoes and other summer crops packed with nutrients. “I really love doing it and I really love helping Ceres out and making people’s day better.”

Service is a way of life for Elise, who is constantly seeking new ways to help. During the pandemic she and her older sister, Tanna, now 18 and a freshman at Cal Poly San Luis Obispo, created a website and brochure that listed help and legal services, in Spanish, for Latina women in the community who may be victims of domestic violence (lantinxabuseservicessc.org).

Last year, Elise was selected to participate in a teen naturalist program at Pepperwood Preserve in Santa Rosa to assist with planting native grass and other projects. She also was a delegate for the American Red Cross Northern California Leadership Development Center Conference, where she cultivated leadership skills such as teamwork and public speaking through workshops on disaster preparedness, diversity and international services. She later gave fire-safety presentations to neighbors to help them be better prepared for fire season.

For her continual efforts to help her community any way she can, Elise is August’s North Bay Spirit Award winner. A project of The Press Democrat and Comcast, the award honors people who go the extra mile to be of service and take initiative, often identifying a need in the community and finding a way to fill it.

“Elise is a kind and reliable part of our team of delivery angels,” said Lisa Baiter, who coordinates deliveries for Ceres’ clients in Sonoma County. “She always shows up with a smile on Friday afternoon after a full week of school to deliver nourishing meals to our clients.”

Ceres expects to deliver 200,000 meals to up to 1,600 families in Sonoma and Marin counties this year. That requires a massive army of volunteers. Elise is among 1,000 volunteers who work out of three sites in Santa Rosa, Sebastopol and Novato. Among those, 400 are teens like Elise, who work in the kitchen and the garden, a new assignment for which Elise has recently begun training.

“What we hear over and over again from clients is how much it means to them that people who don’t know them — particularly teenagers busy with sports and school and their social lives — take the time to prepare these meals, which are really delicious,” said Deborah Ramelli, development director for Ceres. “And they also talk about how the food is made with love and filled with love. For someone who is ill, that often means as much as the food itself.”

The program teaches teens practical kitchen and garden skills along with professional and social skills such as leadership, teamwork, commitment and responsibility.