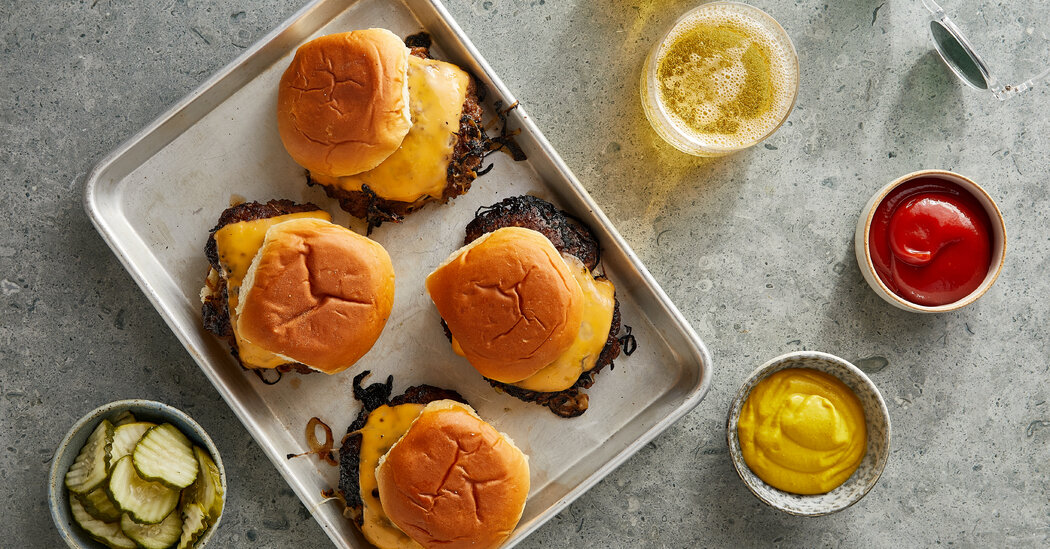 Humans have been cooking meat with onions for at least as long as recipes have been recorded, but I’d argue that the combination was simplified to its primal core during the Great Depression, when Homer Davis and his son Ross invented what they called the Depression burger at the Hamburger Inn in El Reno, Okla.

By smashing shaved onion — a half-onion’s worth per burger — into a few ounces of ground beef, they not only offered his customers a better value in their five-cent hamburger. They also inadvertently created a sandwich that, like pizza margherita or a peanut butter and jelly sandwich, I consider a culinary endpoint: a creation so perfect in its simplicity that it cannot be improved upon, only tweaked.

“De Re Coquinaria,” the oldest known cookbook, includes numerous dishes for meat stewed or simmered with onions and spices. Likewise, onions have been a part of hamburgers since before the modern hamburger as we know it — a patty of beef sandwiched in a soft bun — was invented. Recipes for proto-hamburgers, like the Hamburg steak listed on an 1837 menu from Delmonico’s restaurant in New York, included onions or garlic blended into the meat patties. In his book “The Hamburger: A History,” Josh Ozersky credits Walter Anderson, a founder of White Castle, the world’s oldest fast-food hamburger chain, with first thinking to place onions directly on the griddle with the beef to “bathe in the juices of the still-cooking meat.” Those sliders are still cooked on a bed of onions today.

But what makes the Oklahoma onion burger (as the Depression burger has come to be called) different? The volume of onions is certainly part of the equation, but it’s also how they’re cooked.

Even in El Reno, the exact cooking process varies from diner to diner, but the basics are the same: A small ball of ground beef is placed atop a griddle, then topped with a confusingly large haystack of very thinly sliced onions. The cook then aggressively smashes the beef into the griddle, spreading it into a rough patty large enough to overhang the edges of a bun, while simultaneously embedding the onions into the meat. When juices start to collect on top of the patty, it’s scraped up and flipped, onion side down, and seasoned with salt and pepper.

It’s topped with a slice of cheese, if requested, followed by a soft, untoasted bun — heel stacked on crown stacked on burger — which warms and softens in the onion-scented vapors rising through the beef. A few moments later, the entire stack is lifted with the spatula, the heel of the bun is removed from the top and placed underneath. Then, with a light squeeze and pull, the spatula is removed, and the burger is placed on a plate.

The onion burger has reached newfound popularity in recent years, largely as a result of George Motz, author of “Hamburger America” and host of First We Feast’s “Burger Scholar Sessions” series on YouTube. (In fact, the first time I had a burger specifically referred to as an Oklahoma onion burger was in 2009, when Mr. Motz and Mr. Ozersky hosted small bimonthly gatherings at R.U.B. Barbecue in New York, where the chef Scott Smith recreated an array of regional burger styles from Mr. Motz’s book.) During the pandemic, Mr. Motz delivered onion burgers via a “burger slide,” a chute that dispensed burgers from a kitchen window in Brooklyn to hungry socially distanced customers on the street below. He has since wrapped up a Northern European tour, serving onion burgers to sold-out crowds. His YouTube videos on onion burgers have racked up millions of views.

I talked to Mr. Motz on the phone about what makes the onion burger work so well. According to him, the answer is twofold. First, it’s how, in a well-prepared onion burger, you achieve multiple onion flavors in the same sandwich: the sweetly caramelized ones in direct contact with the griddle, the soft steamed rings pressed into the meat and gnarled, nearly burned shreds that frizzle out of the burger’s edges the way my daughter draws hair with crayons. Beyond that, there’s the onion vapor that permeates the soft bun. These textures and flavors yield a remarkable depth that varies from bite to bite. But even more important is the amplifying effect that onions have on the beef flavor.

While the bulk onion aroma comes from a class of chemicals called thiosulfinates, a 2000 study published in The Journal of Agricultural and Food Chemistry found that, when isolated, a particular odor molecule (3-Mercapto-2-methylpentan-1-ol or MMP) had the aroma of meat broth. A subsequent 2004 study found that the concentration of this compound can be increased by up to nearly eightfold by slicing and cooking onions. Adding sliced and cooked onions to meat actually makes meat taste more meaty.

Moreover, both thiosulfinates and MMP are compounds created via enzymatic reactions only after an onion is sliced open and its cells spill out their contents. For this reason, when making onion burgers, it’s important to rupture as many onion cells as possible. Slicing the onions paper thin — a task best accomplished with a mandolin-style slicer or a food processor with a very thin slicing blade — is essential. Individual onion cells are also longer along the root-to-stem orientation (do you remember looking at onion cells under your first microscope?), which means that slicing them perpendicular to this orientation — into rings parallel to the onion’s equator — will rupture more cells and thus release more meat-enhancing compounds.

My process for cooking onion burgers at home adheres closely to the original method. My main tweak is in the temperature of my griddle. The diners in El Reno maintain their griddles at a moderate temperature (around 380 degrees Fahrenheit, Mr. Motz says). This is by necessity: Any hotter and the pancakes, eggs and other diner staples that are cooked alongside the burgers would burn.

When I make onion burgers at home, I preheat my griddle the way I would for smash burgers, getting it smoking hot. As I place the patties of beef and onions on an ungreased steel griddle, I smash them with a stiff spatula, concentrating on the edges, and spreading them out so that they cook up lacy thin and deeply browned. Using an ungreased griddle or heavy carbon-steel or cast-iron pan is important — you want the meat to stick in order to brown efficiently.

To scrape them up, I turn over my spatula for more leverage (or, when I feel like pulling out an extra tool, I’ll use a razor-blade wallpaper scraper to extract every bit of brown crust from the hot metal). After flipping the patties and topping them with the buns, I cover the stacked burgers with a folded dish towel, a technique I picked up from Telway Hamburgers, a small chain of slider joints in Detroit. The towel (which I call the Onion Towel, as it now eternally smells like onions, despite multiple washes) traps onion-scented steam directly against the buns, making them extra-soft and oniony. The result is a burger that has the hallmark aroma of the classic, but with a bit of extra browned flavor and texture from the hard sear and an especially intense onion scent.

There is a downside to cooking onion burgers at home: Even with the best ventilation, the same onion vapor that permeates the bun and towel will permeate every porous surface of your home, including clothes, pets and children. If you have outdoor space, this is a simple issue to solve: Mr. Motz suggests placing your griddle or skillet directly on an outdoor grill, cooking and serving al fresco. (This also affords you the opportunity of adding some chargrilled flavor directly to the beef for a delicious variation.)

If you, however, are apartment-bound, open all the windows, find the strongest fan you can, and make sure all residents are in the house when you start cooking — you don’t want to be the only one smelling like onions all week.