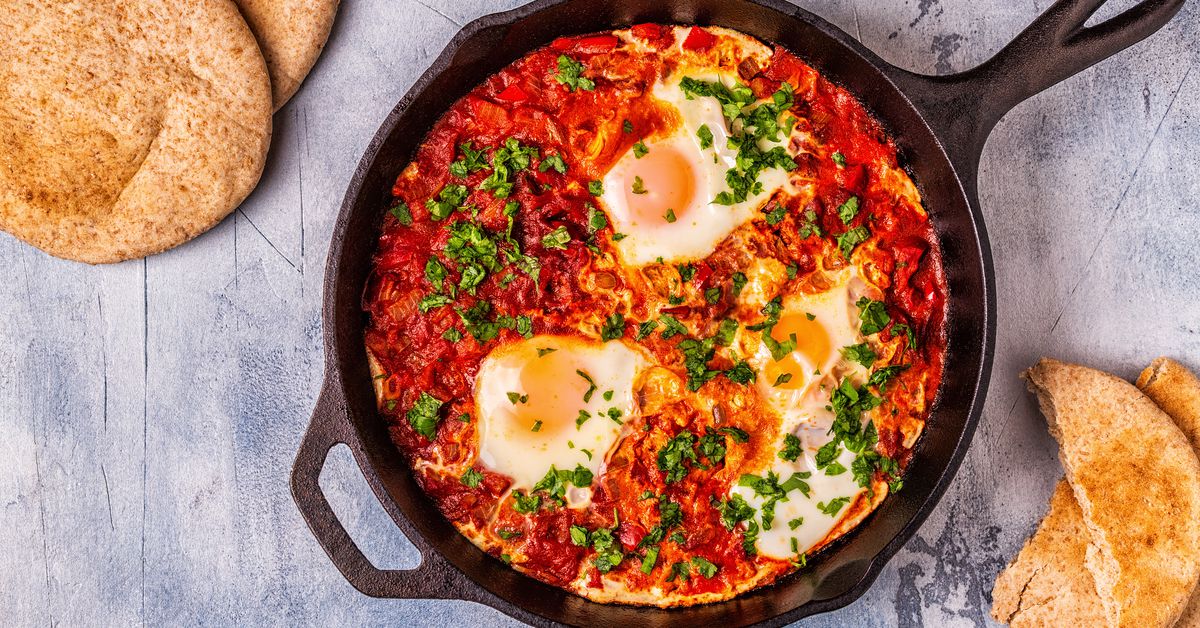 It’s no longer news that more and more people have started incorporating vegetarian dishes into their cooking repertoire. For all manner of reasons, vegetarian food has of late become ever more mainstream, and consequently, vegetarian dinner recipes are now found everywhere. They are so plentiful, in fact, that it can sometimes be hard to choose exactly what to cook when you’re in the mood for a meatless meal. Here, eight Eater editors provide some guidance with their own go-to recipes for cooking veg.

It’s hard to find meatless recipes that aren’t pasta-based, and as someone whose stomach is not happy if she eats a ton of bread every day, it’s sometimes a struggle to figure out how to lessen my meat intake without causing other dietary distress. This is why shakshuka is a savior. The North African dish of eggs poached in a peppery tomato sauce is hearty, flavorful, incredibly easy to make, and also adapts well to riffing. I mostly use Smitten Kitchen’s recipe, but I add other vegetables, change up the herbs and spices depending on what I have around, and occasionally remove the feta cheese if I don’t feel like a dose of dairy. It says to serve it with pita, but it also works well over rice or other grains, or just on its own like an eggy tomato stew. — Jaya Saxena, senior writer

As much as I love tofu, I understand why some people — particularly those looking for a meat replacement — can struggle with its texture: It requires a little more manipulation in order to achieve a meat-like density and level of textural variation. For those people, might I suggest tempeh, the fermented protein from Indonesia? The commercial versions you’ll find at major grocery stores are usually soybean-based and have a dense, hearty texture, straight out of the package. This (vegan!) tempeh-and-kale recipe was my gateway into tempeh, and it’s still the dish I turn to the most often. Crumbling the tempeh into chunks by hand results in bite-sized pieces with craggy corners and lots of texture. In just a few minutes, it’s crispy on the outside, nice and chewy on the inside. Fermentation gives the soybeans a pleasant, nutty flavor, so this dish doesn’t need much to be delicious. — Bettina Makalintal, senior reporter

Ever since I went vegetarian again — after 10 years of meat eating — I’ve suffered from a lack of creativity when it comes to dinner. Snacks, side dishes, and desserts are all easy enough to adapt for a vegetarian diet, but I have lost my touch for main courses. It wasn’t until I went to a restaurant and ordered a big ol’ plate of asparagus with toppings galore as a main dish that I realized, Oh, anything is dinner if you want it to be. Double the number of asparagus in this recipe and make some rice pilaf on the side, and you’ll see the power of the vegetable as standalone dinner in no time. When I made this I didn’t have the caprino fresco cheese the recipe calls for, so I just went with crumbled goat cheese, and I was not mad at the results. — Dayna Evans, staff writer and Eater Philly editor

When spring arrives and I’m either struggling to deal with seasonal allergies or fighting that inevitable cold I get when the weather dramatically changes each day, soup is just about the only thing that will do. This is the one I come back to most often because all but two of its ingredients are kitchen staples (sometimes I’m just missing the mushrooms it calls for, and sometimes I already have frozen peas instead of fresh ones), and it comes together in less than 30 minutes. Plus, it’s open to modifications. My favorite ways of mixing it up have been to add frozen dumplings or thinly sliced asparagus. You can also up the heat by drizzling some chile oil on top, and/or subbing the water for your go-to broth. No matter how you make it, I recommend doubling the recipe to have this soup on hand for a few days, especially if you’re making it to bring yourself back to life. — Patty Diez, network development manager

Alexa Weibel’s vegan cacio e pepe recipe is one of those great back-pocket recipes that’s tailor-made for weeknight cooking: It requires only six ingredients, one pot, and less than 20 minutes of effort. I’ve lost track of how many times I’ve made it, but I can say that it has caused a 1,000-fold increase in my household’s cashew butter consumption. The cashew butter, along with miso and nutritional yeast, forms the foundation of the ersatz cheese, to which you add ladles of starchy pasta water to create a silky sauce. The combination yields a very cheese-like flavor, while a tablespoon of cracked pepper more than fulfills the “pepe” part of the equation. And while I have happily eaten this on its own, it also works well with vegetables — I like stirring sauteed kale and/or broccoli into it. If you don’t have cashew butter, you can substitute tahini; if you’re wary of salt, you can leave out some or all of the miso and just add salt to your taste. In other words, it is very, very hard to go wrong here. Whether you’re vegan or not, this is a dish that can truly be said to be a godsend to weeknight cooks everywhere. — Rebecca Flint Marx, At Home editor

Salad for dinner? All summer long, honestly. Pickling is the solution (no pun intended) for any odd peaches (or nectarines) in a punnet that aren’t up to my frankly wild expectations. You do have to turn on the stove to make the pickling brine, but only to low, and the leftover brine makes a fridge-door go-to for future dressings, marinades, or more pickles. Flat white peaches are good here, but any will do. Once pickled, you could just eat the fruit and dispense with the salad, but I like the recipe more or less as written, finished off with a feta or goat cheese, really anything soft and salty that crumbles. Or, if you have a grill or are willing to turn the stove back on, you could make this a main with a few slabs of halloumi and a loaf of sourdough. I’m sure any lettuce will work, but the contrast of firm and buttery makes it more interesting, actually. Best eaten while the neighbors’ outdoor cats flop around on the brick pavement, ideally after 9 p.m. on one of the longest nights of the year. — Rachel P. Kreiter, senior copy editor

After the meat-cheese-booze self-pity fest of 2020 and 2021, I have spent much of 2022 trying to remind myself that vegetables (and optimism) are a thing. I’ve added a number of easy, quick, plant-based recipes to my repertoire, but sometimes dinnertime calls for a project. This mushroom bourguignon recipe is what I’d call moderately fussy, with lots of time spent chopping and searing and browning and braising, but the results are nothing short of restaurant-quality. As a main course, this dish is stunning. I’ve served it at dinner parties, to my deeply carnivorous parents, and even on Valentine’s Day to rave reviews. Do not skip the final crisping of mushroom slices to garnish the top. And while the recipe calls for a side of potatoes or pasta, I love to spoon it over a thick pile of stone-ground polenta. — Lesley Suter, special projects editor

In a world where cauliflower has replaced all of your beloved carbs — from rice to pizza crust to tater tots — the versatile vegetable plays only a supporting role in this creamy, carby, comforting pasta dish from Alison Roman. Here, cauliflower and shallots are melted down along with the heavy cream and bitey pecorino to make a decadent sauce that sticks to every ridge of the pasta. The breadcrumb topping, which is made with lemon zest, chives, red pepper flakes, and pecorino, adds the perfect amount of brightness and texture. I often use cascatelli pasta (you can see how it’s made in our video!) instead of rigatoni so that I can scoop up all the creamy goodness of this dish, but any tube-ish pasta will do. — Terri Ciccone, associate director of audience, analytics, and operations