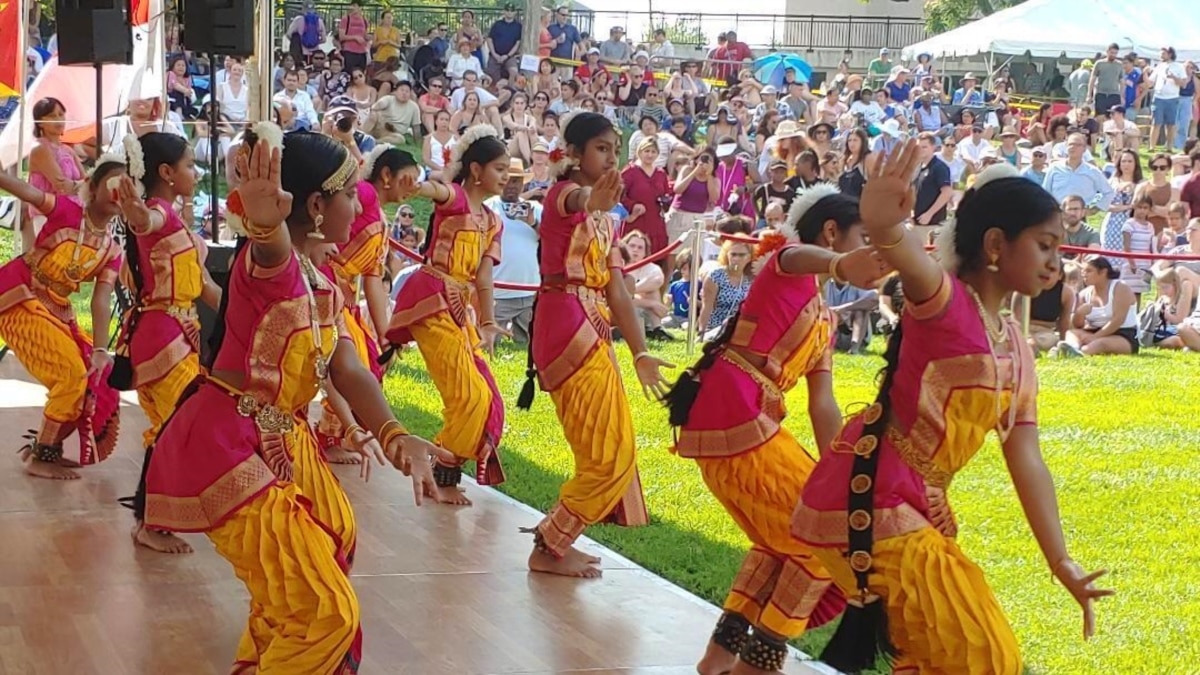 The Washington, D.C., area is multicultural, with embassies, international businesses and a host of ethnic restaurants.

People from Ethiopia, El Salvador, the Caribbean and more live in the city and the surrounding Maryland and Virginia suburbs.

To showcase the food, artisans and traditional dance of these many cultures, the Around the World Cultural Food Festival recently took place for the 6th year. The event is the largest outdoor cultural food festival in the Washington area.

With flags flying, 40 nations were represented at a park in historic Alexandria, Virginia. The event featured African countries, such as Nigeria, Kenya, Rwanda and Ethiopia. Thailand, Lebanon, Jamaica and El Salvador were also included.

Corina Serbanescu, the event manager, said the festival provides the opportunity to learn about various cultures.

“Although the Washington area is multinational,” she said, “people don’t necessarily know about one another’s cultures, including the food.”

Feride Ozkan, owner of Istanbul Kitchen in McLean, Virginia, was giving visitors a taste of Turkish cuisine including chicken borek, made with vegetables and mozzarella cheese, and simit, a Turkish bagel.

“Turkish cuisine consists of a melting pot of cultures brought together over the centuries,” she said. “I’m serving food that I learned to cook from my mom that she learned from her mother.”

As Devin Holum from Washington took a bite of borek made with beef, he said, “I had a good time going to Turkey on vacation a few years ago … and I’m enjoying the food and feeling like I’m back in the country again.”

With a long line at another booth, Sus Grondin-Butler was serving Indonesian chicken satay. Considered a national dish of Indonesia, satay is made from skewered and grilled marinated meat.

“What makes Indonesian food unique is that each of the islands has their own style of cuisine. Some is sweeter, while other food is spicier,” she said. “Since Indonesia has the largest Muslim population in the world, there is also that influence.”

Visitors were also given a taste of cultures through traditional dance performances.

Adriane Whalen, artistic director of the Washington-based troupe, said, “There’s the beauty of the dance and the costumes, of course, but I also love that it celebrates women coming together. Some of the moves today can be seen in hip hop and jazz dancing.”

Shortly after, the colorfully clad Armonias Peruanas — which means Peruvian Harmony — kicked up their heels.

Lourdes Curay, the troupe’s director, said, “We have hundreds of dances that are unique from different regions of Peru, and we wanted the audience to see the richness of our country.”

Ricardo Martinez, who grew up in El Salvador, danced to the music.

“You can’t help but get on your feet because the music and dancing are so exciting.”

Another popular performance featured Indian dancers from the Kalavaridhi Center for the Performing Arts in Herndon, Virginia.

“Traditional Indian dancing tells stories about right and wrong and draws a lot from Indian mythology,” she said. “The dances are also connected to nature, where every living creature is respected.”

Besides dance, vendors were showing off their artistic sides.

Henna artist Kavita Dutia immigrated from India to the United States 15 years ago.

“The art of applying henna on hands and feet is a very old custom,” she explained as she painted the design of a leaf on a young woman’s hand with a brown paste. “Henna brings happiness and joy to life.”

“I thought it would be fun to do this,” said Cara Shawly, a college student. “It’s pretty and like getting a tattoo but one you know won’t last forever.”

Items from around the world were being sold at the festival.

Monica Mensah from Ghana was selling traditional clothing and baskets. Her business is called Back to the Roots.

“I am here to showcase Ghana,” she said. “I want everyone to know that Ghana has a beautiful culture with peaceful, friendly and welcoming people.”