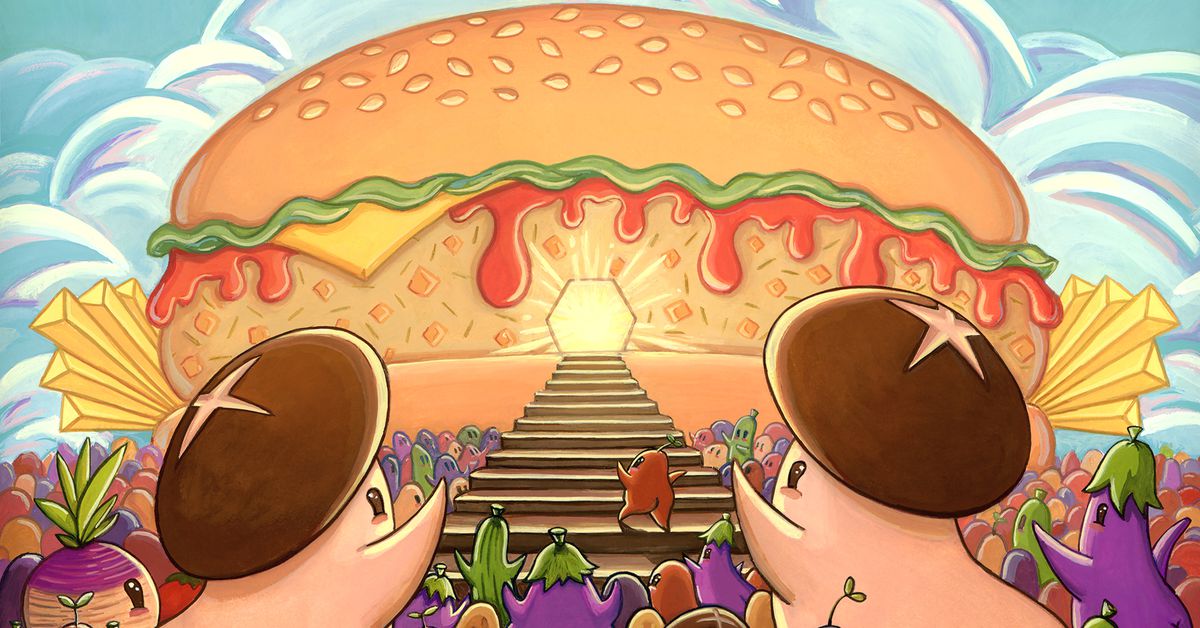 In recent years, Impossible and other “meatless meat” companies like Beyond Burger have accomplished full market saturation. After being praised by trendsetting chefs, the brands’ meat-substitute patties have moved to fast-food chains and grocery stores, earned billions in investments, and expanded from faux burgers to faux sausage and faux pork. As Beyond writes on its website, it’s achieved that success by “deliver[ing] the meaty experience you crave without the compromise.” That concession nods to the veggie burger’s place in many peoples’ minds: It’s often considered among the sadder replacement offerings at a cook-out.

It doesn’t need to be that way, of course. Plenty of cultures where vegetarianism is prevalent have come up with countless flavorful and nutritionally sound meals that don’t require meat substitutes. But the burger, a Western invention, was created with meat in mind, and while veggie burgers are complex and innovative and mouthwatering, to many, they will always be a simulacrum. It’s this assumption that a veggie burger must be meaty that has allowed a more modern, Western, and whitewashed wave of fake meat to capture stomachs over the past decade. The promise that omnivores won’t have to sacrifice the flavor and texture of red meat is a fine enough project in theory, and one that could live peacefully alongside people who don’t need imitation meat to be vegetarian. But restaurants have been catering only to the former, to the detriment of flavor. A good veggie burger is a beautiful thing. Restaurants and fast-food counters need to think bigger than fake meat.

When Divya Murthy moved to the U.S. from India, she says she remembers being surprised at the lack of veggie burgers at American chains “because the India McDonald’s had so many veg options.” About 20 to 25 percent of India’s population is vegetarian; America, by contrast, is only about 5 percent vegetarian, and so catering to that population has largely been viewed as unprofitable. “The way vegetarian options are presented like second-to-last on most menus is in itself a giveaway in terms of prioritizing vegetarian options,” says Murthy.

The rise of imitation meat has moved thet needle, somewhat. Some restaurants, like Carl’s Jr., are simply adding Impossible and Beyond to the menu as their first and only vegetarian sandwich option. Elsewhere, vegetarians have noticed the removal of existing veggie burgers in favor of imitation meat. Krista Navin has been a vegetarian since she was a teen, and says these imitation meats have been creeping onto more menus. It really hit home when Burger King replaced its veggie patty — made by vegetarian stalwart brand Morningstar Farms — with the Impossible Whopper. “I find those types of burgers uniquely off-putting,” Navin says. “I think they have actually done a really good job making them like the real thing and that is exactly the thing I don’t want.”

Murthy says she felt queasy the first time she tried an imitation meat product. “For someone looking for a shroom or bean burger, the [fake meat] version was just not appetizing at all.”

Unless a restaurant plans on making its name specifically around its veggie burgers — like Superiority Burger, Bareburger, Lekka Burger, or Burgerlords — imitation meat seems easier for restaurants to serve. In early 2021, Impossible slashed wholesale prices “in an effort to get closer to price parity with conventional meat products,” and because it cooks like meat, it won’t require extra training for restaurant cooks. (There’s also the fact that many of these menu items don’t even wind up being vegetarian — chains like Burger King, Carl’s Jr., and A&W have had to specify that their imitation meat burgers, unless specifically ordered as vegan, are cooked on the same griddle as meat, and could come coated in beef drippings.)

In 2015, Frederick Guerrero founded Burgerlords, a vegan burger restaurant which explicitly states “our intention has never been to create a burger that replicates meat.” Like many, Guerrero never liked the taste and texture of meat, and wanted to let the veggie burger shine. But when he opened, he says, they also had a beef burger on the menu. “I would have liked to open it to be completely vegan, but I was nervous,” he says. “It was a different time then as to where we are now with people’s acceptance of vegan burgers and veggie burgers.”

Guerrero equates what Impossible and Beyond are doing with the ubiquitous diner menu Gardenburger of the ’90s. “Impossible is a veggie burger now. Every veggie burger, when people see that on a menu, they expect it to be this fake meat patty,” he says. Which is certainly frustrating for his restaurant. But he has noticed its prevalence has coincided with greater curiosity about vegetarian and vegan food, such that Burgerlords no longer offers a beef burger. “There’s a lot of people that maybe were introduced to veggie burgers through an Impossible [or] Beyond and now they’re like, Oh, what else is out there?”

Perhaps your average diner or fast-food restaurant will continue replacing its veggie burgers with Beyond burgers, which would be a shame for many. But Guerrero hopes this becomes an opportunity for the places that do serve veggie burgers to get more creative: HiHi Room and Win Son Bakery in Brooklyn both have mushroom patties available, and Rippers continues to sell its beachside veggie patty. Tejal Rao wrote about the recent boom in vegetable patties in Los Angeles for the New York Times, like Spoke Bicycle Cafe’s beet and rice patty, and Stuff I Eat’s burger of nuts, rice, and portobello. Handlebar in Chicago makes a sloppy joe out of “carne de soya,” and Sweet Mustard HTX has soy and quinoa options.

That approach doesn’t have to be relegated to more “upscale” restaurants. Even White Castle has a veggie patty on its menu, alongside its Impossible slider. They’re proof that unlike the monoliths offered by Impossible or Beyond, the “veggie burger” doesn’t have to be just one thing. Veggie burger is “such a cool thing that someone can put their personality into,” says Guerrero. “There’s always going to be an audience for that. I’m obsessed with veggie burgers. I’m not the only person in the world that feels this way about it, you know?”

Johnny Acurso is an illustrator in Portland, Oregon.