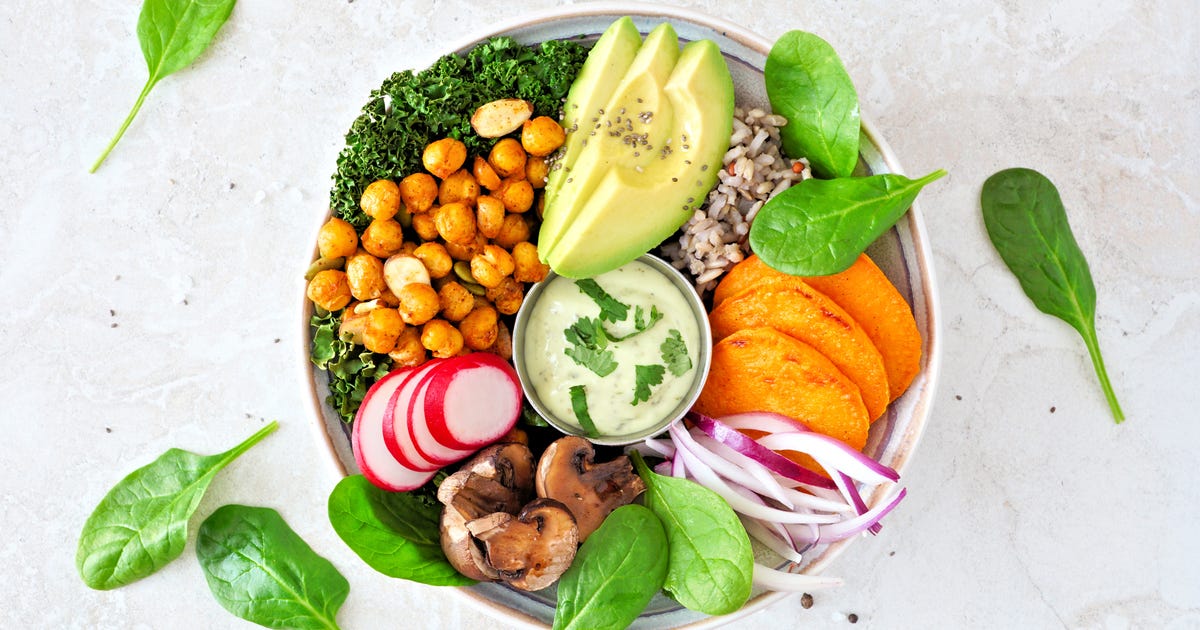 Superfood. Detox. All-natural. These are some of the health buzzwords you come across on social media or while chatting with friends. They might seem like a harmless quirk of our vernacular, but the truth is they can be misleading and even harmful.

Many of these terms are marketing tactics with no science to back up their claims. Research has proven how easily people believe they’re eating healthier because they follow buzzwords on food packaging (“fat-free” and “all-natural,” for example). The terminology makes you think you’re eating something that’s better or safer for you without any actual evidence.

Those ultra-common health buzzwords are just the tip of the iceberg. There are many others that are frequently used or misused. Keep reading to learn which ones you should drop for good.

The term “clean eating” is often used in reference to a diet that has minimally processed foods and instead focuses on foods closest to their natural state. It sounds harmless, because aren’t we constantly being told to eat more fruits and vegetables?

The problem with this term is that it places foods in “good” and “bad” categories (after all, the opposite of clean is dirty) and indicates that there is a right and wrong way to eat. It also disregards those who don’t have access to fresh fruits and vegetables because of where they live and their income level.

Not to mention the vague term is completely made up since there isn’t an actual scientific definition for clean eating. It can also lead to an obsession with healthy eating and put vulnerable populations (such as young adults) at risk for disordered eating. So let’s reserve the term clean eating to refer to foods that have been thoroughly washed and cleaned before consumption.

Growing up in a Latinx household, I was exposed to traditional foods that I didn’t think much of until I was older. I later learned that some foods I was eating, such as quinoa and chia seeds, were suddenly being labeled “superfoods.” Superfood is another term that has no real scientific basis, but is used to describe foods that are thought to have powerful healing properties, like preventing disease or aging.

You may have seen this term splashed across magazine covers, health segments on TV or in your social media timelines. While these foods may provide some health benefits linked to their nutritional content, there isn’t enough research to back the claim that a single food can perform miracles like curing someone’s illness.

Calling something the next “superfood” has become a popular marketing gimmick in a wellness industry that knows how to target people to make a quick buck. A better option is to make sure your diet includes a wide array of nutritional foods instead of focusing on the latest fad ingredient.

People usually turn to detoxes and cleanses for a quick weight loss fix under the guise of flushing so-called “toxins” out of the body. These can come in the form of detox teas, meal replacement shakes, green juice fasting and other methods that require you to eliminate large food groups and consume very few calories. They may not use the word “diet,” but that’s exactly what they are, and not a healthy or effective one either.

There is no scientific evidence to prove that cleanses and detoxes work. Instead they’re an unsustainable (and even dangerous) method to lose weight or “reset” your body. Isabel Vasquez, a licensed dietitian and nutritionist at Nutritiously Yours and Your Latina Nutritionist, says that most of these cleanses may make you feel good initially, but the feeling is short-lived. “These are not sustainable and when we consume excess amounts of certain vitamins, we just excrete them in our urine,” she explains.

Instead of going on an extreme cleanse or diet, Vasquez suggests hydrating adequately and adding fruits and vegetables into your diet for digestion and your overall health.

Your body also doesn’t need a detox, because your kidneys, liver and other organs help with cleansing on a regular basis. But if you think your organs aren’t doing their cleansing duties correctly, it’s best to see a doctor who can run tests and give you a proper diagnosis.

Processed foods are products that have been changed (e.g. washed, cut, milled, frozen) or infused with additives to preserve freshness and improve taste. These foods can include a range of items you’d find in your local supermarket, such as cereal, canned beans, milk, fresh fruits and vegetables, olive oil and your favorite cookies.

The issue with the term “processed foods” is that it’s generally used as an umbrella term implying everything you eat that’s processed is bad for you. Most people, when they think of processed foods, think about fast foods that are higher in calories, fat, sugar and additives.

While it’s true that these foods are processed and should be consumed mindfully, some foods need to be processed to preserve their freshness, boost their nutritional value and make them easily accessible. Some processed foods, like frozen fruit or oatmeal, are perfectly safe and healthy to eat in abundance. Being processed isn’t inherently bad or good. Therefore you can ease your fears about processed foods and instead enjoy them all in a well-balanced diet.

The terms “cheat day” or “cheat meal” basically mean you’re planning on breaking your diet by eating a highly caloric meal or meals that you normally wouldn’t have. They sound like harmless terms, but they can ultimately affect your relationship with food. Gabriela Barreto, a registered sports dietitian, says, “This can set people up for a binge-restricted cycle where they restrict certain foods to only be eaten at a certain time and in a large amount.”

Even more concerning is if an individual already has a history of food addiction since it can exacerbate those issues for them. Barreto adds, “This kind of restriction we know doesn’t work and by setting unhealthy relationships with foods we are more likely to weight cycle when we can no longer uphold those restrictions.”

Instead she recommends eating a balanced diet that includes foods that you enjoy as well as foods that promote health without restriction, learning to listen to your body’s needs intuitively, and working on your relationship with food.

Putting foods into categories such as “good” or “bad” further contributes to diet culture and causes people to tie the way they eat to their self worth. These terms are also interchangeably used to describe an individual’s eating behavior as being bad or good based on what they ate. “Assigning moral value to food only creates more guilt and shame around certain food choices,” says Miriam Fried, a NYC-based personal trainer and founder of MF Strong. She elaborates, “Guilt leads to restriction and restriction often leads to unhealthy behaviors around eating and a negative relationship with food.”

Although foods are made up of different caloric content, nutritional and flavor profiles, the body uses it all for energy. Some foods do have more nutritional value than others, but it doesn’t mean you have to restrict yourself to just those foods. “Can we acknowledge that a piece of broccoli might have more nutrients than a cookie without making the cookie “bad”? Food isn’t good or bad, it simply is,” Fried points out. The more you understand that all of these foods can fit into your diet, the easier it will be to stop labeling them as good or bad.

When the term “all-natural” is used, it suggests that the food you’re eating has been minimally processed and is therefore safer. The truth is this word doesn’t determine if a food is safer for us to eat (as we saw above, processing can be a good thing). In fact, the US Food and Drug Administration doesn’t even regulate this term.

To date, the organization hasn’t established a formal definition for all-natural or natural, though the basic understanding is that it means that nothing artificial or synthetic has been added to a food that normally would not be expected to be in that food, such as dye. The other issue with this term is that it doesn’t account for the complex food production and manufacturing process. Importantly, “natural” doesn’t equal “organic,” which is a term regulated by the US Department of Agriculture. Foods with the USDA organic label must meet strict requirements surrounding the use of antibiotics, hormones, fertilizers and pesticides during the production process; natural foods do not.

According to the National Center for Complementary and Integrative Health, natural products aren’t automatically better or safer for you. In some cases, such as in medicine, it might cause greater risk or side effects to take a natural, unregulated product than a federally regulated medication. Therefore, take this buzzword with a grain of salt or get rid of it altogether.

“Chemical-free” is a buzzword that’s commonly tied to the saying, “If you can’t pronounce it, don’t eat it.” When the average person uses it regarding food (or other items), they’re saying that all chemicals are synonymous with being toxic and unsafe. This is easily debunked because a basic science lesson will teach you that everything that exists around you, including the foods you eat are made up of chemicals.

That doesn’t negate the fact that there are toxic chemicals that should be avoided, or that you might want to steer clear from out of caution, a food sensitivity or just personal preference. If you are concerned about ingesting pesticides, for example, you can stick to certified organic produce., But it’s impossible to completely avoid chemicals in any food. Blueberries, for example, are made up of chemicals known as anthocyanins, chlorogenic acid, pterostilbene and flavonids.

Without context, these chemicals look like something the average person should fear. The truth is marketing plays a big role in fear-mongering when it comes to our food and it’s helpful to have reputable resources at our fingertips to debunk these myths.

The information contained in this article is for educational and informational purposes only and is not intended as health or medical advice. Always consult a physician or other qualified health provider regarding any questions you may have about a medical condition or health objectives.