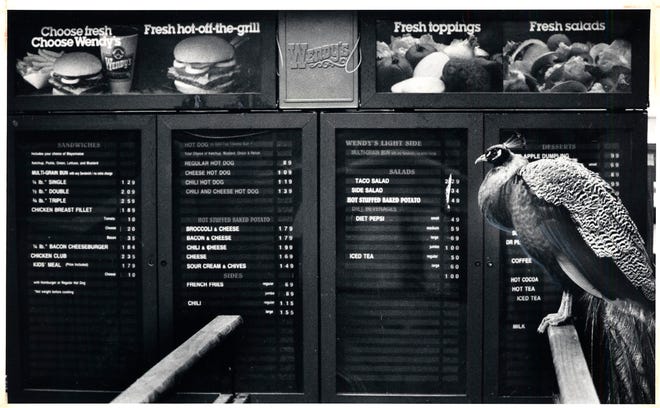 The nation’s first fast food restaurant chain to be located inside a zoo was none other than Columbus’ own Wendy’s and at the Columbus Zoo.

The hamburger chain initially took out a 10-year lease there and opened in May 1985 near the great ape enclosure. Framed posters, sent from zoos around the world, decorated the walls. The location would go on to have a 13-year run.

Doral Chenoweth, the Dispatch’s restaurant columnist (otherwise known as “The Grumpy Gourmet”), wrote in jest after a 1992 visit that Colo the gorilla wasn’t the biggest draw at the zoo that day. Neither were the two giant pandas on loan from China at the time.

“Nope. It’s Wendy’s, that homegrown attraction with international headquarters just one ZIP code to the south” (in Dublin), he wrote. At 3 p.m. on the day of his visit, the restaurant was packed.

In 1993, The Dispatch reported that Wendy’s International was stepping up its expansion efforts by opening a unit inside the hospital at Ohio State University.

Wendy’s would pursue other innovative locations over the years – in malls, airports, as an overpass on a Chicago tollway, on military bases, in motels, and inside a Kmart store. Some concepts were more successful than others.

Contributor Linda Deitch was a Dispatch librarian for 25 years.