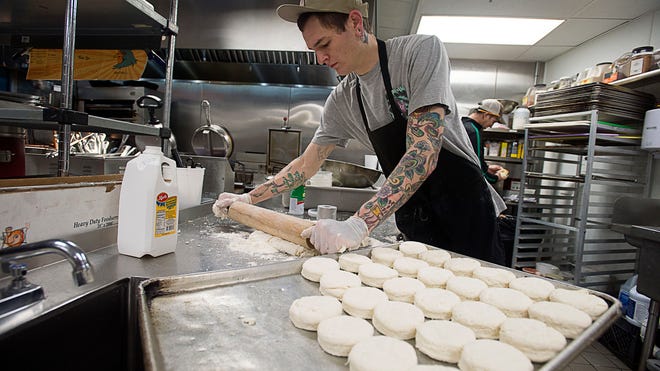 Asheville eateries weighed in on some of the company’s predictions and what they’re doing to keep the city a trendy place to dine.

Ghost kitchens made the trending list for another year and are expected to further expand in 2022, based on Baum+Whiteman’s observances.

Typically, ghost kitchens offer delivery or to-go-only orders and may share a kitchen with one or more other restaurants. Some restaurants went the ghost kitchen route while dining rooms were closed or operating with limited capacity amid the COVID-19 pandemic, as was the case of Asheville’s King Daddy’s Chicken.

A year ago, King Daddy’s Chicken was converted from a brick-and-mortar business into a ghost kitchen operating out of its sister business, Early Girl Eatery, said Jesson Gil, co-owner. The idea was to offer more options that would keep customers coming back during the pandemic.

“We’re still trying to figure out how to get people coming in the door,” Gil said.

Some of the pros of a ghost kitchen are that it cuts overhead costs, such as rent, allows the business to keep staff working, and may reduce the number of employees needed to keep the restaurants operational, according to the report.

More:Asheville restaurants that opened, closed in 2021. What’s coming in 2022.

In 2022, the rising trend may result in downfalls if there’s an oversaturation of ghost kitchens competing against each other and a decline in guests in dining rooms. Also, more chain restaurant brands are cashing in on the industry trend, but risk the consumers losing trust in the restaurant industry, Baum+Whiteman stated.

Ghost kitchens that come off as misleading consumers by selling the same menu items at a higher cost and under a different name are a concern, Gil said. Pasqually’s Pizza was discovered to be a ghost kitchen operating out of Chuck E. Cheese but marketed as a high-end brand.

Some other chains have gone that route, however, that’s not the case with all ghost kitchens, Gil said.

“It feels deceptive when you start to market yourself as a small, gourmet pizza place,” Gil said. “For us, we were offering totally different food and were trying to find more ways to get people to eat more often with us.”

It can further cut into local businesses’ profits as they are having to compete even more with chain brands posing as independent restaurants, he said.

“People have a budget. You can only eat out so many times, and if you go to Cici’s Pizza and they have five different concepts, then you eat at Cici’s five different times, maybe that’s your food budget so you won’t go to someone else,” Gil said.

King Daddy’s menu has since been absorbed into Early Girl Eatery’s as it was determined to be easier on the operations side, Gil said. Later, the restaurant brand is expected to become its own entity once again.

Korean hot dogs go beyond the basic mustard and ketchup to present unique eye-catching and mouthwatering creations on a stick.

A few things that make them stand out are that they are usually made with a rice-wheat flour mix as opposed to cornmeal that’s used for traditional corn dogs. The crispy, fried dish is battered and coated with any combination of ingredients not usually seen on a hot dog, such as French fries, crunchy ramen noodles, pork belly bits or cereal, as described by Baum+Whiteman.

Inside, beef hot dogs might be substituted for fillings from mozzarella cheese to fish cakes. And dipping sauce options might range from cheesy mustard to sriracha aioli bulgogi to a mango-habanero sauce.

Other Korean-style foods predicted to rise in popularity are scrambled egg dishes called Egg Drop Sandwiches made with double-thick bread cooked on a griddle with butter and sauces, stuffed with fillings of choice plus scrambled eggs and topped off with a sprinkle of dried parsley.

About five years ago, Tastee Diner’s former chef introduced Korean-style items on the menu of the Asheville restaurant, including a Korean Dog, said Kim Sams, general manager. It’s not the battered variety but offers the cuisine style’s flavors in a bun and has been popular for diners for years.

“The original menu for Tastee Diner was very Southern, and he wanted to bring some of that Haywood Road hype into the menu and change it up a little bit,” Sams said.

Tastee Diner’s version of a Korean Dog comes with housemade pickled cucumbers, carrots, onions and beets with their signature kimchi and sriracha aioli on top of a 100% beef, nitrate-free hot dog served inside a bun.

Tastee Diner’s menu includes a few other Korean-style dishes prepared as an omelet, biscuit and burger.

“All of our Korean items are a hot market because people don’t expect it in a diner that’s been there for 70 years,” Sams said. “A lot of the young hipster kids for sure love it and a lot of tourists come in since they’re surprised to see it on the menu, and they end up loving it once they get it.” 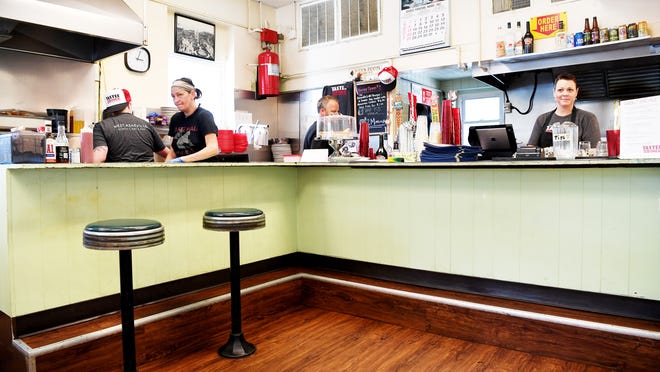 The diner is also on track with Baum+Whiteman’s prediction that breakfast and brunch are what customers want any time of the day. The report states that the increase of people working from home has resulted in breakfast and brunch outings previously reserved for daytime and weekends becoming more in demand on weeknights.

“Breakfast items are going to be the hit for 2022. Last year, everybody stayed in and the year before that people for sure stayed in,” Sams said. “Breakfast is the most important meal of the day. I think it’s going to come back around and we’re going to see more of those blue collars… That’s our biggest thing when kids come in at 2:30 (p.m.) or 3 o’clock, they’re surprised we’re still serving breakfast all day. It’s something that’s a hot market for us to do and to continue to do.”

Bizarre ice creams are on the food trend projection chart. In 2022, customers may see more bold flavors and combinations in the freezer. More savory and unprecedented choices have been spotted in ice cream parlors across the U.S.

In Asheville, customers have looked forward to The Hop’s eccentric flavors for more than a decade, said co-owner Greg Garrison. Small-batch, seasonal flavors to rotate on the online menu throughout 2022 include the Lusty Monk Mustard, Thai Curry, Peach Toasted Miso, Lucuma Dulce de Leche and Fear the Reaper (chocolate made with Carolina Reaper Peppers).

“We built up this following, and people have come to expect these flavors from us,” Garrison said.

Early on, Thai Curry was introduced and received with hesitation. Once customers tried it, they were “hooked on it right away,” he said.

“It has this amazing roller-coaster of flavor where it starts off with sweet cardamon in the front then goes into savory at the end and then you take another bite and cardamon hits twice as hard,” Garrison said.

Some ice creams have come out of collaborations with local chefs, restaurants and breweries. Lucuma Dulce de Leche was created by The Hop’s Ashley Garrison with Peruvian chef Santiago Vargas, who made the dulce de leche sauce and provides the lucuma – similar to vanilla.

Pre-pandemic, the local ice cream parlor hosted themed “Ice Cream Flight Nights” featuring a menu of eight flavors. One event was themed as a taco night in which taco ingredients were provided as ice cream toppings.

The Hop sends out newsletters announcing the bizarre flavors and customers may purchase them via the creamery’s online store.

“Oftentimes within an hour or two of sending a newsletter, we will have sold out of all of the flavors,” Garrison said.

“It’s more sophisticated than a popup,” he said. “It’s not just me rolling up with my ice cream cart. It’s like Chow Chow but in a miniature version where chefs can really have fun with the ingredients that are available. I think that’s opened up an avenue for folks to make some money and show what they can do.”

Tiana Kennell is the food and dining reporter for the Asheville Citizen Times, part of the USA Today Network. Email her at [email protected] or follow her on Twitter/Instagram @PrincessOfPage.