TikTok has been home to some of the weirdest, most creative, and sometimes most delicious viral recipes to hit the internet. Some of the most popular food trends on TikTok date back to 2020 during the start of the COVID-19 pandemic, with things like cloud bread and dalgona coffee taking the internet by storm.

The food certainly didn’t stop there, though. The TikTok app—which is said to have over 1 billion users worldwide—has continued to produce some of the most head-turning food content each and every year, with 2022 being no exception.

We’ve gathered a list of some of the most viral TikTok food trends of this year. Some look delicious, while others seem a bit odd. But either way, these food trends are sure to catch your attention as a memorable moment in 2022.

This year started off on the right foot with this burger crunch wrap, which @simplefood4you posted about on January 1, 2022.  It didn’t take long for this TikTok recipe to become a hit, receiving over 5 million likes.

This recipe—which uses two tortillas, chipotle mayo, a burger, American cheese slices, bacon, onions, and chips—has since sparked creativity from other TikTokers. @kyleistook, a famous TikTok foodie, created his own unique spin on the burger crunch wrap by using Flamin’ Hot Cheetos, both ground up and whole.

@sandraelannan made her own version of a burger crunch wrap, too, using regular mayo, ketchup, and even adding in a few French fries!

When I first saw this video, I couldn’t tell if it was a joke or an actual recipe. In this viral video, the creator, @mandyvjones, films herself making what she says is her pilates instructor’s healthy alternative to Coke. She then continues to pour in a splash of balsamic vinegar and La Croix—although she says any sparkling beverage will do. Next, she mixes it together to make a “healthy Coke.”

Plenty of TikTok creators rushed to their phones to film their reactions to this “Coke alternative.” @partyshirt tried making this viral drink, and didn’t hold back on their initial reactions. After recreating the drink using the exact same ingredients, the two TikTok creators take their first sip, then look into the camera with similar expressions of confusion and mild disgust.

“It doesn’t taste bad—but it doesn’t taste like a Coke, at all,” they say. “Just get a Diet Coke if you want to save the calories,” they add before also mentioning that they wouldn’t recommend this drink or make it again.

RELATED: TikTok Wants You To Try a ‘Dirty Soda’—But What Is It?

The original green goddess salad video was created and posted by @bakedbymelissa in September of 2021. However, this salad—which uses ingredients like green cabbage, cucumber, chives, and green onions—quickly gained popularity, as many TikTokers tried recreating the viral recipe themselves. Even though this video was fairly popular when it first came out, the green goddess salad trend saw a major resurgence in 2022. It seemed everyone all over the world was making this salad this year, with creator @hey.itsbel from Toronto trying it for herself, @clairethenutritionist making a “gut-friendly” version, and even @kroger jumping on board with the trend.

TikTok creator @williamsengg made users swoon when he posted about making his girlfriend a “jelly drink” on National Girlfriend Day. But what is a jelly drink, you may ask? It seems simple enough—all you need to do is place two packs of gummy candy in a glass, add hot water and stir until the candy has dissolved, place in the fridge until cold, and then top with flavored milk.

Creator @justpearlm recreated the recipe for herself. “Since we got no boo, we’re gonna make it for ourselves,” she says in the video, which is also captioned with the very empowering statement, “I’m my own boo.” So whether or not you have yourself a boo, this recipe looks delicious enough to try!

Emma D’Arcy nearly broke the internet during this HBOMax interview alongside House of Dragon co-star Olivia Cooke. During the interview, Cooke reads a question to D’Arcy that would spark the viral obsession with D’Arcy’s voice.6254a4d1642c605c54bf1cab17d50f1e

“What’s your drink of choice?” asks Cooke., to which D’Arcy replies,

“A Negroni. Sbagliato. With Prosecco in it,” D’Arcy says, with pregnant pauses punctuating her rhythmic reply.

TikTokers went crazy for the sound and cadence of D’Arcy’s voice in this clip, and the trending soundbite was soon featured in the background of many social media posts thereafter. Many people filmed them making this recipe for themselves, which is essentially equal parts Campari and sweet vermouth, and then Prosecco poured on top.

Butter boards are taking over the internet—and you either love it or are absolutely ready for this trend to disappear. The idea for these boards are simple: Take a cutting board or serving plate, add butter and your choice of toppings, and voilá! Have everyone dig in with their choice of bread.

Butter wasn’t the only type of board to take the internet by storm. After the butter board concept went viral, TikTok users created their own spinoffs—some real, and some purely satire. Ben & Jerry’s posted about an ice cream board, Jimmy John’s made a ranch board, and TikTok user @darapollak went viral for her soup board.

Whether or not you try your own version of a butter board is up to you, but there’s no denying that this was one of TikTok’s biggest food trends of 2022.

RELATED: I Tried the Viral Tinned Fish Board from TikTok—Here’s Why It Got My Friends Talking

Would you ever pay $17 for a smoothie? This past summer, LA luxury grocery store Erewhon Market teamed up with Hailey Bieber to sell the strawberry glaze skin smoothie. This smoothie was full of ingredients like berries, almond milk, avocado, dates, collagen, sea moss, protein powder, and hyaluronic acid—which perhaps explains the extremely high price point.

Some TikTok creators wanted to find a way to recreate this smoothie in a more affordable way—and so, this trend was born. TikTok user @bearenger made her own version using a Nutribullet.

Although the combination seemed delicious and flavor seemed to be on point based on her reaction, @bearenger’s caption coyly reads, “Mine wasn’t as pretty.” I’m willing to bet that many of us are willing to sacrifice the pretty aesthetic as long as we can save ourselves the $17.

We have to admit that these TikTok videos defined 2022 when it comes to food trends, whether or not we ever actually try one of them for ourselves. With 2023 right around the corner, it makes you wonder what wild and unexpected food trends are in store for the future. 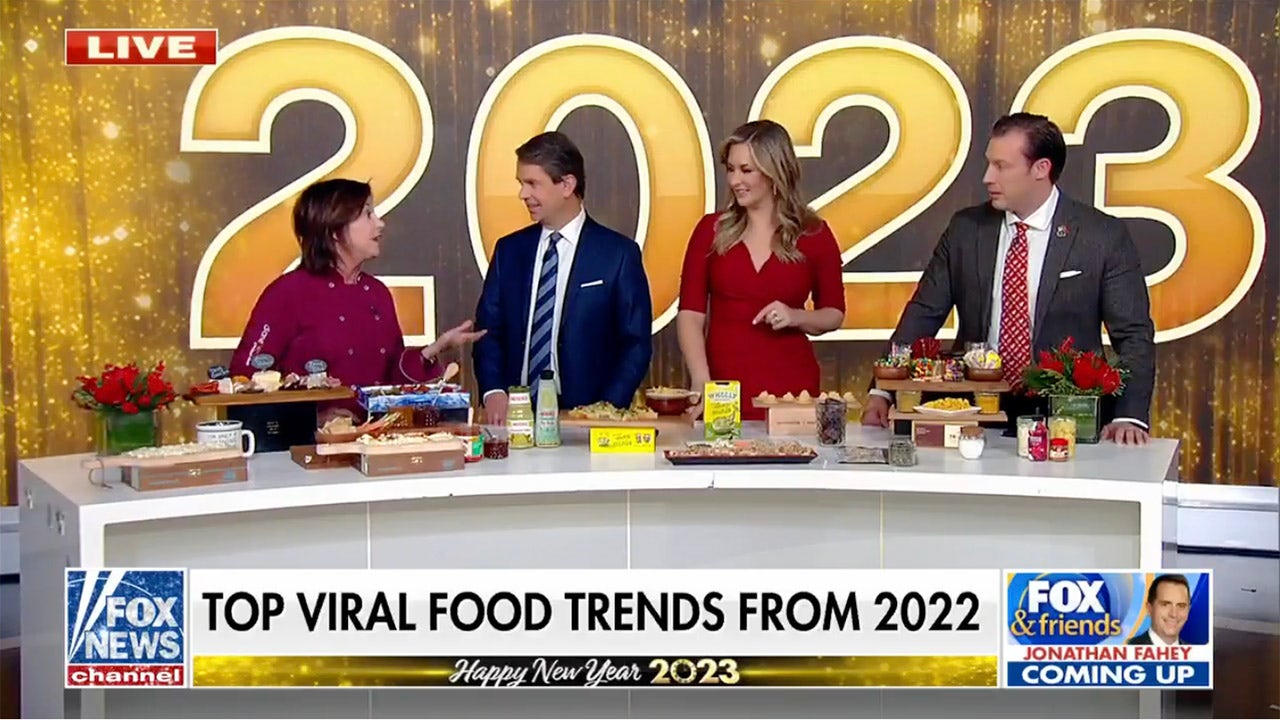 Avocados, home cooking and ‘snackle’ boxes: Here are food trends to watch in a New Year