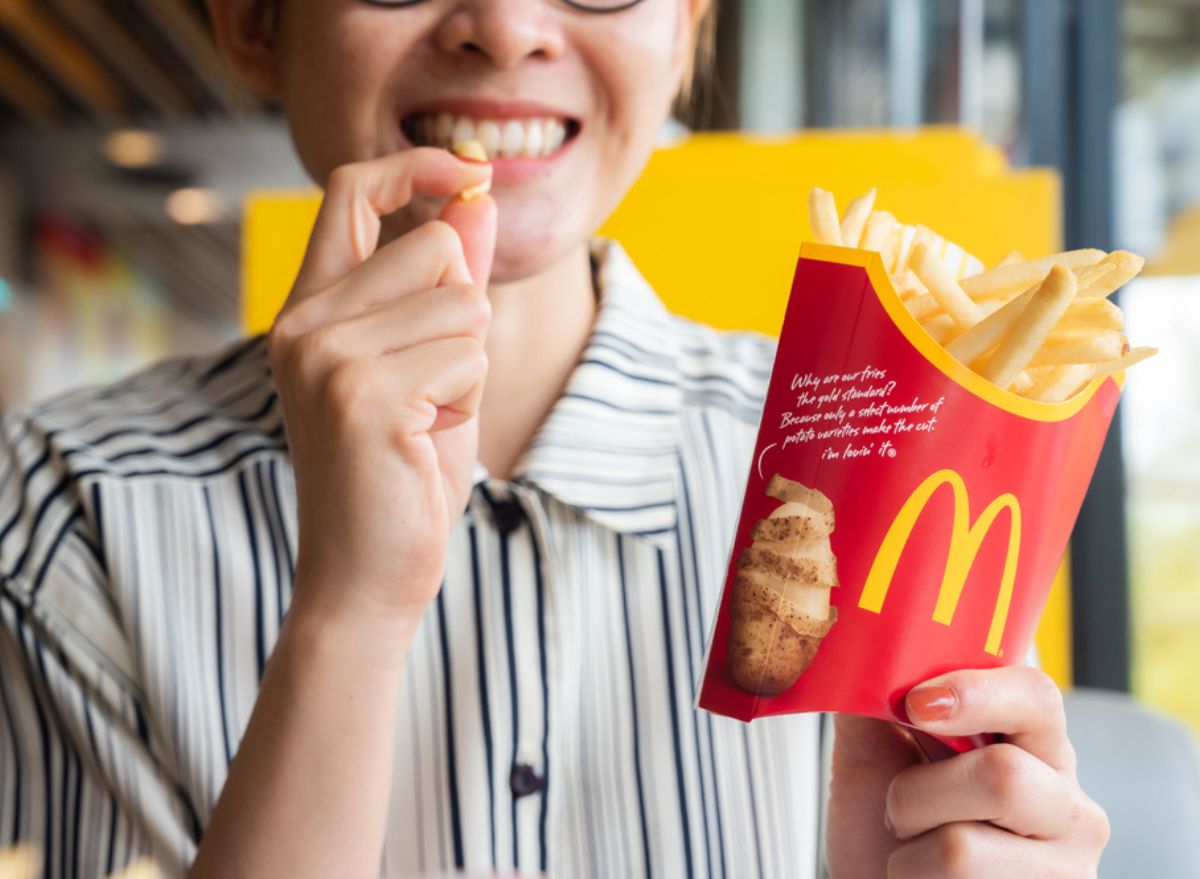 Fast-food franchises get as big as they are for a lot of reasons. Wise business decisions, and a good franchising method, sure, but nobody’s investing in food that tastes bad. Trademark secret recipes and surprising ingredients—sometimes troublesome ones—have kept these businesses booming for decades.

While one can only speculate as to what that exact recipe is, unless it’s shared or leaked, we’re going to use what breadcrumbs we have to break down what ingredients make your favorite chains so tasty. From McDonald’s famous chicken nuggets to Subway’s signature bread, here are the little extra touches that make fast food irresistible.

RELATED: 7 Fast-Food Chains That Use Real Chicken for Their Tenders—Not That Mystery Meat

This is one of the more commonly known “secret ingredients” out there, but that flavor you so instantly associate with the crunch of a chicken McNugget is, among other things, celery salt.

No, there aren’t vegetables in your nuggets. Celery salt is a mixture of ordinary table salt and ground-up celery seeds. Also included is white pepper, a spice primarily used in East Asian cooking that provides a small yet flavorful kick to your food.

Both celery salt and white pepper can be found in any spice aisle, so if you want to recreate that nugget goodness at home, just head on down to the supermarket!

McDonald’s fries are, by many, considered to be the best in the business. Most everyone knows now that the chain was sued over the use of beef fat in the oil used to cook the fries and in the 1990s began using vegetable oil to fry. The chain pivoted from the beefy oil but still adds a beef extract to the oil for flavor

According to the McDonald’s website, “when our suppliers partially fry our cut potatoes, they use an oil blend that contains beef flavoring.” This flavoring, according to ingredients in the fries is derived from wheat and dairy, not beef, so while the fries are suitable for vegetarians, vegans will have to skip them.

While this preparation may seem odd, it’s actually fairly commonplace in the food world. For example, duck fat is a famously delicious medium to cook up flavorful fries, and some high-end restaurants make a lot of money off of just how tasty that is.

Yes, Buffalo Wild Wings is known for its chicken wings, but it has a beefy secret. Okay, Buffalo Wild Wings is technically fast food, but this is an interesting one. The chain—known of course for its chicken—fries many of its menu items in beef shortening, and yes that includes those signature wings. Take a look at the chain’s allergy guide for all of the items that get a hot oil bath in beef fat.

The chain won a lawsuit in 2018 when the vegetarian who brought the suit failed to show any real losses from eating the beef-fried items.

KFC has made a fortune and a legend out of the protected secret of its 11 herbs and spices, and Popeyes is no different. While it may not have the trademark catchphrase or the lore, its cajun blend is protected fiercely under lock and key.

However, some secrets have to be spilled, even if it’s just a little one. Popeyes chicken, according to their nutritional menu, contains MSG.

While many have a negative association with MSG, it’s nothing more than a flavor additive. Now, it’s not great for you, but it’s no worse for you than any other spice. MSG has a long, complex history of stigma in the West.

But, as it stands today, there is absolutely no scientific backing to any claims of headache, nausea, or the like caused by MSG, and in fact, what many foodies have dubbed as umami largely derives from MSG.

This isn’t an ingredient, per se, but everyone has seen a Burger King commercial where the Whopper is referred to as “flame grilled” or “flame-broiled.” This is because Burger King was built on the back of a machine called an “Insta-Broiler” when it first originated that would cook a burger on both sides simultaneously using radiant heat. Apparently, it could cook over 400 burgers an hour.

While Burger King doesn’t rely on that specific machinery anymore, the do still use a broiler that uses real flame. The concept of flame-grilled burgers has long been a trademark of the brand, creating a char-broiled flavor like it’s fresh off your backyard grill.

Have you ever wondered how a Chick-fil-A sandwich can have such juicy chicken? The answer is in the brine. People have long debated whether or not it’s pickle juice. This article claims it isn’t pickle juice, but in fact a salt sugar brine with other spices. However, most pickle juice is just water, vinegar, salt, and sugar with other spices, so who knows?

Brining fried chicken is a long-held staple of the food, with pickle juice being a trade secret for some time. Brining your chicken for at least a few hours before frying it will tenderize and moisten the meat, in addition to infusing flavor deeper into the cut itself.

While of course, Chick-fil-A has a seasoning method that’s almost as protected as its clucking counterparts, it seems to be that brine that gives a distinct feel to Chick-fil-A chicken.6254a4d1642c605c54bf1cab17d50f1e

Actually, the Supreme Court of Ireland ruled that Subway cannot legally call its product bread within Irish borders because of its high sugar content. Now, that may sound alarming, but sugar is actually a mainstay component of many types of bread that allows it to maintain its moisture. Sugar is hygroscopic, meaning that it attracts and holds moisture. So, without sugar, most bread would be dry and pasty.

Subway’s sugar-to-flour ratio is about 10%, much higher than the typical ratio used when making bread, but that’s what gives it its signature fluffy texture. Is that necessarily the healthiest thing in the world? Perhaps not, but that sugar is a key ingredient to making Subway bread what it is.

Who goes into a fast-food restaurant and asks to see a list of ingredients before diving into its golden, salty fries? Right, almost no one. But if you did, you’d find that many of the restaurants— including McDonald’s and Burger King—have a hidden sugar in the fries called dextrose. This ingredient is mainly to ensure that the fries come out of the fryer golden brown and delicious because sugar brown in a process called caramelization, but sugar, of course, also tastes good. In case you’re curious, these are the chains that use fresh-cut potatoes for their fries.