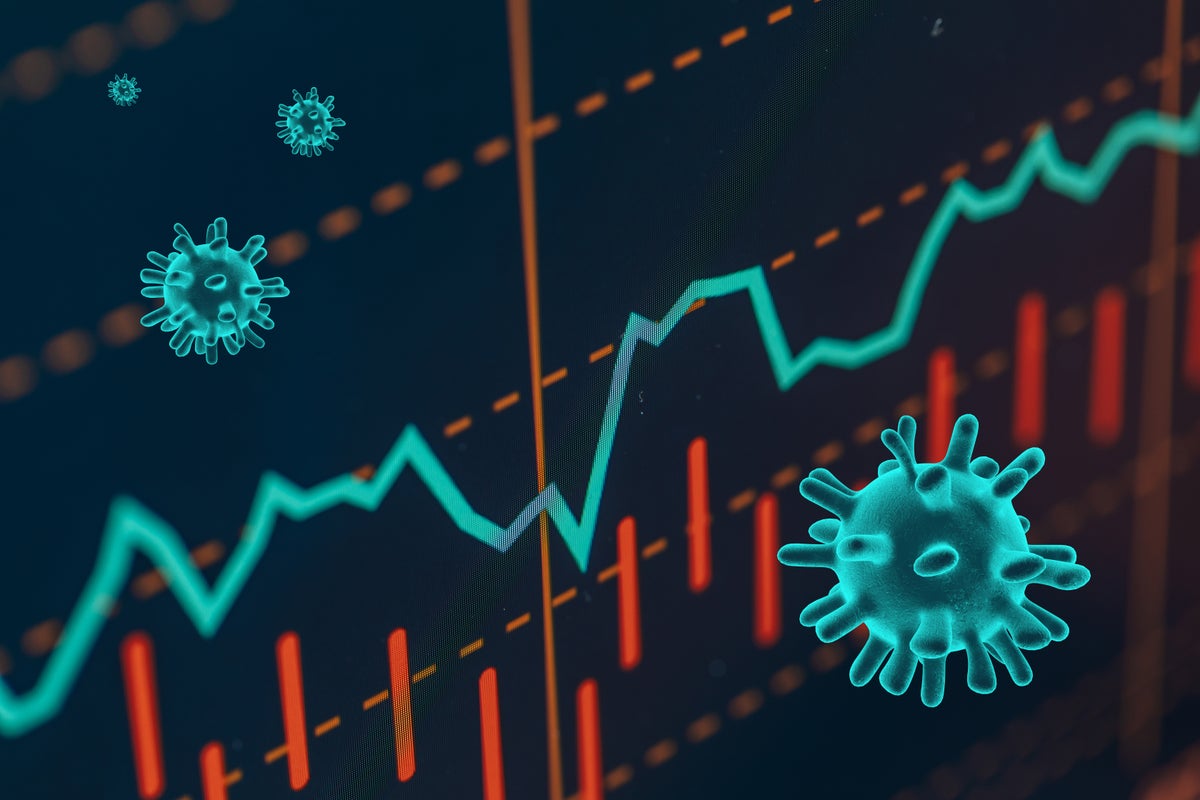 (Monday Market Open) Early Wall Street weakness is likely connected to events 7,000 miles away as hopes of an end to China’s “zero-COVID” policy keep getting dashed. Lately, it feels like each time there’s optimism of China loosening restrictions and helping recharge global growth, it quickly fades. That appears to be the case this morning as news of increased deaths and fresh lockdowns came in over the weekend.

China’s struggles might be helping the U.S. dollar, which is showing some strength this morning. Keep an eye on that, because the dollar’s recent descent was a key factor in the U.S. rally.  Between China and the dollar, sentiment weakened amid fears the market could face a double-whammy.

The outlier so far is Walt Disney DIS, which soared 9% in premarket trading today after a surprise leadership change (see more below).

This week brings a host of data ahead of Thursday’s Thanksgiving holiday, all of it crammed into Wednesday. It’s capped by Federal Reserve meeting minutes, which investors may want to review closely to see how the Fed views inflation progress and to see how 2023 policy may shape up

Bonds were back in business last week as investors reacted to recent data showing inflation leveling off a bit. Taxable bond funds took in new money for the first week in the last nine for the week ended November 16, Refinitiv said.

Investors also piled into municipal bond funds. Current yields, while still well below year-over-year inflation for the benchmark TNX, might seem attractive to investors trying to catch their breath after so much stock market turmoil in 2022.

The bond market might get another boost from Atlanta Fed President Raphael Bostic, who said Saturday he’s ready to “move away” from three-quarter point rate hikes at the Fed’s December meeting. He also feels the Fed’s target rate needs to rise only another percentage point to tame inflation, Reuters reported. That was the Fed-speak equivalent of a 180 from St. Louis Fed President Jim Bullard, who spooked the market last week and sent yields rocketing with talk that a peak rate of 7% might be necessary in a worst-case inflation scenario, up from the current range between 3.75% and 4%.

What About Bob? Walt Disney (DIS) shares soared 9% this morning after the company announced the return of Bob Iger as chief executive, replacing Bob Chapek. Iger should know the job well after 15 years in that seat. Chapek joined in February 2020 and shares have fallen nearly 20% since then. Will Iger’s return right the ship? DIS said Iger is “uniquely situated” to lead DIS “through this pivotal period.” While DIS has been struggling and the last round of earnings brought some frustration, few had expected anything this drastic. There’s initially some optimism but we’ll see how it plays out as far as any changes in strategy or direction.

We’ll keep a close watch on WTI Crude oil futures (/CL) today and the rest of this week after front-month prices fell below $80 per barrel Friday for the first time since late September. Seasonally, this is when crude tends to weaken, and China’s COVID lockdowns also are weighing. That’s showing up in a futures market that’s now in contango, with the January contract at a premium to the December contract, something not seen in some time.

One question is whether crude might rebound ahead of the next OPEC and non-OPEC allies meeting, scheduled for December 4. Last time OPEC met, it cut production, and this could be the week when pre-OPEC production talk starts making headlines. The S&P 500 Energy Sector Index (IXE) fell more than 1% Friday, making it the worst-sector performer of the day. Last week was the first week in the red for the IXE since early October.

Judging by Q3 company earnings calls, recession odds may be falling. The number of S&P 500 companies citing “recession” during those calls fell to 179 in Q3 from 242 in Q2, according to research firm FactSet. That’s with 94% of S&P companies now finished with reporting. A year ago, only 15 S&P 500 companies expressed recession worries on their earnings calls, and 179 is the third highest in the last 20 quarters.

Financials, industrials, and real estate companies had executives most likely to cite recession in Q3. Utilities, energy, and communication services were the least likely to utter the R-word on their calls.

In other findings from FactSet’s weekly report Friday, 69% of S&P 500 companies beat Wall Street’s Q3 earnings per share (EPS) estimates, and 71% beat consensus on revenue. Those “surprise” levels for EPS are below the five- and 10-year averages and are beating estimates by far less. Average net profit margin is about … well, average, at 11.9% but down from 12.9% a year ago. Blended EPS is expected to rise 2.2% in Q3, the lightest quarterly growth in two years.

Also coming down are analysts’ estimates for Q4 earnings growth. The average estimate is now for a decline of 2.1%, according to FactSet. However, analysts expect earnings growth to return in Q1 with a 1.6% gain. Keep in mind that lately, quarterly earnings estimates have trended lower. That could easily be the case for Q4 and Q1 as well, which might raise questions about the current S&P 500 forward price-earnings ratio of 17.2. Remember, if “E” falls, “P” could begin to look pricey. There’s a little Monday cheer for you.

Stocks continued to look resilient Friday after a midweek dip. Friday marked the second day in a row where major indexes rebounded from intraday softness. Still, it’s worth noting that the sectors doing best on Friday were defensive ones like utilities, real estate, and health care. This implies less of a “risk-on” trading sentiment than we saw, say, a week ago.

Info tech, which is up 12% over the last month, barely climbed Friday but was one of a handful of sectors that finished higher during a down week for the overall S&P 500® index (SPX).

Talking Technicals: The number to watch on any rallies this week in the SPX could be 4,028. That’s the peak we saw two weeks ago after the sharp Consumer Price Index (CPI) rally and now may be a resistance point. The 200-day moving average was just above that as of Friday at 4,067.

CHART OF THE DAY: The S&P 500 Financials Sector Index (IXM—candlesticks) turned on the afterburners after many big banks reported solid Q3 earnings last month. At that time, the climbing 10-year Treasury yield (TNX—purple line) didn’t hurt the financials sector either. However, as rates cooled recently, so did the sector, signaling possible economic weakness ahead. One worry is that the Fed’s recent hawkishness might send the economy into recession. Lower rates at this juncture might reflect recession worries, and that’s not good for Financials. Data sources: S&P Dow Jones Indices, Cboe®. Chart source: The thinkorswim® platform. For illustrative purposes only. Past performance does not guarantee future results.

Drop the Mic—Please: This week’s Fed calendar lists far fewer Fed speakers, which has to be a welcomed break for the market after so many headlines last week. However, several are scheduled tomorrow, and, as mentioned, minutes from the last FOMC meeting Wednesday could add some volatility. Like a Fed speech, FOMC minutes can reveal market-moving information, so stay on your toes. We saw that last week’s Fed speakers generally stayed on the same hawkish page, dashing hopes of any near-term pivot and in one case even causing worry that the Fed might be contemplating a higher “terminal,” or peak rate, in 2023. Notably, the most predictably hawkish tone came from St. Louis Fed President Jim Bullard. He’s just one member of the FOMC and doesn’t speak for everyone there, but he wasn’t completely alone in his views. FOMC minutes aside, any investors hoping for a “pause” in rate hikes anytime soon might be disappointed based on what Bullard and others said last week.

Registers Still Ringing? As mentioned above, we’re not done with retail earnings yet. Another slew of reports is due tomorrow. Best Buy (BBY) might be an interesting one to watch, partly because its business is focused on expensive consumer products. While appliance prices haven’t been leading the inflation charge higher this year (food and energy have been huge contributors, but they’re not sold by BBY), there’ve been signs of middle-income consumers pulling back on discretionary purchases. Computers, phones, televisions, and other BBY products could suffer from that. It’s also going to be interesting to hear what BBY says about the coming holiday season. Retailers have been all over the place with their predictions, but two that cater to middle-income shoppers, Target (TGT) and Kohl’s (KSS), expressed concern about holiday shopping demand. If shoppers at TGT and KSS cut back on their apparel purchases as prices of essential things rose, perhaps BBY customers decided to wait on replacing their phones.

Spotlight Stock—Zoom Video: Remember back in the early days of the pandemic when “stay-at-home” stocks dominated the headlines and made big Wall Street gains? That’s so 2020. Now, companies like Zoom Video (ZM) face huge obstacles to growth. ZM is down 55% year to date and is expected to report results Monday after the close. Its shares rebounded slightly over the last month, rallying almost 17%, possibly reflecting generally higher “risk-on” sentiment as some uncertainty from earnings and the midterm elections got squeezed out of the market.

At “Zoomtopia 2022,” ZM outlined initiatives it’s taken to stay relevant as the world has reopened, including virtual coaching for sales teams, connected workstreams, coworking options, and better integration of its Zoom Mail and Zoom Calendar. Will this please investors? The financials may mean more. In its previous quarter, ZM revenue growth continued to slow, though EPS slightly beat Wall Street’s estimates. Analysts expect a steep drop in FY Q3 EPS from a year ago. Keep an eye on enterprise customer growth when ZM reports. Last time, it rose less than 3% sequentially. That’s the kind of customer who can potentially drive future profit.