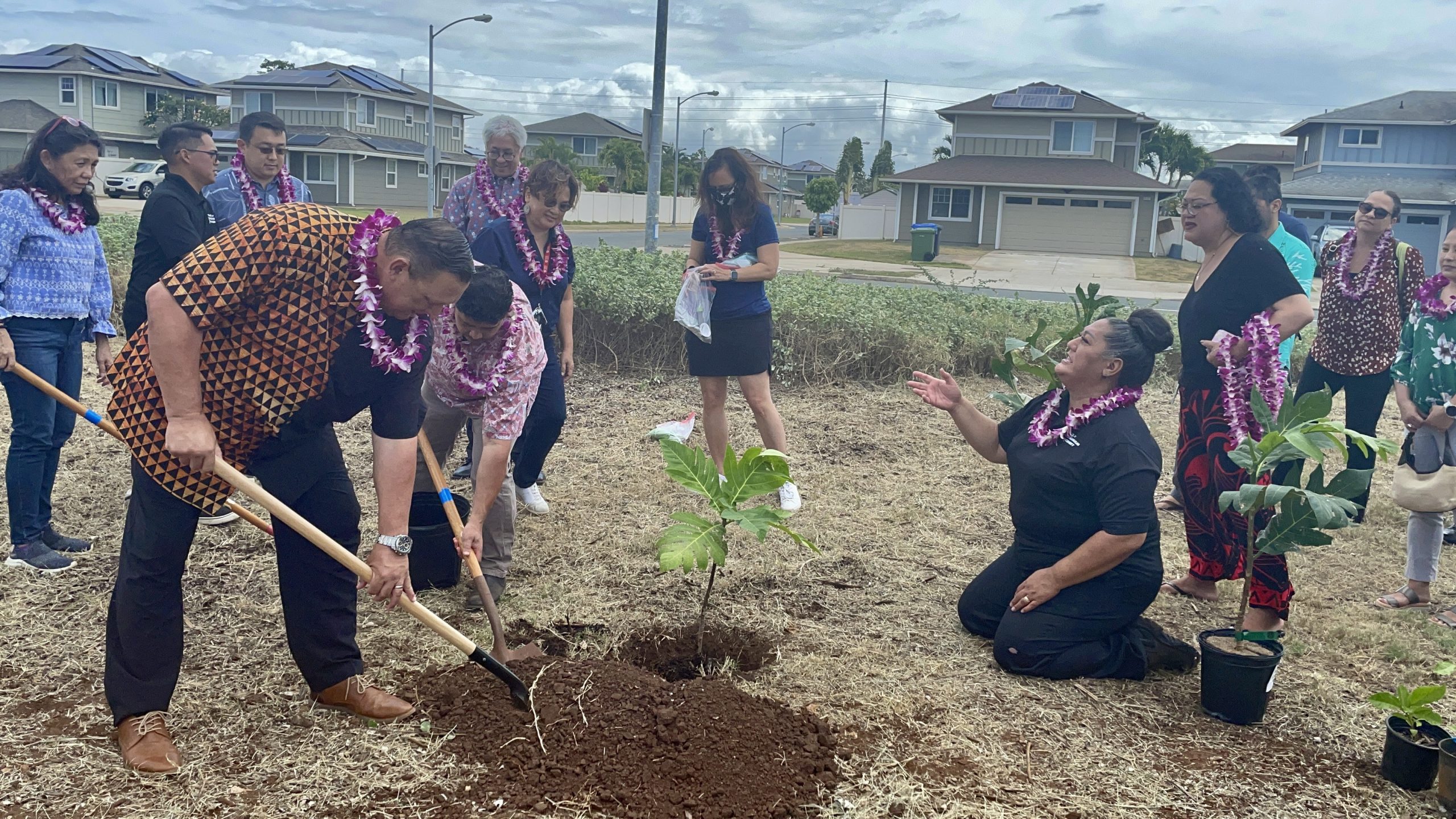 When Dr. Susan Mercado accompanied her adolescent son from the Philippines to Hawaii in late 2020, she noticed a vacancy for a food systems and resiliency director at the Hawaii Public Health Institute. A former undersecretary of the Philippine health department with decades of experience as a medical doctor and public health expert, she got the job.

This April, under Mercado’s leadership, HIPHI formed the Food Garden Hui. The informal collective, in partnership with the Council For Native Hawaiian Advancement, empowers and enables community-based solutions for increasing access to healthy, sustainable and free food throughout the islands through home and community gardening.

The hui also has support from the Philippine Consulate and the Hawaiian chapter of the Knights of Rizal, a group honoring the principles of Philippine national hero Jose Rizal.

The hui’s quick launch was made possible by the galvanization of initiatives that had been simmering for years and bubbled over when the first wave of the coronavirus pandemic in March 2020 exposed the severity of the islands’ vulnerabilities to food insecurity.

HIPHI and other stakeholders were alarmed at the extent to which older adults comprising about a fifth of the state’s population were already having trouble accessing food because they were housebound, lacked income or had no computer with which to apply for food stamps or other assistance even if they qualified for the benefits.

The classic model of food donation and distribution could feed the hungry during an emergency — at the height of its operations, HIPHI was delivering 1.2 million meals to 8,000 kupuna each week. But this aid was not sustainable, with the University of Hawaii Center on Aging estimating that approximately 16% of those aged 65 and above are affected by food insecurity.

A $40 million U.S. Department of Agriculture grant in 2021 funding a statewide effort spearheaded by UH West Oahu and Kamehameha Schools to make food systems stronger and more equitable further convinced HIPHI that somebody needed to oversee many overlapping projects aimed at providing equitable access to dependable sources of healthy nourishment.

In addition to focusing on how to secure longer-term food access, HIPHI began planning how to address the nutritional needs of all demographics in Hawaii, especially those of developing children, Native Hawaiians, Pacific Islanders and people living in poverty.

HIPHI estimates that 40% of people in Hawaii suffer from food-system related diseases such as diabetes and hypertension from eating too much processed food and having too little access to fruits and vegetables as well as sedentary lifestyles.

A pre-pandemic study by the University of Hawaii showed that 30% of hospitalized youth in the islands are obese. The figure is markedly worse now.

After witnessing and tackling the extremes of poverty, overpopulation, hunger and malnutrition in the Philippines, Mercado had hope for Hawaii’s situation.

One of the first things she did in her role was to create opportunities for dialogue on food systems and public health. In March, she organized an online “talk story” hosted by the Hawaii Philippines Business And Economic Council between food resiliency workers with diverse affiliations in Hawaii and Dr. Fermin Adriano, then-undersecretary of the Philippine Department of Agriculture.

Officials and community members from the Philippines and Hawaii participated in the meeting, which focused on the need to lessen the state’s vulnerability to swings in food supply and prices amid the pandemic, climate change and the ever-looming possibility of the impacts from war brought to mind by Russia’s invasion of Ukraine.

When Adriano mentioned that the Philippine government was providing seedlings to people with the idea that they would be more likely to start a garden with them, Dexter Kishida, program manager of Honolulu’s food security and resiliency initiatives, saw this as an approach that could work in Hawaii. So did HIPHI.

The Food Garden Hui was launched on April 22, coinciding with Earth Day. Members of the participating groups broke ground for a garden at the Council for Native Hawaiian Advancement headquarters in Kapolei. Honolulu City Councilman Augie Tulba, a Filipino American, captured the event on video to post on social media.

Tulba said his own father grew vegetables like eggplant, moringa and bitter melon leaf at home.

“I want to enable and encourage anyone who can, to grow their own produce, whether in their property or in a community garden,” he said in a statement.

Connecting With The Land

“Hawaii used to have a food secure, self-sustaining system,” she said. “It’s the most isolated place on Earth, so, there was ancient, Indigenous knowledge about how to survive without destroying the environment. But the generation today, they don’t know this. All they know is they go to Costco and they go to wherever and they buy the food. So when the prices increase, what do you do next? What you do next is you plant what you can eat.”

The Food Garden Hui is one of the latest efforts to help Hawaii grow healthy food locally since the state currently imports over 80% of its food.

The nascent endeavor is exploring opportunities to bring together people who want to take action by putting plants in the ground without waiting for policies or governmental funding to trickle down.

Another initiative sponsored by HIPHI is the Farm To School Hui, not to be confused with the state’s farm-to-school program aiming to make sure that at least 30% of food served in public schools is from local sources by 2030.

Rufino Magliba, Community Relations Specialist for the Council For Native Hawaiian Advancement and also a Filipino American, explains the goal of the Food Garden Hui.

Vinnerie Conner, 16, a new member of the council and a junior at Kea’au High School on Hawaii island, grew up poor with a single mother in the Philippines in Davao City, Mindanao.

Conner, her mother and her grandmother grew spinach, taro, and star fruit to supplement humble meals of rice, soy sauce and fish. In the absence of toys or technology, the little girl reveled in the dirt, getting used to the smells emanating from a nearby durian tree in what is known as the durian capital of the Philippines.

She fondly remembers the sense of achievement and happiness she felt when she was 5 years old and managed to grow tomatoes from seeds planted out of the fruit.

When Conner’s mother met an American man and married him, they moved to a 35th floor apartment in Honolulu with no way to farm. She began trying fast food and processed meals, which she found bland and oversalted compared to the fresh ingredients and flavorful cuisine of the southern Philippines.

In 2016, her stepfather, close to retirement from the Navy, moved the family to Hawaii island, putting Conner back in a rural environment. They lived in a house surrounded by what the family nicknamed the “fairy garden” because of the gnome statues punctuating the ferns, ginger roots, orchids, jasmine flowers, and orange trees. She tried to grow some food but felt off-kilter in the cool, mountainous climate that was so different from that of her old home in Davao City.

She jumped at the chance to join the Hawaii Youth Food Council.

“I wanted to get back on it and feel that things that I used to feel during my childhood,” she said. “I really hope that we would educate people about farming. And what we’ve already been doing is giving back to the land and preserving the land.”

‘Just Stick It In The Soil’

Mercado believes that the enthusiasm of the multigenerational Filipino contingent championing food gardens in Hawaii is because home growing is ingrained into Filipino culture, even in urban environments.

She remembers learning to plant from her grandmother, who told her to “just stick it in the soil” when she was a child. And like many other children then and now, she learned “Bahay Kubo,” a popular folk song whose lyrics cite the range of produce that can grow outside a humble, stilted hut.

“All the things that you eat, you grow it around your house. And that’s a song we learned as children”

The Food Garden Hui administrators have started small, with a little land, water, the power of volunteers and in-kind donations of seedlings, greens and tools from enthusiastic community members. But the group plans to launch a fundraiser next April.

So far, the hui has planted calamansi trees at the Philippine Consulate and distributed greens donated by growers or raised at community gardens in Kapolei on the first Saturday of every month at Princess Ruth Ke’elikolani Middle School. The giveaways have been so popular that the gardens have been completely emptied of their harvests and are in the process of regenerating crops like water spinach.

The hui also has distributed 1,000 units of seed packs and seedlings toward the goal of fostering 1,000 sustainable food gardens in homes.

Like the Farm to School hui, the food garden partnership is trying to help younger generations reconnect with the land and learn how to live off of it.

This year, the Food Garden Hui handed out 500 seedlings at the Turkey Trot Health Fair at Moanalua High School before Thanksgiving weekend. When organizers ran out of containers for the seedlings, a supporter gave them money to buy more.

Hundreds of students streamed down from the benches to the numerous health-related booths set up around the track and field. Filipino students visiting the hui’s booth mentioned that they had an auntie or grandparent who would appreciate a mung bean or a sweet potato plant.

Dr. Susan Mercado introduces a few of the 500 seedlings being distributed at a health fair at Moanalua High School.

Meanwhile, the partnership has helped some people without computers to apply for a windfall of home garden funding that already exists, such as the $5,000 USDA Micro-Grant Program For Small-Scale Agriculture.

More than 170 people won grants last year, the first year of fund disbursal. This time, the Hawaii Department of Agriculture administering the awards has received 7,000 applicants for a total of $3 million in available funds.

Back in the Philippines, which has 113 million people to Hawaii’s 1.4 million and over 7,000 islands to Hawaii’s eight, Dr. Mario “Doc Mar” Capanzana, who recently retired as director of the government’s Food And Nutrition Research Institute, said a similar “edible gardens” initiative has taking root in his country.

A project his department launched in 2010 called “Oh My Gulay!” or, “Oh, My Vegetable,” tested a government-designed model for a workplace garden in public-private partnership with a seed provider.

Ten years later, the 13-foot by 49-foot garden of herbs, seasonal goodies such as eggplant and squash still exists, along with aquaponic tanks of tilapia.

“It’s not a big garden, but showcasing that it’s possible, even in the heart of the city,” Capanzana said.

What started as an experiment to generate additional income turned into a fallback supply of fresh food and training opportunities when the pandemic disrupted food imports. The setup has been replicated at a few other regional offices.

And, though difficult to enforce or track, a mandate for gardens in public schools has been adopted by the Philippine Department of Education in a national effort to prevent malnutrition.

Doc Mar points to himself as an example of the positive effect of home gardens. After learning how to grow food at work, he began growing lettuce, tomatoes and okra at home.

“It really helps,” he said, adding, “Right now, vegetables are so expensive.”

Hawaii Grown“ is funded in part by grants from the Stupski Foundation, Ulupono Fund at the Hawaii Community Foundation and the Frost Family Foundation.

Sign up for our FREE morning newsletter and face each day more informed.