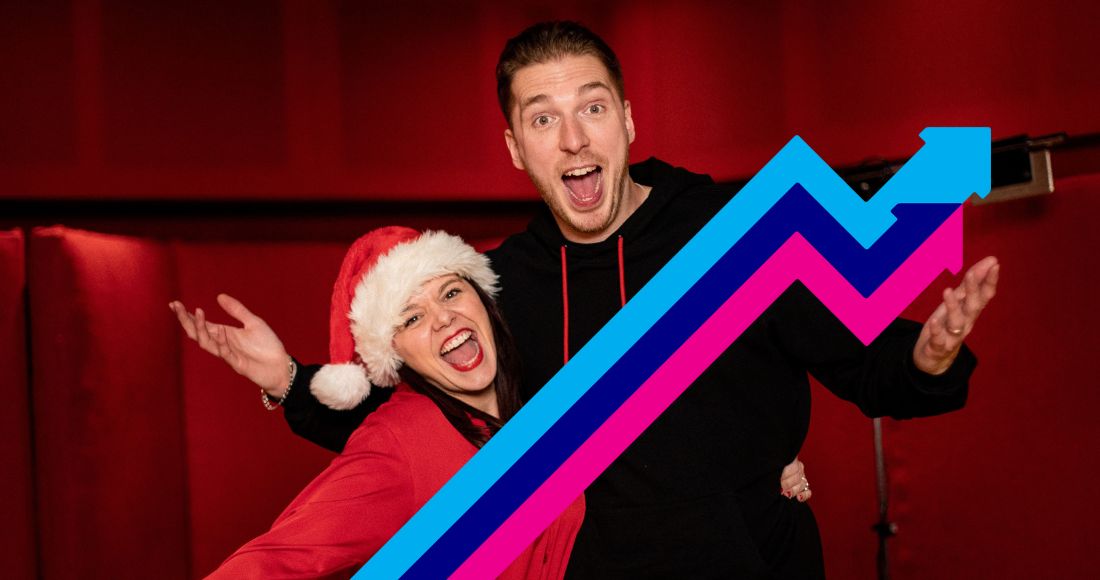 LadBaby’s Food Aid ascends to Number 1 on the Official Trending Chart as they battle for a record-breaking fifth Christmas Number 1 single.

This year, Mark and Roxanne Hoyle have teamed up with Money Saving Expert and daytime TV staple Martin Lewis for Food Aid, a cover of Band Aid’s beloved 1984 smash Do They Know It’s Christmas? (which was, of course, that year’s Christmas Number 1 – beating Wham!’s Last Christmas to the top spot).

Food Aid is currently leading the pack to debut at Number 1 this Friday – but it will be an uphill battle for LadBaby to overcome the streaming might of Christmas classics Last Christmas and All I Want For Christmas Is You in the coming days, with both tracks gaining daily and now in with a shot of claiming Christmas Number 1 for the first time ever.

Profits from the single will be split equally between UK foodbank charity The Trussell Trust, of whom LadBaby are patrons, and Band Aid.

Last year, LadBaby smashed a UK chart record when they became the first act in Official Charts history to score four consecutive Christmas Number 1 singles. As it stands they share the record for the most Christmas Number 1s of all time with The Beatles (who scored four non-consecutively in the 1960s).

MORE: The contenders for the Official Christmas 2022 Number 1

Elsewhere on the Official Trending chart this week, we have big movers from Lizzo’s Amazon Music Original cover of Stevie Wonder’s Someday At Christmas (which could enter the Top 10 for the first time), Youtube supergroup Sidemen and rapper JME with Christmas Drillings, Eurovision hero Sam Ryder’s cover of Jingle Bells (another Amazon Music Original), as is Tamil-Swiss singer-songwriter Priya Ragu’s take on Brenda Lee’s Rockin’ Around The Christmas Tree.

Listen to the Official Trending Chart on Spotify below. Also listen on Deezer | Apple Music.

Further down, we have new entries from Central Cee (Let Go), The K**ts (F**k The Tories), Zoe Wees (All I Want For Christmas), the late Juice Wrld (Face 2 Face), Lauren Spencer-Smith (Last Christmas), Kawali (Let It Rip), Thxsomch (Spit In My Face) and iShowSpeed (World Cup).