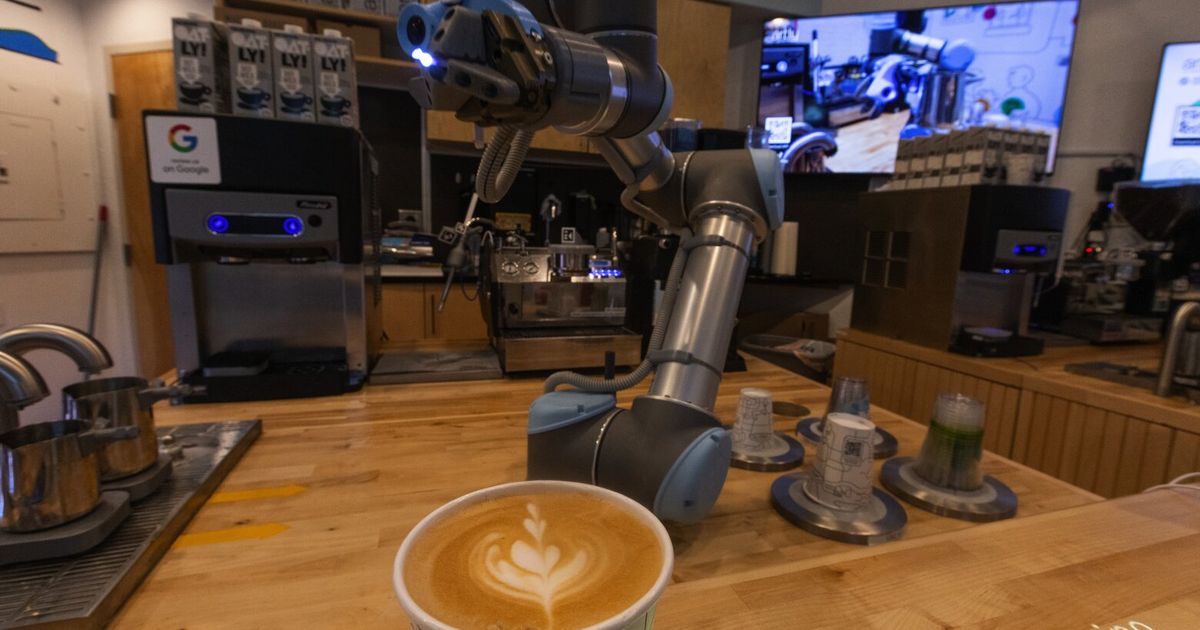 Jarvis moves slowly, yet meticulously, from one station to another to make a cup of cappuccino. Jarvis makes the espresso, pours the milk, steams the foam and puts it all together, topping it off with a carefully drawn foam leaf.

The result is a cup of cappuccino, ready to go.

What stands out about this cappuccino? Its maker. Jarvis is a robotic arm, not a human barista, at Artly in Pike Place Market.

While Jarvis is busy, a human staff focuses on interacting with customers, explaining the concept to newcomers and placing orders using a tablet.

Seattle-based robotic startup Artly, founded in 2020, has seven locations in Washington, Oregon and California. The highlight at each location is a unique barista bot that has its own name, gender, voice, accent and personality. The robot’s techniques differ at each location as they learn from a different human barista.

It is intriguing to see the robot’s coffee-making techniques, but pressing market needs were behind the innovation. Cost concerns and high employee turnover in food services have led Artly and others to provide automated solutions to restaurants and businesses, even before the pandemic hit and brought additional challenges.

Just a couple of years into operation, Artly CEO Meng Wang said the company has maintained healthy operating margins — the profit a company makes after paying for costs of production — by eliminating the biggest expense in food business: labor.

For a coffee shop that would need two or three baristas, Artly needs one staffer, in addition to a barista bot like Jarvis. Artly reinvests the money it saves from labor into sourcing more quality coffee, Wang said.

Artly isn’t alone in introducing robot help in food preparation. Another Seattle-based startup, Picnic, offers automation solutions for a staple of the American diet: pizza. Its food prep station can produce up to 100 pizzas in one hour using metered toppings.

Since Picnic was founded in 2016, its robots have assembled pizzas in many places, including Seattle’s T-Mobile Park and the Las Vegas Convention Center. The company has seen a growing interest in its robots. This summer, Picnic announced partnerships with pizzeria Moto’s West Seattle location and a Domino’s store in Berlin.

The startups behind these robots tout their automated solutions for bringing higher productivity and reducing costs. Automating pizza assembly can help restaurants reduce food waste and potentially save money, said Picnic CEO Clayton Wood. For example, it helps keep the amount of toppings even.

By automating the process with preset topping amounts, pizza-making can be more cost-effective, Wood said.

Automated solutions also fill a gap in finding and retaining workers. Food service jobs can be “tedious and can be dangerous, and there’s very high turnover,” Wood said. “There’s no advancement and the working conditions are not great.”

Issues in productivity and turnover in the food industry predate COVID-19, said Geoff Harris, a Picnic investor and co-founder and managing partner of venture capital firm Flying Fish Partners. But the need grew with the pandemic as restaurants closed. Many employees were laid off or furloughed and did not go back to the food industry.

Staffing levels at eating and drinking establishments remain below their pre-pandemic levels as demand for labor nationally remains high, according to a National Restaurant Association analysis of U.S. Labor of Bureau Statistics data in November.

Robots can’t fill in for humans in every setting, however. Joe Yang, owner of several coffee stores in Portland, who is also Artly’s co-founder and chief coffee officer, experienced that firsthand at his coffee shops.

Yang tested Jarvis’ beta version at his own stores. His customers were initially intrigued and excited about the robot barista, but the service was slower than with a human barista. He said customers craved the connection with the person making their coffee.

“When [customers] go to the coffee shop, their expectation is to be served by a human,” Yang said.

With that, Artly has focused on opening locations in shopping malls and business office buildings rather than standard coffee shops.

Artly also has seen an opportunity to expand in areas lacking coffee shops because of the pandemic or where Starbucks stores closed.

“During COVID-19 there were a lot of ‘coffee deserts,’ and the competition is clearly much less than before,” Wang said.

For example, its first location opened at Japanese retailer MUJI in Portland in May 2021, after a previous coffee operator left due to labor shortages. Similarly, Jarvis made a home at Stoneridge Shopping Center in Pleasanton, California, in December 2021 because there was no coffee operator there.

Because Starbucks had exclusivity as the only coffee provider in some areas, consumers had no other coffee options when it left, CEO Wang said. This was the case in the Stonestown Galleria Shopping Center in San Francisco where Artly opened its location in August.

While the need and opportunities exist, some startups are beginning to feel the squeeze. Inflation and recession fears this year have led to a stock market downturn, dampened investor appetite for risk and led to a decrease in venture capital activity.

“The current investment market is a challenge,” Wood said. “We could go much faster in our product development and our market expansion if we were operating in a different market condition.”

By the end of 2021, investment activity slowed, with fewer initial public offerings and stock market losses. Those factors have “made the VC market significantly more conservative than in the prior several years,” Wood said.

Still, with a modular hardware system, Picnic’s robots are easy and cheap to build, Flying Fish’s Harris said. With a robotics-as-a-service business model, the standard full offering for operators is $4,500 a month on a 36-month contract.

Artly’s CEO Wang said the company hasn’t struggled with funding. It closed a funding round of $8.5 million this year and a $1.5 million round last year. Both rounds were early-stage investments.

Both Picnic and Artly are still young startups. And despite possible economic challenges, both have plans to scale the business.

Picnic has partnered again with Moto to install a food prep station at the pizzeria’s downtown location, though the unveiling date is still unclear. More partnerships are on the horizon, according to Wood and Harris.

At Artly, when the barista bots becomes more stable and reliable in making coffee, Wang said the next step will be franchising, though that goal is still some years ahead. In 2023, the company plans to scale by adding between 15 and 20 locations.