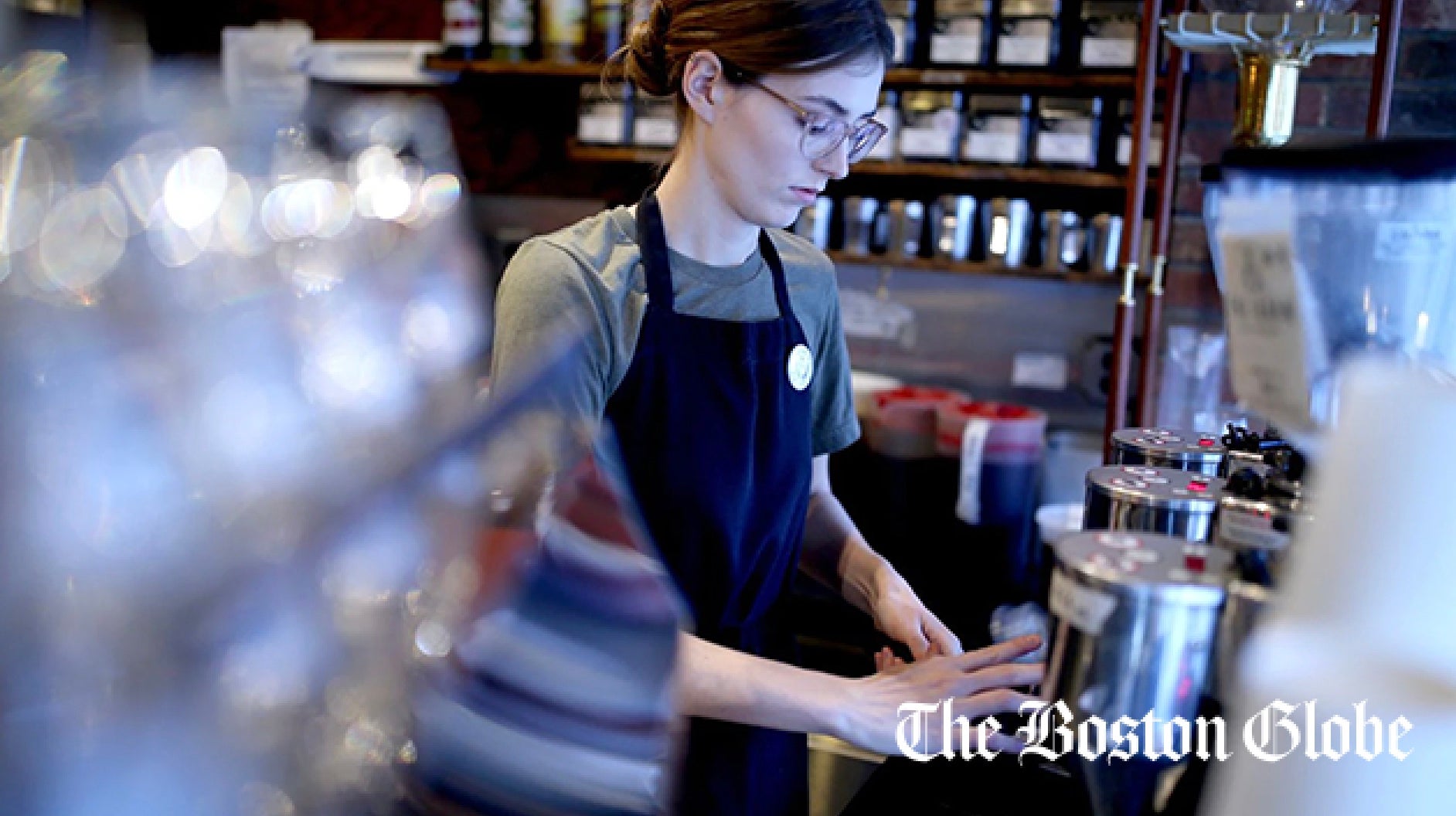 As his employees see it, there are two sides to Steven Darwin, longtime owner of the four Cambridge coffee shops that bore his name.

One sat across from them at the bargaining table, thrashing over the particulars of a union contract for workers — most struggling to get by on $14.25 an hour, plus tips.

The other was a colleague of sorts in the intimate confines of a small business. In the cafes, Darwin saw “his baby,” one barista said, a business he built over 30 years. He was softer, almost sentimental. They would find him in the basement, gazing at a wall crowded with Polaroids of workers from years past.

But as it turned out, there would be no future for Darwin’s.

Fourteen months after nearly 50 employees voted to unionize, Darwin stunned them with an announcement: He was closing the coffee shops altogether before 2023. Workers would be jobless three days before Christmas.

Steven and his wife, Isabel Darwin, did not respond to e-mails from the Globe for comment. But last month, the couple said that a union rally outside their Cambridge home had “resulted in the acceleration of our decision to retire.”

The closure of Darwin’s underscores the stakes as a wave of union efforts sweeps small businesses, where workers are fighting for equal say and owners are grappling with the fallout. Darwin’s is one of six independent coffee houses and delis in the region where employees have organized since summer 2021, including Pavement, 1369, City Feed and Supply, Phinista Cafe, and three Somerville sister shops.

Unlike the high profile labor fight at Starbucks, where chief executive Howard Shultz chastises unionizing workers from his corner office in Seattle, the conflicts at the local chains unfold in the few feet behind the counter. Any distance between employees and management is — physically, at least — non-existent.

At Darwin’s cafes, the owner fixed the espresso machines and constructed shelves where baristas stacked cups. His daughter went to school with one of his shift leaders, Eleanor McCartney.

That closeness, she said, proved tricky for workers.

“Darwin both wanted to be the boss who you got a beer with after work, and the boss who trumps your union. Can you really have both?”

Labor researchers said yes. Customers do not want these beloved cafes to vanish, and the demands of workers and business can align, said Kate Bronfenbrenner, director of labor education research at Cornell University.

“There’s no evidence that unionization harms small businesses,” she added. “It can actually help. It increases morale.”

But talk with people in the middle of it all, and a complicated picture emerges. A dozen employees said unionizing bettered their workplace and allowed for conversations about discipline policies, scheduling, and pay.

By contrast, the owners of five union coffee shops would not comment on the record, with more than one citing the delicate balance inside their stores.

For owners, unionizing can add another financial challenge in a business already full of them, throwing up a barrier to plans to expand hours, for example, or add a one-time raise. Some cannot fathom paying wages in the mid-$20 range.

Among customers, even those who identify as pro-union, there is fear of what will happen if workers and owners cannot make peace.

“I support the [Darwin’s] union, but it’s obvious that it had a big part to play in the closure,” said Wesley Baranowski, a chai latte lover at the Putnam Avenue cafe. “It seems like the owners were near the end of their rope, and this pushed them over the edge. I’m worried about what will be here next. A chain [store]? No one wants that.”

Local coffee shops tend to be progressive spaces, where management encourages workers to identify their pronouns and paste Black Lives Matter stickers. In Massachusetts, Larry Margulies of Pavement Coffee House said he voted for Ralph Nader and Bernie Sanders; Diesel Cafe was among the first retailers to introduce gender-neutral bathrooms in 1999.

So customers may think that liberal owners are always in sync with the interests of workers, said longtime Darwin’s barista Ryan Morrison-McKell, even when that’s not the case.

At the Jamaica Plain grocer City Feed and Supply, many of the 30 employees were shocked when founder David Warner refused to recognize the union, forcing workers to take the matter to a vote. They went so far as to file a complaint with the National Labor Relations Board claiming he mishandled grievances about sexual harassment.

Bronfenbrenner, the Cornell researcher, said founders sometimes clash with workers because they have difficulty ceding power in businesses they built from scratch. The Darwins, for example, were 20-somethings when they opened their first cafe on Mt. Auburn Street, in 1993. Jennifer Park and Tucker Lewis were 21 and 29, respectively, when they opened Diesel Café in Davis Square. Josh Gerber of 1369 inherited the shop from his uncle. And Margulies of Pavement had just graduated from Boston University when he took a job at the Allston bagel shop he would later buy and franchise.

But how owners respond to the union drive can often spell its fate.

Three workers said they felt Darwin decided to close the cafes because he was no longer willing to collaborate with the union. “It was such a headache, but he didn’t work with the union to make it not a headache,” said Morrison-McKell, the barista.

They recall the Darwins had offhandedly mentioning sunsetting the business in a couple years, when they readied for retirement. Then that time came soon and suddenly.

Even among the tight-knit group of workers, there were quarrels. At Darwin’s, multiple employees said that four baristas who were members of the political advocacy group Socialist Alternative were especially aggressive, threatening to strike and demanding wages of as much as $24 an hour.

One of those four, Sam White, disagreed and said the union often came to a consensus and voted overwhelmingly to uphold the $24 demand first in March, and then again in September.

At Diesel Café and Pavement, a willingness to compromise kept similar tensions at bay.

Park, the Diesel co-owner, said in a story on GBH that she was “100% behind” increasing pay transparency when the union first formed last December. And shift runner Chris Duncan said he never viewed the owners as his “corporate overlords.”

“There’s a lot less of a gap between me and the owners,” compared with big chains, he added. “Even though whether you’re working at Diesel or the Starbucks across the street, you’re doing very similar work.”

He did unwittingly antagonize workers in a 2021 Globe article, where he said the union was driven by social issues, rather than economics. Workers mockingly made pins emblazoned with his quote: “I’m a good boss.”

But Margulies signaled kinship in a June 2021 op-ed he penned for GBH: “If I was 21 years old, I’m not so sure I wouldn’t have signed that union card myself.”

The end result? The union first proposed a 60 percent raise; Margulies countered with 13. They landed at 6 percent.

In the aftermath, Emma Delaney, a former Pavement supervisor and organizer for the UNITE HERE union, stopped by the Fenway store for a cup of coffee in November. She had argued with Margulies over raises and nondiscrimination policies; they were not friends, but had been colleagues once.

Margulies came to fiddle with the menu, met eyes with Delaney, and sighed.

They nodded at each other in a show of respect.

In some ways, workers’ calls for better pay are colliding with a brutal period for restaurants.

Coffee shops are a low-margin business in the best of times, with profits of between 3 to 7 percent, according to the Specialty Coffee Association. Now inflation, widespread labor shortages, and the lingering effects of a pandemic have fueled owners’ fears for the bottom line. Can they survive a wage increase, they wonder? Or a labor lawyer, with legal bills in the thousands?

Many employees are eager to keep up the fight; a few from Darwin’s hope to unionize other businesses. But the closing still raises concern, said Theodora Skedas, executive director of the small business coalition Cambridge Local First. Four coffee shops are gone. Dozens of baristas are out of work, with little but two weeks of severance to pay the bills.

The news also pinpoints a gloomy reality of American entrepreneurship: According to the employee ownership nonprofit Project Equity, baby boomers own the vast majority of small businesses nationwide, and six of 10 intend to sell in the near future, most with no succession plan in place — a phenomenon dubbed the “silver tsunami.”

As closing day at Darwin’s approached, some baristas wondered: Could the couple sell the cafes and let the workers keep their jobs? What about an employee ownership model? It wasn’t up for discussion. (They dreamt of creating a co-op and started a GoFundMe this week.)

On Thursday, the chain shuttered, and several workers recalled the founder’s now apocryphal words: “There is no Darwin’s without Steve Darwin.”

And so there won’t be.