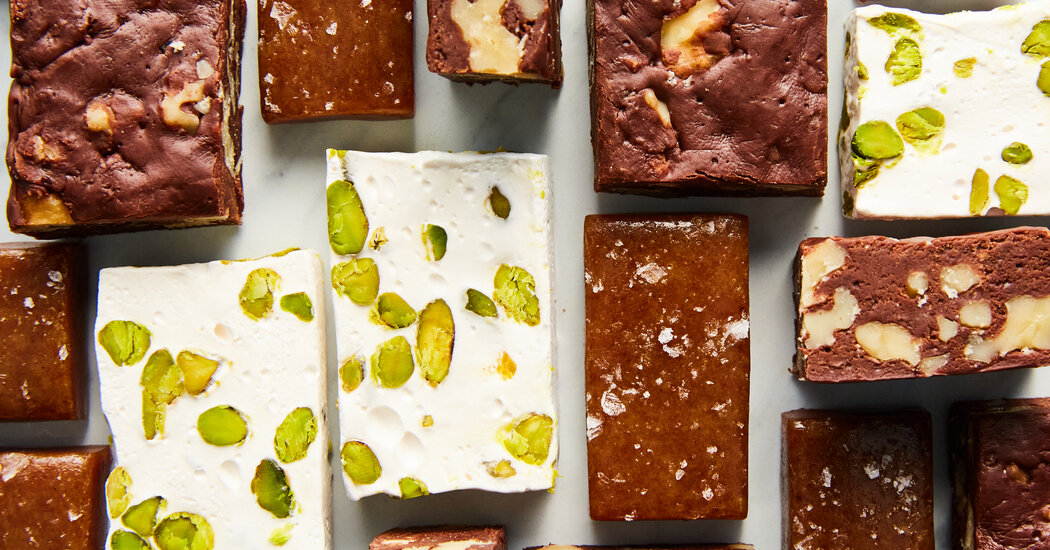 I won’t sugarcoat it: Making candy is tricky.

Of all the pastry arts, confectionery, the art of making sugar-based sweets, is an especially finicky category. But if you have the will and the ambition, not to mention the sweet tooth, to try, you’ll be rewarded with sweets that feel like sorcery in the kitchen.

Because candy is eminently giftable and winter’s drier air makes it a more favorable time to make it, the holidays present a great opportunity for first-time confectioners. The three recipes below are an especially good place to start exploring, as they offer a variety of styles, flavors, textures and techniques.

Before you begin, you’ll need a candy thermometer, which is essential for accurate temperature readings. (To make sure it’s calibrated correctly, place it in boiling water: It should read 212 degrees.) You’ll also want to use a heavy saucepan with thick walls, which will promote even cooking and protect against scorching, as well as a kitchen scale to precisely measure your ingredients.

The Finer Points of Fudge

The properties of sucrose, the chemical name for sugar, are central to candy making: You’re managing many of its attributes, but specifically, its tendency to crystallize.

Fudge, for example, is a crystalline candy, meaning that the sugar is encouraged to crystallize as the mixture cools. First, though, sugar, milk, cocoa powder, corn syrup and honey are cooked together to a stage known as “soft ball.” The temperature range for a soft ball consistency is 235 degrees to 239 degrees. And, while you should use a thermometer, there’s another test: Dribble some of the mixture into cold water, let it cool for a second or two, then fish it out and roll it between your fingers. It should form a malleable ball that holds its shape but flattens easily when pressed (hence the name!).

Once the mixture reaches this soft ball stage, it’s transferred to a bowl, where unsweetened chocolate and butter are added. The mixture is left to cool before it’s agitated with a hand mixer, which initiates crystallization. The agitation breaks up the sugar crystals into tiny particles so they dissolve on the tongue, resulting in fudge that’s creamy, not grainy. Too much agitation will make the fudge crumbly, so pay attention as you’re beating the mixture and stop when it loses its sheen. The change can be subtle, so if you’re not sure, mix less rather than more.

Chewy caramels, alternatively, are noncrystalline candies, meaning the sugar is prevented from recrystallizing as it cooks, yielding a smooth consistency. Their two-step process starts with cooking the sugar to a deep amber color, so it develops complex, bittersweet flavors (the darker the color, the less sweet the candies). During this step, you’ll want to avoid stirring the mixture and wipe down the sides of the saucepan with a wet pastry brush to dissolve any sugar crystals, which could initiate crystallization. The inclusion of corn syrup, a functional ingredient in candy making, is intentional and necessary: It contains mostly glucose, a common ingredient in noncrystalline candies, for its crystallization-inhibiting properties. Don’t omit it (from this or any other candy recipe where it appears).

Once you’ve cooked a dark caramel, cream and butter are added to halt the cooking. (I infuse the cream with coffee, which, though optional, further counters the sweetness.) Then it’s cooked again to a temperature between medium-ball stage and firm-ball stage, depending on how you like your caramels: 250 degrees results in softer, slightly oozier caramels, while 255 degrees results in firmer, chewier caramels. It’s up to you.

Nougat falls into a third category known as aerated confections, which are made with whipped egg whites. You’ll need a stand mixer to work air into the nougat for two reasons. First, it requires quite a bit of power. But you’ll also want your hands to be free, since you’ll need to stream two different cooked sugar mixtures into the egg whites in quick succession. Because the timing can be tricky, make sure you’re organized and pay close attention to the recipe.

Honey is the primary flavor of nougat, and because honey’s flavor degrades at high temperatures, it’s cooked separately from the sugar syrup and added to the egg whites first.

After the sugar syrup is added and the nougat is fully whipped, a small quantity of fat is added, which tenderizes it, followed by lots of toasted pistachios, which offset the intense sweetness (nougat tends to be very sweet). I also keep the proportion of sugar relatively low, which results in a softer, more marshmallowy nougat. It can be a bit sticky when slicing, so I recommend chilling the nougat beforehand and using an oiled knife.

Wrap the finished candies in squares of wax paper or foil candy wrappers, then pack into tins, boxes or jars. (Fudge, in particular, has a tendency to dry out, so make sure it’s wrapped airtight.) Finally, gift them to friends and family, who will think you’ve worked magic.