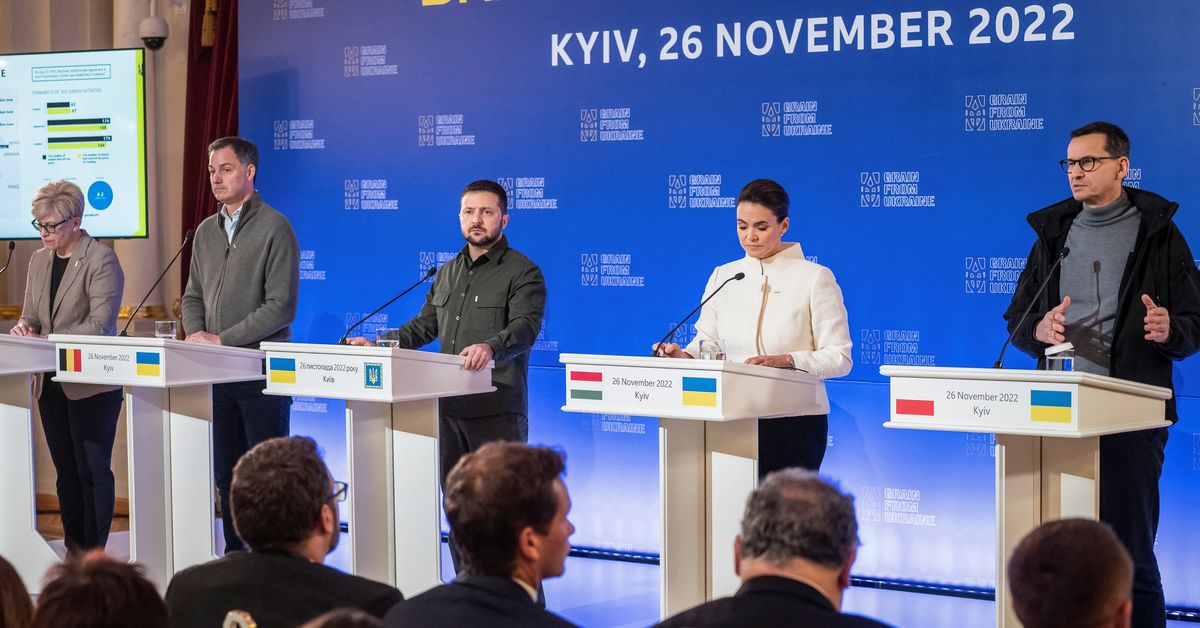 KYIV, Nov 26 (Reuters) – Ukrainian President Volodymyr Zelenskiy hosted a summit in Kyiv with allied nations on Saturday to launch a plan to export $150 million worth of grain to countries most vulnerable to famine and drought.

The “Grain from Ukraine” initiative demonstrated global food security was “not just empty words” for Kyiv, he said.

The Kremlin says food exported from Ukraine’s Black Sea ports under a U.N.-brokered plan has not been reaching the most vulnerable countries.

Zelenskiy said Kyiv had raised $150 million from more than 20 countries and the European Union to export grain to countries including Ethiopia, Sudan, South Sudan, Somalia and Yemen.

“We plan to send at least 60 vessels from Ukrainian ports to countries that most face the threat of famine and drought,” Zelenskiy told the gathering.

The summit was attended in-person by the prime ministers of Belgium, Poland and Lithuania and the president of Hungary. Germany and France’s presidents and the head of the European Commission delivered speeches by video.

A joint statement issued after the summit said that since Russia’s Feb. 24 invasion of Ukraine, the world had received 10 million tons fewer agricultural products than in the same period in 2021.

“This means that the food security of millions of people around the world is seriously threatened,” it said, blaming a Russian blockade of Ukrainian ports earlier in the conflict.

“We are convinced that we will jointly overcome the grave humanitarian and economic consequences of the global food crisis caused by Russia’s aggressive war against Ukraine,” it said.

The gathering coincided with Ukraine’s annual memorial day for Holodomor, the man-made Stalin-era famine that killed millions of Ukrainians in the winter of 1932-33.

In a video address, French President Emmanuel Macron announced a contribution of 6 million euros ($6.24 million) for the transport and distribution by the World Food Programme of Ukrainian grain to Yemen and Sudan.

“The most vulnerable countries must not pay the price of a war they did not want,” he said.