OK, maybe “happy” is a tall order given the current political climate and, well, the actual climate. But “new” is achievable, and you can find it on a dinner table if you look in the right place.

Such thoughts recently led me to Hilliard, where I dined at Off Center: Patio & Pub. Although about a year old, the restaurant was new to me and so was its style of cuisine: vegan-leaning, all-vegetarian Puerto Rican food.

With that culinary approach, Off Center seems appropriately named — it’s hardly a middle-of-the-road eatery. The restaurant’s setting is charmingly eccentric, too.

Another asset is super-friendly service. Consequently, should main courses take somewhat long to arrive — this was common — it’s next to impossible to become agitated at the tiny, hard-working, personable staff.

Besides, diners waiting on entrees can placate their taste buds with entertaining cocktail specials. These have included seasonal coquitos ($9) — rich and sweet, rum-spiked “vegan Puerto Rican eggnog” made with coconut milk scented with vanilla and cinnamon; rosemary-pear gin and tonics ($8) — the rosemary wasn’t detectable, but sweet pear notes playing off lime juice made these go down easily.

Appetizers were thankfully quick to arrive, like Off Center’s fun-to-munch tostones ($7) — audibly crunchy waffle-fry discs made of green plantains and served with tart, lime-and-cilantro-forward mojito sauce.

If you want more picadillo — I did — order the picadillo plato ($14). This was a sizable serving of that zestily seasoned plant-based ground beef blend accented with green olives, raisins and sauteed green and red peppers. Its plate partners were flawless fried yellow sweet plantains, white rice plus soulful and flavorful Puerto Rican-style stewed beans (habichuelas guisadas).

Components in that meal — plantains, rice, beans, peppers, crowd-pleasing house-seasoned imitation ground meat — reappear frequently on the menu. Another dish with them all is mofongo ($14), a Puerto Rican classic.

Off Center’s mofongo starred green plantains properly fried to golden-brown and then mashed and formed into a partially softened, large dense mound. The rib-sticking mound was slightly leavened with lime juice (a nice touch), presented atop picadillo and plated with rice, beans and well-seasoned “vegan chik’n broth.” Although not as garlicky as I usually like mofongo to be, this was an enjoyable dinner.

Jibaritos are sandwiches bound by big, bread-replacing sheets of fried plantains. The OC jibarito burger ($14), made with a doctored-up Impossible patty and served with rice and beans, held together well and I liked it. I’d have liked it even more had one of its crispy plantain sheets not been so greasy.

Another Off Center, umm, off-center quality: This place is a pizzeria, too. It produces pies with impressive New York-style crusts — thin, crispy, toasty and puffy in the right places — that can be adorned with a wealth of vegetarian toppings.

I went with the specialty piñon pizza ($18 for a 12-incher) inspired by piñon, which is often called “Puerto Rican lasagna.” It was good house crust, crushed tomatoes, Impossible sausage, house seasonings, a chosen cheese — plenty of melted mozzarella in my case — plus cilantro leaves and sweet plantains sliced like pepperoni. Characteristically, this “two-fer” merger of conventional pizza and tropical accents had off-center qualities, but its delicious flavors were right on target.

January 4, 2023
Veganuary: Sodexo reports increase in sales of vegetarian and vegan dishes in 2022 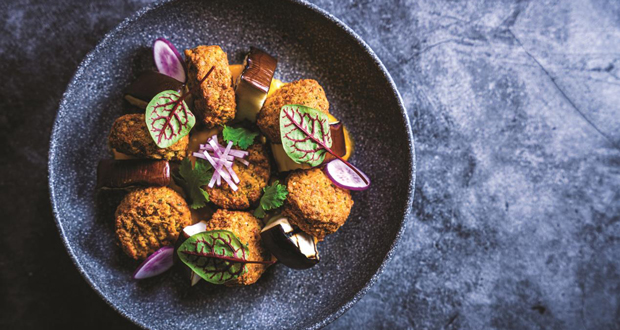 Veganuary: Sodexo reports increase in sales of vegetarian and vegan dishes in 2022