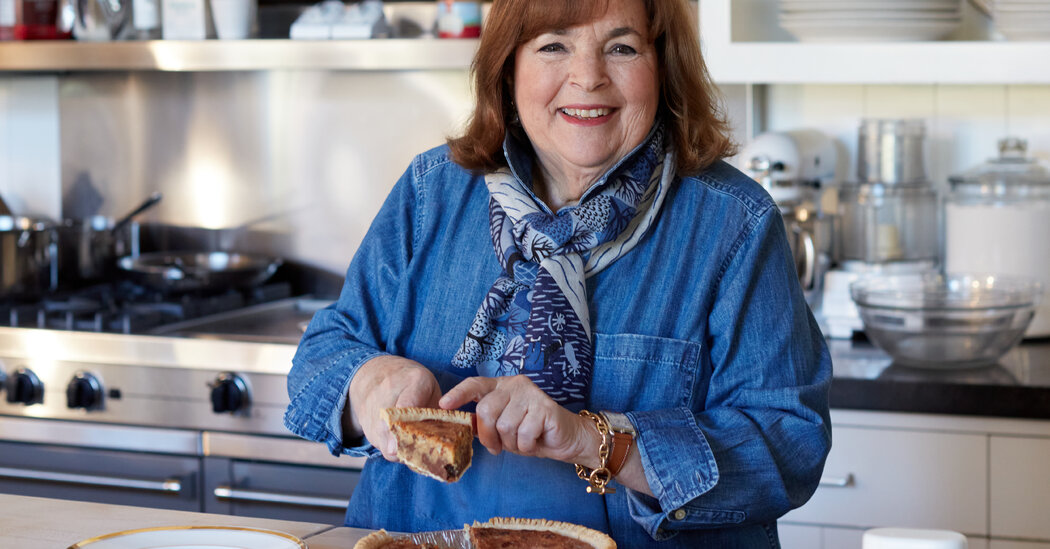 Twenty years ago, “Barefoot Contessa” introduced TV viewers to Ina Garten, framed by stacks of white plates on white open shelves in her kitchen in East Hampton, N.Y. As its title suggested, the show conveyed a down-to-earth ease that felt attainable (even if the Viking stove she sautéed on was not necessarily). Fans could dream about living in that shingle-style home, and then, if they followed her recipes, they could cook just like her.

Ms. Garten has continued to spread the gospel, on TV and in cookbooks (her 13th, “Go-To Dinners,” was published last month), that simple cooking can feel special. Part of that message is her reassurance that “store-bought is fine” — that home cooks should feel free to use premade components, like puff pastry or vanilla ice cream, that save time and perform as well or better than homemade.

So when we asked her to create a classic Thanksgiving feast that incorporated store-bought ingredients, she embraced the challenge — in large part because of the exhaustion she said many home cooks, including herself, have felt over the last few years and are still experiencing now.

“I think just for Thanksgiving, all bets are off,” she said. “Whatever you need to do to get Thanksgiving dinner on the table is OK.”

Creating simple dishes is anything but simple. Ms. Garten approached the task as if it were a scientific experiment, using the rigorous process she applies to all of the dishes she develops. After perfecting a dish herself, she watches as her recipe testers prepare them, and tastes their results. If they hesitate or falter at any step, Ms. Garten will edit the recipe to make sure no detail is missing or unclear. If the dish doesn’t match hers, she sleuths out why.

For these Thanksgiving dishes, she began by figuring out how to replicate her from-scratch versions using ready-made supermarket products. “My goal was that you didn’t know that store-bought thing was in there,” she said. “I want to make store-bought taste homemade.”

In recreating her Parmesan smashed potatoes from “The Barefoot Contessa Cookbook,” Ms. Garten tried every package of refrigerated and frozen prepared mashed potatoes she could find. She ended up simply reheating her favorite brand in a bowl over simmering water and stirring in sour cream, Parmesan, butter, salt and pepper. The technique, requiring only a bowl and saucepan, saved the time and energy of cooking potatoes, and cost less.

She had similar successes with other substitutions: re-engineering her cranberry conserve by simmering canned whole-berry cranberry sauce with fresh apple and orange, and baking her mushroom bread pudding with cubed, preseasoned stuffing mix.

Some ideas didn’t pan out. Canned sweet potatoes in a soufflé didn’t yield the airy rise she wanted. She didn’t like the metallic taste of most jarred and canned gravies, so she included an easy gravy that uses “good chicken stock” — which can be purchased — as part of her recipe for roasted turkey.

For her pecan pie, Ms. Garten found that the frozen crust tasted even better than a handmade one. Because the bourbon-chocolate filling is so rich, it benefits from a crust that isn’t as buttery.

Despite that epiphany, and the fun she had with the assignment, Ms. Garten said there are limits to her reliance on prepared ingredients.

“You now have my entire repertoire of store-bought recipes,” she said — while noting, with a laugh, that all ingredients are technically store-bought. All she wants is to make Thanksgiving simple for home cooks, to give them permission to take whatever shortcuts they need.

Her own holiday plans? “I’m completely tired of cooking,” she said. “So we’re going out for Thanksgiving. I let myself off the hook this year.”

Cranberry juice cocktail tints this martini magenta and gives it a fruitiness that blends well with the orange notes of triple sec. Plumped dried cranberries at the bottom of the glass soak up the drink and reinforce the berry’s tang. The generous dose of vodka can be mixed with the juice and triple sec ahead of time, then shaken with ice just before pouring.

Refrigerated, packaged mashed potatoes can taste homemade when reheated and mixed with rich sour cream, butter and savory Parmesan. They save the time and hassle of peeling, cooking and mashing fresh potatoes, and the result even costs less.

“If you start with whole-berry sauce instead of the canned thing with the rings on it, you’ll get the texture of fresh cranberries,” Ms. Garten said. She discovered that while simmering a can of whole-berry sauce with grated apple and orange zest and juice. With the help of crunchy walnuts and chewy raisins, this sauce tastes wholly homemade.

Cheesy and rich with sautéed onion and mushrooms, this bread pudding is Ms. Garten’s standard proxy for stuffing. Cubed stuffing mix saves the steps of slicing fresh bread into small chunks and then seasoning and toasting them. Soaked and baked in a simple creamy custard, the bagged blend produces a fluffy, creamy, savory casserole.

Even though this centerpiece doesn’t include prepared, store-bought gravy, it does make it far easier to serve turkey hot while keeping it moist. The roasted and carved bird can rest in the gravy for up to a few hours; it’s all reheated just before serving.

Recipe: Make-Ahead Roast Turkey and Gravy With Onions and Sage

If you’ve never had a Kentucky Derby pie, imagine something closer to a gooey, underbaked chocolate chip cookie than to the standard Thanksgiving pecan pie. The ultrarich filling actually tastes better with a store-bought frozen pie crust, which is lighter than a homemade one made with butter.